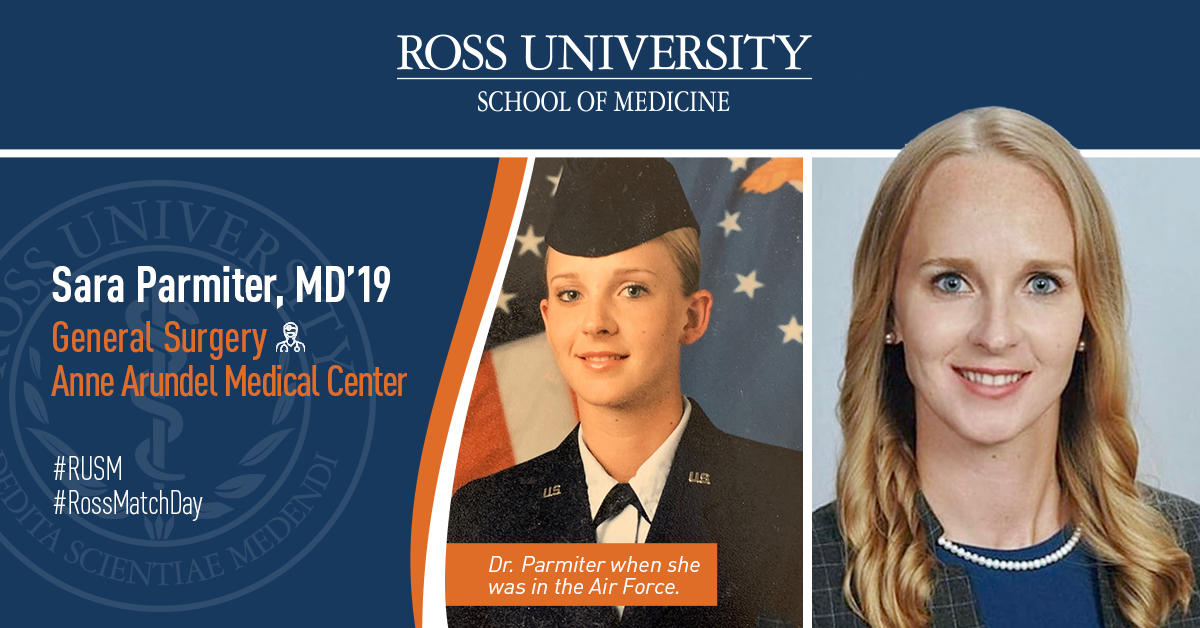 When the opportunity to shadow a practicing anesthesiologist presented itself in college, the spark that inspired Sara Parmiter, MD ’19, a November 2019 graduate, to follow her dream and become a physician was lit; however, her path to becoming one took several interesting and meaningful turns along the way.

“I had always been interested in the human body, but I fell in love with the operating room as a result of that experience,” she explained. “It drove me to delve deeper into anatomy and physiology and organically progressed me into wanting to become a physician,” she explained.

Parmiter started her undergraduate journey at a local community college in California at the early age of 16. When she turned 18, she transferred to a four-year institution and also worked as a personal trainer, but the tuition expenses proved out of reach. She then made the decision to join the Air Force, where she spent the next six years traveling to different countries as an aircraft loadmaster.

“It was the best experience,” she said. “I flew around the world operating missions and absolutely loved it. I learned a lot and really grew up.”

Undeterred from her original goal to become a physician, upon her release from service she used the funds eligible to her under the GI Bill to pay for physical therapy assistant (PTA) school.

“I knew I wanted to be a physician but wanted to work in healthcare to find my niche,” she said. During this time, Parmiter also had a baby who she raised on her own for several years and yet still managed to find the time to fulfill her premed requirements and work full-time as a PTA.

“It was a busy time, but I was determined,” she said.

After working as a PTA for nearly 8 years and obtaining her B.S. in Psychology, she started looking into U.S. medical schools; however, her nontraditional education left her on waitlists. Not wanting to postpone the fulfillment of her dream any longer, she decided to look into Ross University School of Medicine (RUSM) after hearing about it from one of her physician colleagues.

“RUSM was another adventure for me – a very cool adventure,” she said. “I had already done most of my growing up in the Air Force, but making the transition to medical school and being at RUSM, I learned an appreciation for how to study differently. When you’re in undergraduate school and taking chemistry or biology, it’s very easy to compartmentalize your studying. You can’t do that in medical school because it all interrelates and works together. Learning how to prioritize my studying and my family and my extracurricular activities – that was very helpful and something I’ll take with me into practice.”

When asked how it feels to have achieved her dream and be poised to begin residency, Parmiter noted that it’s all still a bit surreal.

“I’ve had this picture of the initials ‘M.D.’ behind my name for a very long time,” she said. “To finally see that come to fruition is exciting – it’s awesome.”

Wanting to stay in the Annapolis, MD, area, Parmiter’s first choice pick was an easy one to make: Anne Arundel Medical Center. She actually worked there for five years as a PTA before medical school and described her interview as “outstanding.”

“You go in super nervous thinking that because you’re a nontraditional student you won’t get the same opportunities, but that hasn’t been the case at all,” she said.

Overall, Parmiter was offered 12 categorical interviews for General Surgery and three preliminary positions even before this year’s ©MATCH (the National Resident Matching Program) results were officially released and she received the news that she had, indeed, matched at Anne Arundel Medical Center.

“I matched into my number one choice,” she said. “I am so grateful right now.”

She continued, “RUSM was my opportunity. If not for RUSM, I wouldn’t have had the amazing opportunity to gain my medical degree. Ten years ago when I started working at this hospital as a PTA, I dreamed of becoming a surgeon here in Annapolis. Now that dream has come true!”

Once she has completed her residency and board certification, Parmiter plans to go “full circle” and rejoin the Air Force as a Reserve Surgeon.

“I want to continue to serve my country and its veterans, and this is my way of doing that. When I was a PTA I saw firsthand the bonds surgeons have with their patients and you could see how much impact they had in such a short period of time. To be able to fix someone physically and have them trust me to do that is the amazing privilege in the world.”