A multilingual scholar who’s zealous about the student academic journey, Ross University School of Medicine (RUSM) Associate Dean of Student Affairs Pranaya Mishra, PhD, has been living the “American Dream” for nearly three years. His Nepal roots and modest upbringing start the story of how this compassionate Floridian treasures each day — sprinkling in humor as he continues to inspire students and encourages them to question everything. 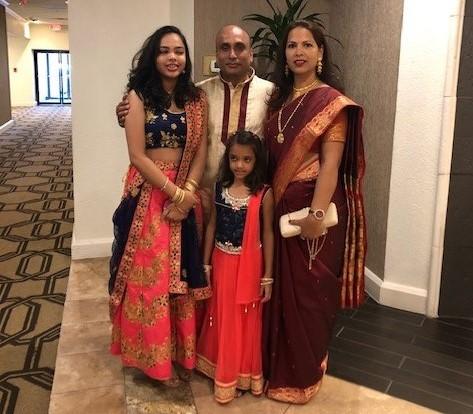 “I tell them to keep the flame of inquisition burning — to keep asking why, how and what. It keeps them engaged in a conversation; they can explore the world with that inquisitiveness. It is rewarding to help students navigate situations and accomplish their dreams,” he said, countering with the biggest challenge — managing student expectations.

The youngest of five children, Pranaya and his brothers willingly veered toward a career in health care, after witnessing the respect and admiration given to their father — a doctor in Nepal in the 1950s who rode horseback to provide home patient care for 30 years. “It’s such an enriching moment when people in your village praise you because you’re the doctor’s son. You cherish that connection.”

Traveling Around the World

Pranaya followed his father’s recommendation to study pharmacy and was awarded undergraduate and graduate scholarships to Bangladesh. Degrees in hand, he moved back to Nepal to work at a medical school and then ventured to Denmark, on another scholarship, to earn his doctorate degree. Starting his career as a professor in Nepal, Pranaya held various other faculty positions before landing an associate dean for student affairs job at the American University of the Caribbean School of Medicine (AUC) in St. Maarten, another Adtalem Global Education institution. Four years later, he joined RUSM.

“I get inspired by the people around me, my colleagues,” Pranaya said about his tenure in higher education. “They do a selfless job for students and the university. I try to emulate that and live moment to moment.”

The father of two daughters, a third grader and college freshman, Pranaya aims to impart two life lessons — the importance of interacting with nature and breaking free from the digital world. “Every moment is spent on the phones. I remind them to enjoy the outdoors and have personal interactions; to visit in person or talk on the phone instead of texting. One-on-one communications are declining; we can’t lose track of being human and maintaining those personal connections.”

Keeping Pranaya grounded is his wife of 20 years — an elementary-school teacher, the family disciplinarian and an amazing cook who hands him kitchen rights on Sundays. Their Hindu nuptials may have been prearranged, a long-abandoned cultural practice, but their relationship thrives on mutual respect and agreeing to disagree.

One of their joint passions is giving back to the less fortunate. They plan to assist students who cannot afford education and patients who cannot afford treatments, a charitable act Pranaya practiced years ago. He also has collected food donations for the poor and cleaned up impoverished neighborhoods.

“We have one life and we have to live it. There will always be negative things, but we have to turn that around with positive thinking and positive action. You should feel lucky with what you have and what you’ve accomplished — don’t ever compare yourself to someone who has more success. Live in the present — do not harp about the past or get lost in the future.”

Met former U.S. President Jimmy Carter, co-founder of The Carter Center in Nepal, which is committed to preserving human rights and alleviating human suffering. “His vision and effort toward building governance is so valuable and needed in third-world countries. He’s spending his retirement making the world a better place to live.”