“It feels amazing that someone out there is alive because of what we did.”

A few months back when Coverly Gym reopened, Ross University School of Medicine (RUSM) classmates Muhammad Aboghanim and Ian Parker were eager to get back into workout mode — to relieve stress and finally hang out since the Barbados government’s COVID-19-related curfew had relaxed. A little cardio. Some weight conditioning. They never imagined they would put their 1st and 5th semester respective medical school trainings into play. But thankfully, both men acted instinctively when they saw an older man appear to be in cardiac distress.

“He was a little older, on the tread mill next to me and going hard,” recalls Muhammad. “A few minutes later, I looked over and saw him flat on his back, shriveled with his arms up. At first, I thought he was cooling down because he was really into the workout but then I saw his glasses fall away. He was biting on his tongue, had agonal breathing and was starting to turn blue. I couldn’t find his pulse.”

Flagging down Ian from the next room, Muhammad started cardiopulmonary resuscitation (CPR). The duo elevated his legs to prepare for hypovolemic shock, pushed his jaw forward to keep his airway open and Ian successfully used the automated external defibrillator (AED). Five minutes later, the man turned blue again. Gym personnel brought over a blood pressure cuff and the two tag-teamed CPR efforts for the next 45 minutes until the ambulance arrived. The student doctors ensured the paramedics used the cervical collar to support his neck and reminded them to keep using the bag-valve-mask ventilation.

“We weren’t sure what was going to happen. We had no way to know,” recalled Muhammad who worked as an emergency medical technician for four years before starting at RUSM in January. “I never thought I’d see that sight again except when I was wearing my uniform and with a partner. When I saw him lying on the floor, I knew I had to act fast, which is why I grabbed Ian. It’s a huge responsibility — every second counts. It can literally be the difference between life and death.”

Ian had worked in critical care and knew someone’s vitals could change in the blink of an eye, which is why he reacted swiftly. “We didn’t go to the gym prepared to help someone having a heart attack. It was just a normal Monday afternoon. We didn’t have any equipment — no cardiac monitors or emergency medicine equipment. It was just us and our bodies were the tools. It all goes back to the basics — the ABCs they teach you in school — airway, breathing and circulation. We redid rounds of CPR, kept him upright for circulation to his core and monitored his heart. We pretty much did everything we could think of to keep him stable until the ambulance arrived.”

Thanks to Muhammad and Ian’s quick reflexes and selfless efforts, the local Barbados man not only survived but fully recovered.

“He hugged me,” Muhammad said about the man’s return to the gym a few days later to thank his rescuers. “I was shocked to see him standing on his own. That was everything; it was very rewarding.” The man told Muhammad that he is an active hiker and practices a healthy lifestyle; he expressed his gratitude. “I just did what anyone else would have done. It feels amazing that someone out there is alive because of what we did.”

About the Heroic Students

“Some doctors have told me they can go through their whole career and never experience what we did so I am really grateful,” Muhammad said. Ian concurred — “Friends and relatives said, ‘you haven’t even graduated from medical school and you just saved someone’s life.’ I have a better appreciation now of having skills in addition to education. This just reinforces that this is the right path for me.” 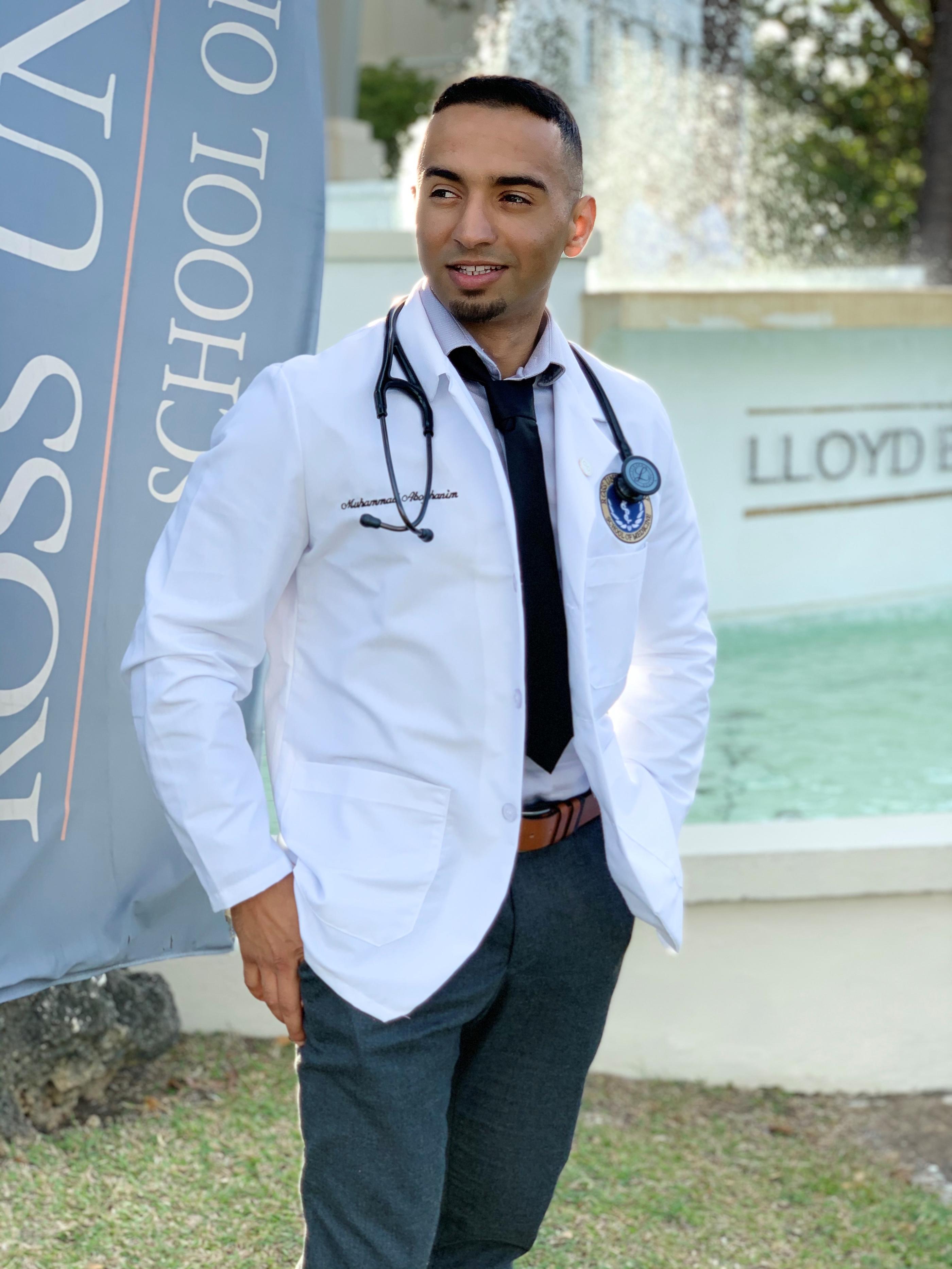 Born in the U.S. and growing up in San Francisco, Muhammad spent summers in his parents’ home country of Yemen. He plans to specialize in internal medicine with a focus on surgical oncology, hoping to advance cancer research. Ironically, Muhammad was drawn to medicine when he witnessed a relative collapse from a heart attack, and no one could provide immediate care.

One of five children who grew up in Indiana, Ian plans to become an internist, following the healthcare careers of his parents — an intensive care unit nurse and anesthesiologist. Before enrolling at RUSM, he spent time as a patient care technician in a progressive care unit. “You never appreciate how humbling it is to be a medical professional until you work with a truly ill patient. I learned to appreciate what it means to be a physician who plays such an intimate role in a patient’s care.”

Regarding their life-saving efforts, Ian encourages everyone to undergo CPR training. “Even if you are not a medical student or in the healthcare field, anyone can obtain the basics. I hope this is a wake-up call for everyone to get trained so they can assist when they see someone in need.”

These two heroes were featured in Barbados Today, The Nation Newspaper and Evansville WKDQ 14 News.

If you know a Hero Among Us, please share it with us.

Visit RUSM for more information about earning a medical degree.

Care for Caregivers
and Students