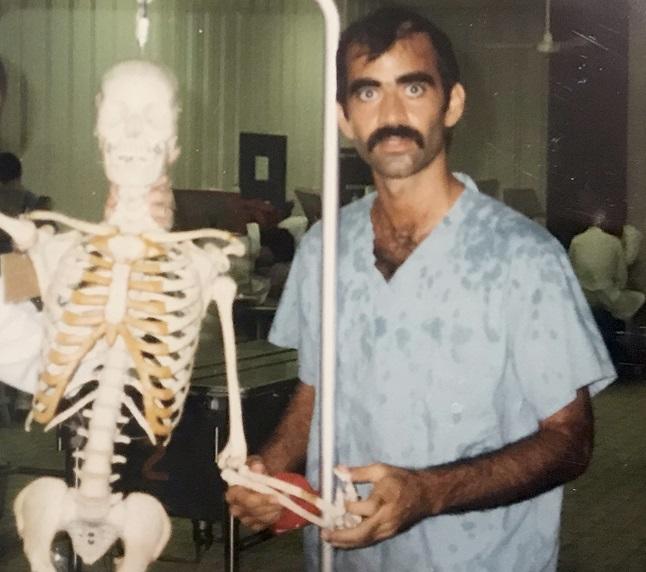 Dr. Amir Mirza Alikhani understood what it was like to move far from home before he started at Ross University School of Medicine in Dominica in 1984. He emigrated in 1977 from Tehran, Iran to attend St. Louis University for his undergraduate and graduate studies.

Dr. Alikhani was unsure how he was going to pay for his education beyond his first semester at RUSM, but he started his MD journey with high hopes and luck on his side. Fortunately for him, his first semester class was so large, the institution asked select students to find on-island housing, allowing him to have affordable living accomodations. He also worked as an Anatomy Teaching Assistant during a majority as he studies in Dominica, putting himself through medical school.

Due to limited funds and because he was not a US citizen during his medical school studies, Dominica was truly his home for two years. One of his favorite memories in the final weeks in Dominica was a weekly countdown chart he and his peers created. They would track their weeks left on the island by the very visible commercial boat they fondly called the 'banana boat', which would come to Dominica to collect bananas for US and Europe. Every Friday morning, the locals would descend from the mountains with their bananas ready for purchase.

Dr. Alikhani completed his clinical rotations in Chicago and St. Louis before beginning residency at Waterbury Hospital in Connecticut. At that time, matches were published through national newspapers and following the official announcement, graduates received a letter with their official placement. Dr. Alikhani was very confident that he’d get matched, so much so he didn’t check the papers the day the news was released. He only found out he wasn’t initially matched by his cousin, a fellow medical student. His cousin shared there was an opening at the program he was matched at, Waterbury Hospital. Given the remaining match spots were highly competitive, Dr. Alikhani quickly called the Residency Director and expressed interest. They promised to hold the spot for him but in the meantime, another Director promised the spot to a graduate from Harvard. Luckily the original contact at the office stayed true to his word and Dr. Alikhani started residency shortly thereafter. Throughout residency the Residency Director kept an eye on him, knowing his spot was taken away from a Harvard graduate.

After completing his residency, Dr. Alikhani took a 3-year fellowship at Yale-New Haven Hospital in pulmonary critical care medicine from 1991-1994. He then joined Fort Washington Hospital in 1994 and served as director of the ICU from 1996-2018. He recently retired from his post at Fort Washington Hospital, but is currently the attending core instructor at the University of Maryland/Capital Region Hospital and an Associate Clinical Professor at RUSM. As the first physician in the family, Dr. Alikhani inspired the next generation to pursue medical careers. He has two nephews that are also RUSM alumni, Dr. Armin Kamyab '07 who landed a competitive surgery internship at Mayo Clinic and is currently Chief of Surgery at Cox Monett Hospital and Dr. Cyrus Tanhaee, MD '13, who is a Pediatric Anesthesiology fellow at University at Buffalo.