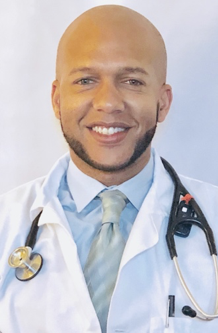 Dr. Gearing is board certified and is a fellow of the American Academy of Pediatrics and has been practicing medicine over the last six and a half years with the past six (6) being an Attending Pediatric Physician at the Children’s Medical Group in Poughkeepsie, New York. He was also the attending pediatric physician at the Anderson Center for Autism where he managed the care of residents with Pervasive Developmental Disorders. Dr. Gearing also held the position as the Consulting physician at the Astor Home for Children and Families where his role was to assess the medical needs of children with an array of mental health disorders.

Dr. Gearing’s passion for teaching preceded his career as a physician. While a graduate student at Barry University in Miami, Florida, Dr. Gearing was appointed as a teaching assistant for Comparative Anatomy and Physiology. His role as a teaching assistant continued in the areas of Gross and Neuroanatomy while at Ross University in Dominica, as well as being a tutor of biochemistry and physiology. While as a resident, his role as an educator continued, often delivering presentations, morbidity and mortality conferences, and lectures to medical students. As a chief resident at SUNY Downstate Medical Center/Kings County Hospital, Dr. Gearing was responsible for teaching nursing and medical students, as well as residents and interns.

Over the last few years, Dr. Gearing was an attending pediatric physician for the clinical rotation for the Marist College Physician Assistant Program in Poughkeepsie, NY. He is now transitioning from clinical practice into clinical teaching.

Impact of Diphtheria on the Life and Work of WEB DuBois; 1899 Implications for today