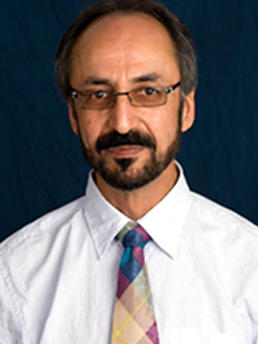 Chair, Department of Medical Foundations and Professor of Physiology

Dr. Hashim Shams graduated from medical school (M.D.) from the University Essen, Germany in 1982. His doctoral dissertation (equivalent to PhD) was awarded with highest distinction from Ruhr University Bochum (RUB) (Summa Cum Laude) and earned him the prestigious University Prize of 1986. Dr. Shams continued his academic career in research and teaching at RUB for 25 years with research sabbaticals at University of California San Diego (UCSD) in 1986 and Case Western Reserve University (CWRU), Cleveland Ohio in 1990. His research interests were in the field of pulmonary gas exchange, control of breathing, comparative physiology and translational research. He was heavily involved in teaching medical students from the beginning of his career and taught in all areas of physiology and is well experienced in all types of teaching.

At RUB, he held different academic positions from research fellow to professor. He was a member of the Teaching and Learning Committee and the Curriculum Development and Design Committee. He was heavily involved in development of an integrated, clinically oriented, student-centered curriculum with emphases on active learning and small group teaching. Dr. Shams was an approved examiner in the German state medical examinations for basic sciences (Physiology). He is licensed physician and certified physiologist.