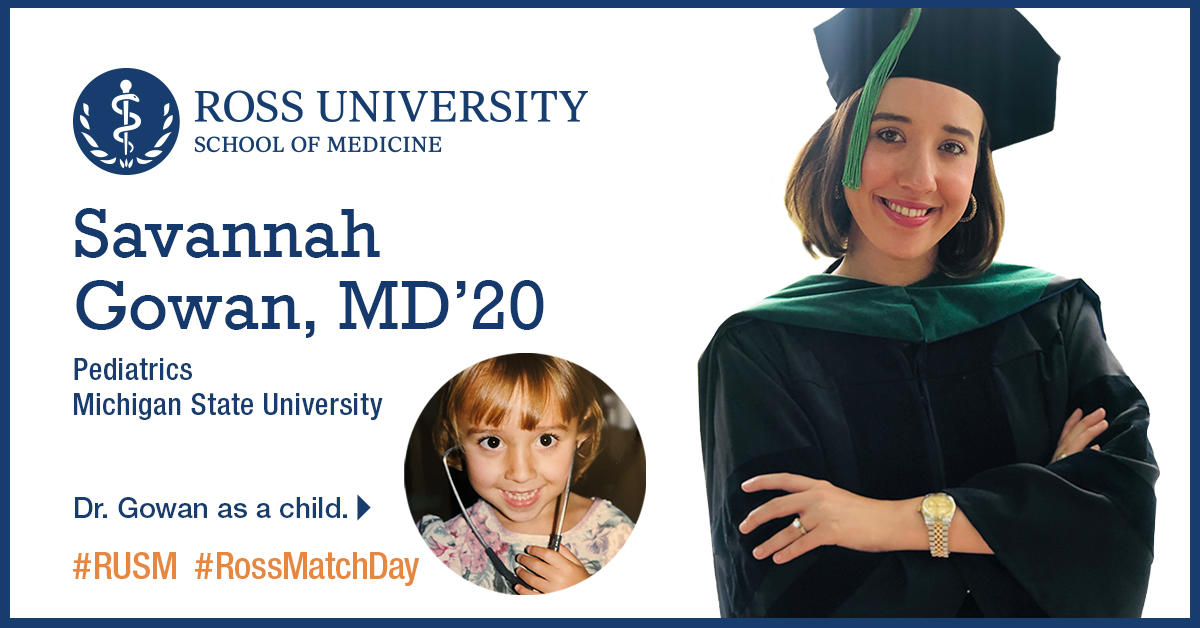 The daughter of an Emergency Medicine pediatrician, Savannah Gowan, MD ’20, knew she wanted to follow in her father’s footsteps since childhood.

Raised in Texas, Gowan was a premed major at Texas A&M, and also worked as an EMT while in college.

“I’ve been grooming myself for this career my whole life,” she said. “There was never any other path for me.”

After graduating, Gowan began applying to US medical schools – first in Texas, and then more broadly. When she didn’t get in, she started looking into other ways to connect with the US schools and show them what a great candidate she was. In the process, she discovered Ross University School of Medicine (RUSM).

“My dad has always said there is more than one way to the top of the mountain,” she explained. “I went to a health fair hoping I could connect with some of the medical schools I’d applied to, and in the midst of it, I found RUSM. I interviewed, applied, and was in Dominica a few months later.”

Gowan’s fiancé, Brett Hinsley, MD ’20, was a paramedic at the time, and when she told him of her plans, he decided to take the MCAT and apply to RUSM as well.

“We ended up going to RUSM together with our dogs,” Gowan said. “It was great.”

Given her upbringing, Gowan was under no illusions as to the rigor of medical school. Still, she noted, it was no joke.

“Everyone tells you medical school is hard, and that’s true whether you go to medical school in Texas or Harvard or RUSM,” she said. “At the end of the day, it’s up to you to perform at the level you’re expected to. I ended up not doing well on my first exam at RUSM, but that was the last test I did poorly on.”

Gowan is thankful to RUSM not only for giving her the opportunity to become who she’s always wanted to be, but also for helping her build her resilience and belief in herself.

“RUSM makes you tough, in a good way,” she said. “No matter what comes your way, you learn to just go with it. Going to RUSM made me very adaptable.”

Gowan noted that those strengths will stand her in good stead in her chosen specialty of Pediatrics.

“I actually went through most of medical school pretty certain I was going to specialize in OBGYN,” she said. “But from the start of my Pediatric rotation, I was hooked.”

When asked what it was about Pediatrics that made her change her mind, Gowan replied, “I liked the idea of watching my patients grow up. Also, kids are so resilient, and that’s something I can really relate to. That’s the kind of patient I want to work with.”

When it came time for Gowan to enter the National Resident Matching Program® The MATCH℠, she and Hinsley had the added pressure of trying to couples match – her in Pediatrics, and him in Emergency Medicine – both very competitive specialties.

“I got flooded with emails initially – over 30 Pediatric interviews,” she said. “We realized we had to be strategic though.”

She continued, “There’s a lot of mixed advice on couples matching. Mine is that you really have to put yourself out there and contact these hospitals and advocate for yourself and your partner.”

Another piece of advice Gowan and Hinsley received was to also consider applying to less competitive specialties.

“Neither of us was willing to do that,” she said. “We knew we’d be unhappy in anything else but the ones we were set on.”

In the end, their perseverance paid off when they received the news that they had matched at hospitals in their chosen specialties within 30 minutes of each other.

“I matched at Michigan State, and he matched at Ascension Genesys Hospital,” Gowan said. “Finding out was such a relief. You work so hard in medical school, but don’t see the fruits of your labors till the very end when you see that M.D. behind your name, or when you have that match result and a job that’s secure. I’ve dreamt of being a doctor my whole life, but putting on that Michigan State lab coat that has my name on it – that’s a day I’ve been dreaming of forever.”

As she prepares to begin residency, Gowan said that she is most looking forward to having more autonomy and getting to know her fellow residents.

As for her dad? He couldn’t be prouder, according to Gowan.

“He’s really happy for me, and I’m so glad I’ve been able to make him proud because it’s all I’ve ever wanted,” she said. “RUSM gave me the chance, and sometimes that’s all you need. Because of RUSM, I know that I can do anything.”