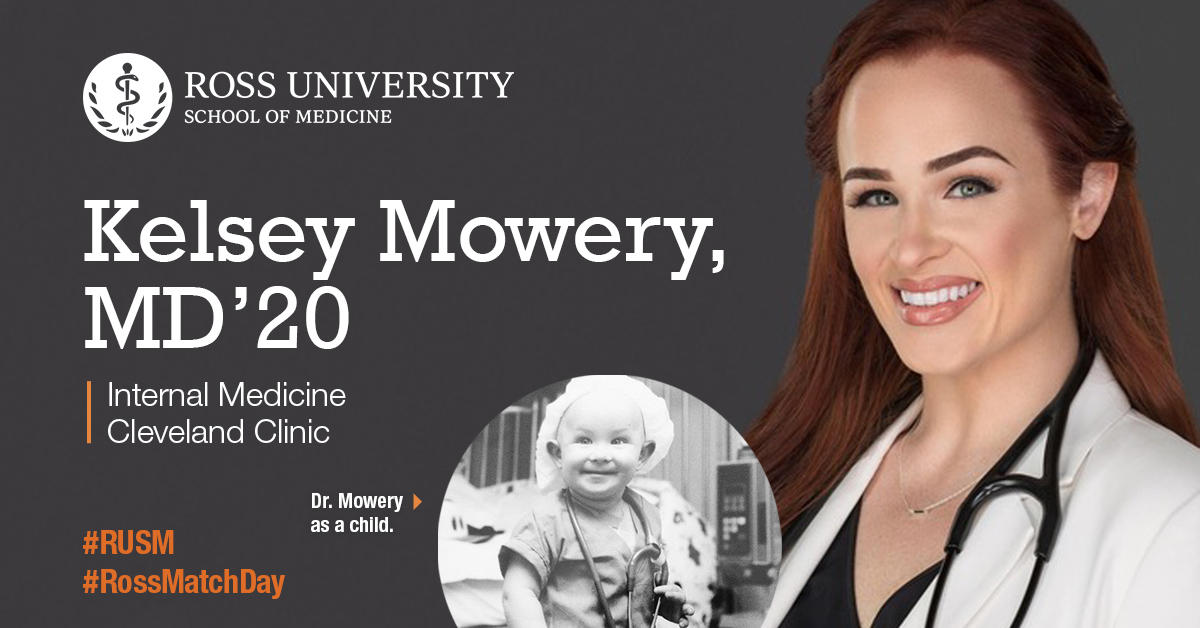 Diagnosed with acute myelocytic leukemia when she was six months old, Kelsey Mowery, MD ’20, spent a great amount of time in and out of a hospital throughout her childhood. Her first words were spoken there. Her first steps were taken there. And even after she went into remission, Mowery still visited the hospital for checkups regularly for years afterward.

“St. Jude Children’s Research Hospital became my second home,” she said. “I was always surrounded by medicine throughout my lifetime. Overcoming such a tragic illness, I grew up compelled by a powerful calling to give back. As I grew older, that fire within me only grew stronger – but I wasn’t sure how to fulfill that calling.”

For a start, Mowery began volunteering within her community, as well as at St. Jude and the Leukemia and Lymphoma Society. But while the work was rewarding, she found herself wanting to do more.

Inspired by her mother who became a registered nurse following her remission and the nurses who had cared for her in her early years, Mowery’s next move was to pursue nursing school.

“I went to college with the intent that I would become a registered nurse. And then one day, sitting in chemistry class, it dawned on me that I could go to medical school to become a physician. Being a physician would allow me to give back by saving lives from illnesses the same way I was saved from my own and would fulfill this calling,” she said.

Having decided to pursue this new course of action, Mowery reached out to a friend from college who was in his fourth semester at Ross University School of Medicine (RUSM).

“I’ve known him for years and, I knew I could trust him. He said very good things about Ross. So, I decided to send in my application. I did apply to a few US schools as well, but I did not get accepted. I did not want to wait another year to apply to US schools. I wanted to go for my dream,” she said.

She arrived in Dominica 20 hours before Tropical Storm Erika hit.

“I didn’t have a lot of time to prepare, but what I did have was a group of fellow students whom I had met during my layover in Barbados, and we really stuck together. I think it says a lot about Rossies – we support each other and remain friends for a lifetime,” she said.

Mowery did struggle academically during her first semester, and stressed how important it is to her to share that fact with prospective students so that, should they find themselves in a similar situation, they know they are not alone.

“Medical school isn’t easy, and I knew that going in, but until you face it firsthand, you don’t really understand the difficulty. To anyone who wants to pursue medical school, my advice is to expect that the first few months are going to be very tough, but you will learn to adapt and handle the amount of information given to you. The sacrifice will be worth it. Throughout this journey, you will have gained more than just knowledge. You will have also learned so much about yourself and what you are capable of. That strengthening of character is what will prepare you when any challenges and/or obstacles arise in the future.”

Part of the reason Mowery struggled was due to the fact that she is hearing impaired and needed accommodations to help her academically. Tropical Storm Erika caused a delay in obtaining all of the required documentation needed. Once her paperwork arrived and the accommodations were put into place, things completely turned around.

“I shined at that point,” she said. “And I share all of this simply to let others know that there are going to be obstacles, there will be bad days, and the challenges will seem unrelenting. There is light at the end of the tunnel. If you fall, stand back up, brush yourself off and keep moving forward. Your fellow peers, and Ross, will support you. Don’t give up.”

Even before Mowery began her clinical rotations, she had her sights set on the Cleveland Clinic Florida as her top choice in The MATCH℠ (the National Resident Matching Program®).

“Cleveland Clinic is currently ranked number 1 in South Florida,” she said. “I wanted to be a part of a team that provides high-quality care to patients, as well as excel in the research and educational opportunities the program has to offer. Once I rotated there and interacted with the residents, I felt like I was already a part of the family. Cleveland Clinic Florida was at the top of my list.”

However, Mowery understood all too well that the feeling needed to be mutual. So, she did her due diligence and applied to programs all over the country, from which she received many invitations to interview.

“It was a busy MATCH season for me,” she said. “Trying to complete my clinical rotations, studying, and going on interviews at the same time was quite the challenge, but I was grateful to have so many opportunities.”

When that Monday came for applicants to know if they had matched or not, Mowery – like many of her medical school colleagues – was holding her phone in nervous anticipation.

“I turned everything off, sat on the couch quietly and waited. When that first email came, so much weight was lifted off my shoulders. However, that relief was only temporary knowing that I now had to wait until Friday to know where I matched,” she said.

When the time came for the second email, Mowery was again sitting, phone in hand.

“I opened that email and saw where I had matched [at Cleveland Clinic Florida]. I instantly started trembling,” she said. “I couldn’t believe it. Before I called anyone with the news, I had to double and triple check that email. I kept telling myself ‘this is unbelievable.’ I feel so honored.”

When asked why she chose Internal Medicine (IM), Mowery explained that it wasn’t until her IM core at Jackson Memorial Hospital in Miami that she made the decision to make that her specialty.

“It was my first week on the wards, and a call came in with an admission for my team. The new admission was an elderly patient with symptoms of acute shortness of breath. It was quite the workup as the case became complex rather quickly.”

Mowery went on to note that as the diagnostic process progressed, she found herself becoming more and more invested in this patient’s care.

“Ultimately, she was discharged in stable condition and I was able to follow up with her a couple of weeks after her hospital stay. That patient’s hospital course was multifactorial, that involved multiple organ systems, as well as social and environmental factors. That case will stick with me for the rest of my life. Not solely due to how challenging the case was, but how it opened my eyes to the world of Internal Medicine.”

She has a love for hematology/oncology as well, and plans on applying for fellowship after residency. She also plans to become more active in cancer research.

“I want to help fight against the war with cancer and to help those who are fighting such battles that I had almost lost myself years prior,” she explained.

As she reflects on how far she has come, and the road ahead, Mowery noted that she is grateful for the support she received throughout her medical school journey.

“I’m so eternally grateful that Ross University [School of Medicine] gave me this opportunity and the tools necessary to achieve my dreams. Weathering the storm that began the day I landed in Dominica, literally, and that has now ended as I begin my new chapter, I wouldn’t have wanted to experience medical school with any other institution. Ross University will always hold a special place in my heart. To me, Ross University is family.”