An engaging conversationalist with a realistic viewpoint and inspirational perspectives, Seeth Vivek, MD, DLFAPA, brings new meaning to the importance of mindfulness. The associate dean of Clinical Sciences and chair of the Department of Psychiatry at Ross University School of Medicine (RUSM) understands the fortitude it takes to succeed in the medical world and brings firsthand knowledge to aspiring students. 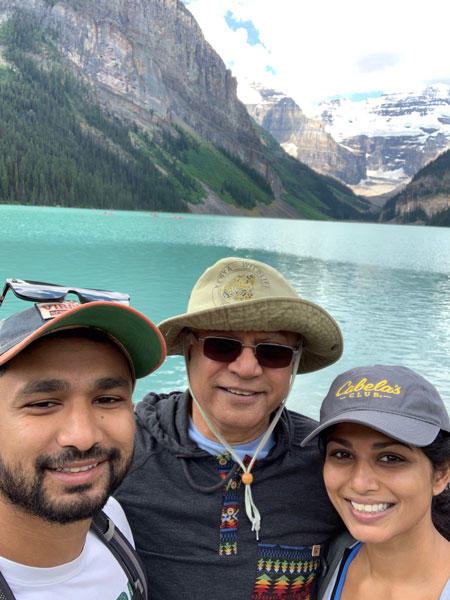 “I have always been drawn to people and their personal stories,” said the psychiatrist who spent the last three decades treating patients at Jamaica Hospital Medical Center in New York. “As our students will learn, a good psychiatrist listens and observes. We treat patients with empathy and compassion, providing emotional support during challenging times. We all have finite time on this Earth, and we have to triage what is important and less important. Helping a friend through a crisis is way more important than worrying about something that may or may not happen years from now.”

The witty educator remains humble and private about his early academic success that led him to residency in his early 20s. “I think it was only five years ago that I was 25 years old,” he joked. “Now I’m somehow older and I’m not sure how or when that happened.” Starting as a psychiatry instructor at Mount Sinai Medical School and Albert Einstein College of Medicine, Seeth continued teaching while adding clinical and administrative responsibilities. Within a few years, he was tapped by Jamaica Hospital leaders to build a Psychiatry Department. As the founding chair of the department, he instituted residency training, fellowship programs, externship programs and medical student clerkships, which connected him to students and faculty at Ross University.

Before retiring from Jamaica Hospital in May 2019, the RUSM Dean and Chancellor invited Seeth to join the university and create a standardized training program for clinical students across all hospital affiliates. “Even though I had been teaching medical students for over 30 years, I didn’t think I’d ever join a medical school and help run a program. It’s been very rewarding.”

Born and raised in India, Seeth is the oldest of four children. He remembers his childhood as an adventure — moving to 10 different cities within India as a result of his father’s job with the government. When he arrived in Queens, New York to start residency in 1976, he planned to return home but quickly realized he belonged in the United States. Though he never forgot his roots — “I have a conversation with my mom every day at 9 pm our time, 7 am her time. She’s 95 years old but she has a better memory than me. She’s fully engaged and argues politics and sports with me. I feel blessed.”

Seeth describes his younger self as the “responsible one” who took his father’s advice to join the debate team, the cricket and sprint teams, and learn current events. He knew early on that medicine was his calling, inspired by his uncle — a general practitioner who worked until his last day at age 91. “He was held in high regard,” Seeth said, recounting patient stories of how his uncle saved lives and delivered babies. “You could sense his personal satisfaction and just how meaningful it was to make a difference.” During medical school, Seeth found himself drawn to patients whose physical symptoms could not be explained by a physical diagnosis. He noticed that physicians were often uncomfortable discussing feelings with patients and fearful that such a conversation might inadvertently reveal their own vulnerabilities. “Patients were referred to by their diagnosis and room number. I started to sit and chat with them to make a connection.”

That may have been the beginning of Seeth’s intuitiveness, a mindset he practices with students and his two adult children, who are attorneys. “They joined the other tribe,” he laughed. “I tried, by example, to help them become well-rounded human beings — combining a love of relationships, activities and work, and then also being curious, creative and trying new things; always staying positive.”

Leading the way with an optimistic attitude is Seeth’s wife Jovita, a fellow psychiatrist who is like minded, intellectually inspired, a travel enthusiast and selfless. She currently works with the homeless in New York City. Also noble is a program Seeth began years ago — a free mental-health clinic for South Asian immigrants. Partnering with a network of 12 psychiatrists of Indian origin and a NY hospital, the team provided mental-health services every Saturday for seven years until hospital policy changed.

Seeth and Jovita are considering resurrecting the same sort of service, this time geared toward youth or the homeless population. “Depression and suicidal ideation are so high, especially among adolescents. And I see homeless people wandering and talking to themselves. There has to be something we can do for the thousands of people in need of care. We have received so much and we want to give back. Everyone deserves to be healthy and mentally stable.”

In New York During 9/11 Attacks

“In the middle of my psychiatry lecture to family medicine (FM) residents, the FM department chair called me out and suggested canceling the lecture, saying he’d tell me why later. It turned out the first plane had hit the World Trade Center. That day will forever be etched in my mind. Our hospital immediately began working on an emergency response and setting up medical and mental-health response teams. We emptied the hospital the best we could, put hundreds of cots in the corridors and parking garage, preparing to see a lot of injuries. The sad irony is that there weren’t many injured people; they either survived or died.”

Effects of COVID-19 on Those Already Struggling

Retiring from Jamaica Hospital Medical Center in May 2019 after 32 years, Seeth continues to see patients while working full time for RUSM. He is board certified in general psychiatry, psychosomatic medicine, addiction psychiatry, forensic psychiatry, geriatric psychiatry and addiction medicine. Seeth stresses the importance of recognizing and treating mental illness as early as possible, stating one in five adults suffer some sort of psychiatric illness in any given year and one in 20 adults suffer from a serious psychiatric illness. He shares his thoughts about how the pandemic has affected people differently, ultimately playing havoc with those already suffering from mental health and stability issues.

There are very few people who have not been affected by COVID-19. People have reacted in a variety of ways. Many are very scared and respond with a phobic stance. Some are in complete denial and wander around without masks and adopt risk-taking or impulsive behavior. They think it is macho to affirm that they’re invulnerable, but there is usually an underlying counter-phobic mechanism.

The other group of people are relieved they don’t have to go into work. Maybe their commute was onerous, maybe they have a difficult relationship with their boss or colleague, or they are socially inept so not having to deal with human beings is a relief.

For the vast majority, they are living in isolation. Working from home or in close corners with family members brings its own set of issues. For most, it’s the fear of being infected and the lengths to which people will go to wash objects that come from the outside or ensuring there is only one person on the elevator. They may fear they have been exposed and brood over it for days on end. There are people who test themselves over and over even though they’ve insulated themselves from the outside world.

Advice needs to be personalized. If someone already has obsessive-compulsive disorder, with COVID, that becomes so much worse. If they used to wash their hands 10 times a day, now it could be 100 times a day; if they used to spend an hour in the bathroom, now it could be four or five hours. My advice for that person would be different than someone who experiences frequent panic attacks. If depression had been controlled and stable for many years, now it could recur. Patients who ascribe to delusions or conspiracy theories are now in high gear and the storyline is connected to COVID in one form or another.

The most important thing is for people to stay in touch with their doctors or reach out to a professional for help. And everyone should keep in contact with loved ones.

Won a hotly contested race for general secretary of the student union, fulfilling a campaign pledge to convert an auditorium to a movie theater and host weekly movie nights

Fulfilled family resolution to travel to different locations every year; when his children became teens, they had visited 15 countries; now they have the “travel bug” and have each traveled to more than 100 countries