An Advocate for Diabetes Prevention and Management, Dr. Megan Zaleski-Guerrero Applauds Advancements in the Field

With all the uncertainty and craziness that abounds in 2020, Ross University School of Medicine (RUSM) alumna and endocrinologist Megan Zaleski-Guerrero, MD, shines a light of hope and raises spirits for those suffering with diabetes — moving closer to a cure for type 1, better treatment options for type 2 and technological advances for both. 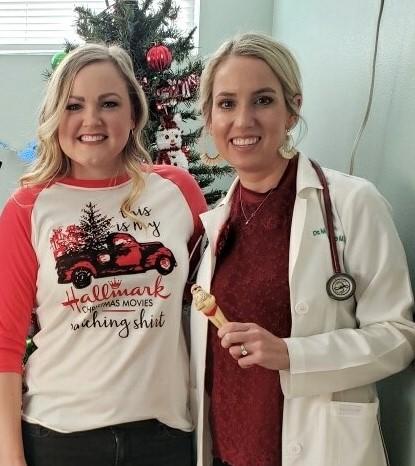 “It’s an exciting time to treat patients with diabetes,” said Zaleski-Guerrero, who’s in private practice. “We have more classes of medications to offer our patients, allowing for a patient-specific treatment plan that helps minimize adverse effects.”

Diabetes is a chronic disease in which either the pancreas is unable to produce insulin or the cells in the body do not respond to it. Insulin is a hormone produced by the pancreas that regulates the amount of glucose in the blood. A lack of insulin can result in diabetes. Type 1 diabetics have an immune system that destroyed their pancreas and therefore, doesn’t produce insulin. Type 2 diabetics have a pancreas that produces insulin but the cells in the body are resistant to it.

“Glucose is the major source of energy for the cells in your body,” Zaleski-Guerrero explained. “Think of a cell as a house, and insulin as a key to the front door. Glucose is outside of the house and needs to enter in order to provide fuel. In a normal person, one key (of insulin) will open the door and let glucose in. With type 1 diabetes, there are no keys (insulin) so glucose is unable to enter and as a result, the glucose accumulates outside, and the house or cell is deprived of energy. With type 2 diabetes, there are keys (insulin) present, but they do not work well and again, the door is unable to be opened, resulting in an accumulation of glucose outside.”

Type 1 diabetics can eat all the right foods and exercise but still need daily insulin to maintain acceptable blood glucose levels. The trick is getting the right amount, which has historically been determined by frequent finger sticks to monitor blood sugar and subsequent insulin injections — four to six times daily. “Now, there are 24-hour continuous glucose monitoring devices that communicate directly to insulin pumps to provide automated insulin delivery. This not only eliminates the frequent finger sticks and insulin injections, but also alerts patients to high and low blood sugars, serving as a safety device. It’s almost like having a pancreas.”

The treatment for type 2 diabetes, which is far more common, focuses on lifestyle modifications, emphasizing proper diet and exercise. The goal is to reduce fat tissue, which contributes to insulin resistance. But many medications used to treat type 2 diabetes lead to weight gain. “Typically, the more weight you lose, the better your insulin works. However, it is hard to motivate someone to exercise when the weight-gain promoting medications are fighting the progress. Now there are new medications that promote weight loss, which helps prevent disease progression and has cardiovascular and kidney benefits.”

Is That a Carb?

To stay healthy, Zaleski-Guerrero recommends both diabetics and non-diabetics eat carbohydrates in moderation, first learning which foods qualify. “Often times, we underestimate our carb intake simply because we’re unaware that carbohydrates are not just bread and cake, but also present in healthy foods like fruits and vegetables.”

While poor diet and lack of physical activity can lead to development of diabetes, genetic predisposition and ethnicity also play a role. “Hereditary patterns of insulin resistance are complex but can be passed down from generation to generation, and if introduced to a carb-rich diet and sedentary lifestyle, it’s the perfect storm.”

Originally from the Midwest, Zaleski-Guerrero now lives in Florida with her husband, who’s a nephrologist, and their two young children. “There’s a lot of overlap in our fields so we can pick each other’s brain and give second opinions, but we also have a lot of challenges and the same high stress.” For fun, the family visits local hot spots and spends time at the beach. Telemedicine has worked well for the couple, whose patients still receive quality care without the health risks of in-person visits.

Zaleski-Guerrero derailed her initial career path as a hairdresser after she began working at a local physician’s office. The doctors not only piqued her interest but remain her mentors today. “They had fascinating equipment and interesting conversations,” she said about her high-school job. “They started coaching me before I even knew I’d be following a path in medicine. I can’t believe I almost missed out because I love what I do. When I went to medical school, I quickly learned the benefits of studying and discipline. Med school is no joke; I had to buckle down. But I wouldn’t trade those lessons because now I get to treat rare conditions and motivate patients about their lifestyle. There’s no greater feeling than working with patients and celebrating their successes.”

Alumni
and Care for Caregivers