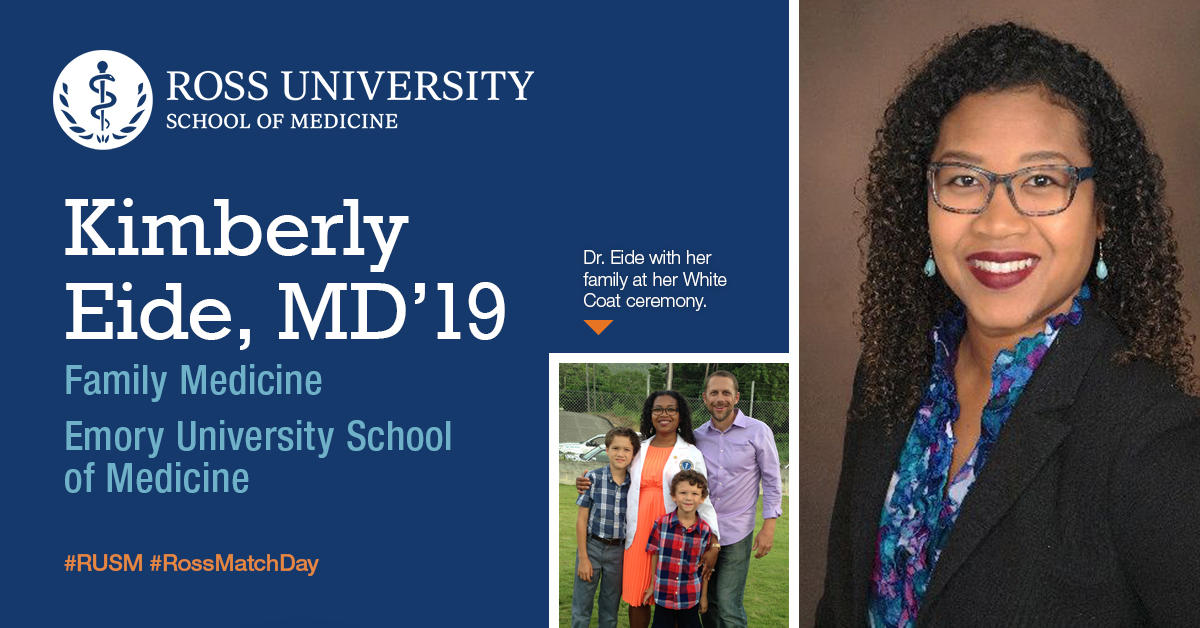 Beating the Odds to Fulfill Her Calling: One RUSM Alumna’s Journey

Ever since she was a little girl growing up in the inner city of St. Louis, Kimberly Eide MD’19, has been taking care of others. Her grandmother, neighbors, and extended family members all received the benefit of her listening ear and helpful nature. To Eide, taking care of others was just second nature.

“For me, becoming a doctor was a natural progression. My mom would always say, ‘You’re going to be my doctor someday,’ so that sort of started the seed, and then one day I declared, ‘I’m going to be a doctor,’ and that was that,” she said.

As a first generation college student, Eide journeyed along a largely unfamiliar road to get to medical school. She set out as a premed major at St. Louis University, but changed her major to Business her sophomore year for two reasons: first, because she was struggling with physics, and second, because she felt strongly that it was her responsibility to help take care of her mother, and she thought that having a business background would help her make better financial decisions for herself and her family.

“After seeking help from my physics instructor, he told me I would never become a doctor with my physics grades and I should look at switching my major.  As a result, doubt crept in,” she said. “I started to think that maybe I should start considering alternative careers.”

After she graduated, Eide took a position as a pharmaceutical sales representative for Pfizer – a position she excelled at. She was eventually promoted to a hospital representative, which gave her the opportunity to move to Georgia and visit hospitals such as Emory University in Atlanta.

One day on a visit to Emory, as Eide was walking across the bridge that connects the hospital to the medial arts building, a vision of herself in a white coat walking across that same bridge to see her own patients entered her mind.

“The passion of medicine never left me. As a hospital representative interacting with doctors from all specialties, I wanted to be on the other side making decisions that would benefit my patients. I began to ask myself how and if I could ever be a doctor?” she said.

Still, by that time Eide was married, had a successful career, and was now a mother of three boys. How could she even begin to pursue medicine now, she wondered?

In 2011, Eide’s world was turned upside down when her mother was diagnosed with stage 4 breast cancer. It was a turning point in her life, when Eide started to reevaluate her choices.

“That was the year that I decided I was going to pursue my dream of medicine,” she said. “Life is too short, and if this is what I want to do, I’m going to at least try before giving up on it.”

While working full time and with the support of her husband, Eide started taking night classes at Georgia State to fulfill her prerequisite requirements. Excelling in her courses boosted her confidence. Once finished, she took the MCAT and began applying to US medical schools, only to be told by one that while they liked her application she was “one point away,” so she should retake the MCAT and consider applying again the following year. After four attempts on the MCAT, she was waitlisted at a US medical school.

It was about the same time that another option was mentioned to her by a classmate – Ross University School of Medicine (RUSM). After attending an Information Seminar in Atlanta and having the opportunity to listen to alumna share their experiences and the success of their careers, she was compelled to apply.

“I didn’t want to wait another year for a chance at a US medical school,” she said. “So, I decided to apply to RUSM.”

She was accepted to MERP, which, she noted, was actually a blessing.

“I did well in MERP, which also enhanced my confidence,” she said. “Afterward it was decision time. Should I go to RUSM or wait and see if I got accepted off the waitlist?”

The main reason for Eide’s misgivings was because of her family. She had three children in school, a husbands’ career to consider, and wasn’t sure how going to medical school in the Caribbean would affect them – whether they stayed in the States or came with her.

“At first it was decided that I would move to Dominica and my husband and kids would stay behind, but a conversation with my middle son changed our minds. In the end we decided as a family to move to Dominica,” she said.

According to Eide, the preparatory school that was on the RUSM medical school campus was the saving grace for her family. Her children excelled there, and Mediasite allowed her to attend classes remotely and still give her children the time they needed.

“It was a balancing act, but we made it work,” she said.

When it came time to apply for The MATCH℠ (the National Resident Matching Program®), Eide was of two minds. On the one hand, she was very interested in Physical Medicine and Rehabilitation (PMNR) and planned to pursue a fellowship in either Pain Management or Sports Medicine, but she was also very interested in Family Medicine, which she knew could lead to a fellowship in Sports Medicine or Pain Management as well.

She applied to both, and ended up matching in Family Medicine at Emory University – the very hospital where she had envisioned herself working as a physician all those years ago.

“It’s crazy to think that a vision I had in my mind of me being a doctor walking across that bridge would actually come to fruition,” she said. “God has a plan for why things happen the way they do, and I’m going to be the best Family Medicine doctor I can be.”

When asked how it feels to have come full circle and finally having the letters ‘M.D.’ behind her name, Eide said, “When I think about the full spectrum of being a little girl growing up in the inner city of St. Louis to now I’m a doctor – the adversity I had to overcome to reach this goal speaks of my resiliency, hard work, and determination.  RUSM took these qualities and helped me to become the doctor I always wanted to be - one that is compassionate, knowledgeable, and grounded. I’m grateful for the opportunity RUSM gave me to fulfill my dream and excited about the opportunity to train at an institution that’s grounded in research with such a rich history in Atlanta – I’m proud to be a part of the Emory team.”