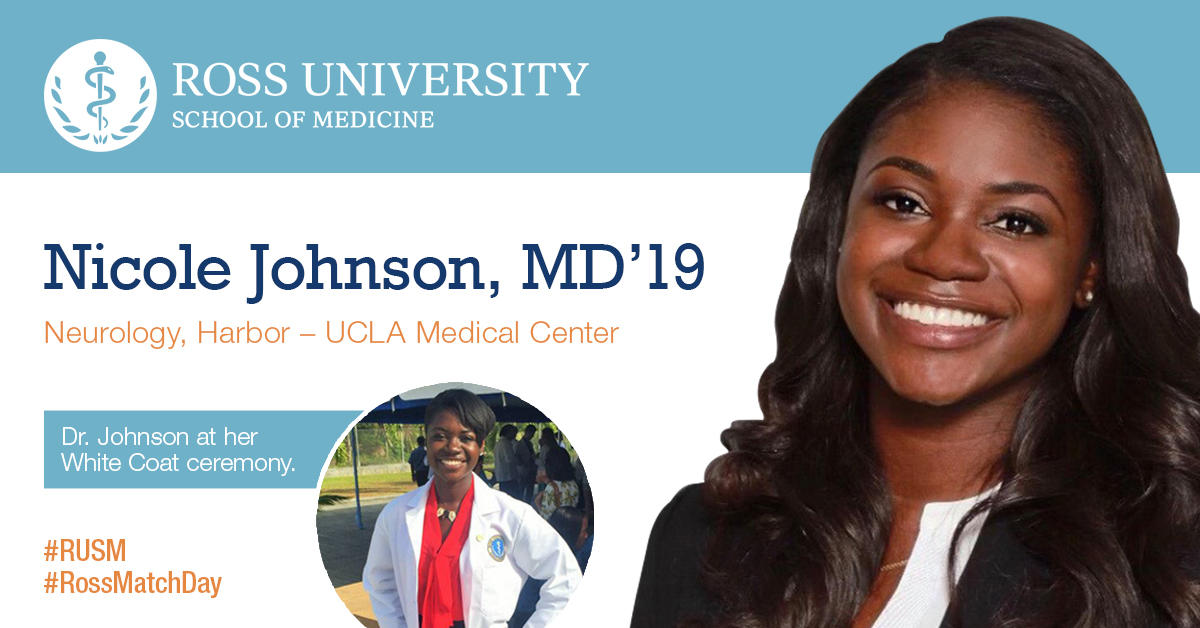 Creating a Path for Others to Follow: One RUSM Alumna’s Journey

When Nicole Johnson, MD ’19, was eight years old, she was given a school assignment to read Gifted Hands: The Ben Carson Story, an autobiography that details Dr. Carson’s inspiring journey from growing up in inner-city Detroit to becoming the director of pediatric neurosurgery at Johns Hopkins Hospital. As an African American child growing up in the Bronx, NY, the book resonated with Johnson on many different levels.

Further inspiration came from her family. Johnson’s older brother, with whom she is very close, was born withGoldenhar syndrome, a rare congenital condition characterized by abnormal development of the eye, ear, and spine.

“I’ve been looking out for him since we were kids,” she said. “I remember looking up different things to make sure I understood what the doctors were talking about. I kept a journal and documented everything.”

Johnson doggedly held on to her dream throughout high school, and when the time came for her to go to Utica College, she took the premed route, choosing to major in Biology and minor in Chemistry.

Biology gave her some trouble, however, and she almost changed majors in her junior year.

“I spoke with one of my professors because I wasn’t doing that great, which was affecting my GPA. ‘You're capable of doing the work. I think you need to correct the way that you’re studying and try again next semester,’” he said. “So, the following semester I started studying in groups and that really helped out. My GPA went up, but not quite high enough to get into [U.S.] medical schools.”

Johnson heard about Ross University School of Medicine (RUSM) from two of her college professors.

“They told me about [Dominica] and how you go for just two years and then come back to the US and do clinicals, and I was like, I can do that,” she said. “It gave me a chance to do what I really wanted to do. I still had the chance to pursue my dream, so Ross was a big opportunity for me.”

She continued, "My journey through medical school was anything but flawless. I had a few obstacles along the way, but Ross provided me with guidance and the opportunity to do well. A huge part of my journey at Ross was learning how to be proud of minor accomplishments and how to manage my failures with grace."

Johnson’s interest in Neurology blossomed at RUSM, and she eventually was chosen to be a teaching assistant (TA) in the Department.

“I was grateful for that position,” she said. “It taught me a lot of responsibility and solidified my love for Neurology. Teaching it and being able to understand it was the initial spark. I got to be the head TA the next semester, and that was awesome. It was something I could be proud of.”

When asked what drew her to Neurology specifically, Johnson replied, “The brain is such a complex, irreplaceable organ. I’m a very deep thinker, and finding out that there are so many different pathways that merge to form one response, movement, or thought – being able to bring it all together and understand it was the highlight for me.”

Fast forward to just a few weeks ago, when Johnson was anxiously waiting for news of her ©MATCH℠ (the National Resident Matching Program®) results with her mother.

“My number one pick was Harbor – UCLA Medical Center, but at my interview they told me they were only taking three people, so in my head I was already going to my number two pick,” she said. “When I got the email that I got into UCLA I was in total shock. I must have said, ‘What?’ at least 10 times and just kept reading the email over and over. I feel very grateful to everyone for it.”

Johnson noted that she is very much looking forward to expanding her knowledge at UCLA.

“There is so much about Neurology that I don’t know, so there is so much opportunity to learn new things. I’m looking forward to that and getting to know everybody and interacting with my attendings,” she said. “Our intern year incorporates so many different specialties – not just Internal Medicine – we get to do surgical specialties and we also train within Neurology in our first year. I’ll get exposure early on, and that was super important for me.”

As she reflects on how far she has come, Johnson noted that she’s very much aware of the growth she has experienced within herself during her medical school journey.

“I’ve grown a lot since I started,” she said. “I’ve gotten better with being able to ask for help and not trying to do everything on my own. I’ve also taken on a lot of responsibility – even the way I think about things, I try to be more open and I think that’s essential to being a physician. I’ve become a better listener, so I feel I’ve grown quite a bit and hopefully that helps me throughout my career.”

The consummate planner, Johnson is already looking ahead to where she wants to go.

“My goal is to do Endovascular Surgical Neuroradiology, which is a fellowship that will allow me to incorporate more vascular procedures into my practice. And then sometime during residency, or maybe later in my career, I want to do outreach to inner-city schools. I personally didn’t have much exposure to medicine growing up, so I’m hoping I can talk to juniors and seniors in high school and encourage them to consider the possibility of doing medicine. African Americans only make up about five percent of all physicians in the United States, and to me that’s a huge deficit, so I hope my story encourages them to fight their circumstances and any obstacles and know that their dreams can come true, too.”