Dr. Kevin Green Aims to Boost Social Equality and Change the Narrative Before He Has Kids of His Own

Don’t wear a hood. Get home before dark. Always keep your hands visible. Avoid arguing. Don’t ask too many questions. Stay quiet and listen. Be respectful despite what’s said to you. Don’t respond to condescending comments. Disregard the looks and passing judgments. These are just a handful of the unwritten rules that Ross University School of Medicine alum Kevin Green, MD, heard from his mother during childhood. 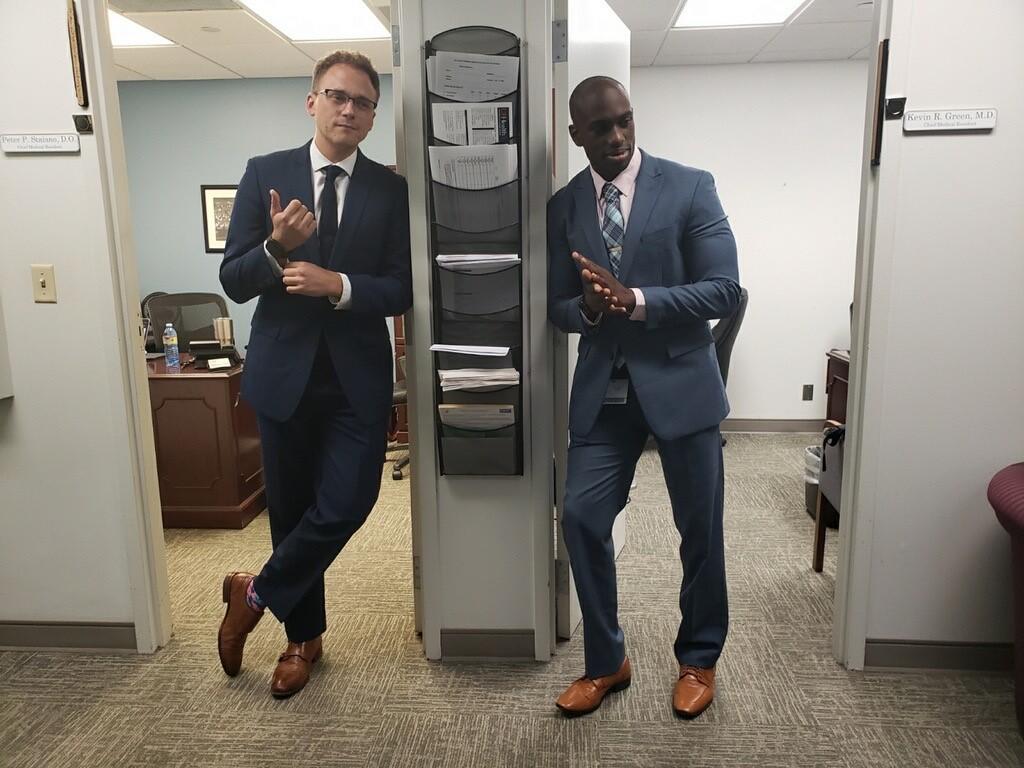 “This is the type of thing I had to deal with my whole life. My mom always told me that unfortunately, I won't have the same opportunities and won’t be given a second chance like others. As a kid, I was upset but she explained that I’d be singled out and suffer the stiffest penalties.” Kevin shared a story in which he and his Caucasian roommate were pulled over in his own driveway. “We didn’t travel far so I knew I didn’t speed or go through any red lights. I was sitting and being patient so nothing escalated. When I asked why I was getting stopped, the police said because there had been a reported robbery in my neighborhood and that I matched the description of the suspect. I was angry because he couldn’t see anything when he pulled me over except the color of my skin.” While the police were still on the scene, the roommates sat in awkward silence until Kevin spoke up. “That’s what’s called DWB — driving while black.”

While these experiences may seem harsh to some, they’ve become so routine to Kevin that it’s almost unnoticeable. He remembers being called derogatory terms such as “monkey,” having a patient refuse his services and suspicious glances when he offered his medical services because he was dressed in plain clothes instead of a three-piece suit. “It’s tough because you always have to live your life this way. When the Ahmaud Arbery shooting happened, I started reflecting on my life. My mom said she didn’t want me running outside too late. I’m into fitness and I am a six-foot, muscular Black man. I thought who will mess with me while running? But then I realized why parents say the things they do — it’s to protect us. It’s unfortunate that I could do something so simple and lose my life for it. It’s so disheartening.”

A big fan of science and mathematics, Kevin was naturally drawn to medicine. He was also enticed after shadowing a doctor, participating in a minority healthcare program and hearing his mom’s nursing stories. But the final lure was feeling helpless after a cousin suffered serious injuries due to a car accident. “I couldn’t do anything. I watched the doctors helping and I realized right there — this is what I want to do. I want to make a difference because I want to be able to help everyone around me.”

Healing Those in Need

Though he was initially interested in gastroenterology, Kevin changed his specialty after exposure to the intensive care unit (ICU). “I loved the pace of the ICU. In the critical-care world, the ICU is like medicine on steroids.” He is now a pulmonary and critical care fellow at a medical facility in Jacksonville, Florida, caring for underprivileged patients who have restricted access to healthcare. “I feel at home. I feel comfortable because diversity is all around me — all races and all creeds. And I knew I could make an immediate impact.”

Now Kevin is paying it forward, serving as a strong role model for Black physicians, students at RUSM and youth in the community. “There are a lot of people who are unaware of what we have to go through. I want to be a leader and help them. The biggest exposure of Black men in the media are sports figures, rappers and other celebrities. I want to show other areas of success. That’s the great thing about being a physician. You encounter patients from all different parts of the world and have a chance to lead by example — show them that a Black man can be just as successful as any other race, that we shouldn’t be judged by our race or our creed but by what we do when we care for others.”

Applauding those who are now proactive in the fight against racial injustice, Kevin said it’s a step in the right direction. “We’re having those uncomfortable conversations and we’re starting to engage in real dialog about how to make it better,” he said, praising RUSM for taking steps to dismantle racial inequality. “Over time, the percentage of division will lessen. For a lot of African Americans, it is what it is. Things have been stagnant for so many years and now we’re in the search to be considered equals. This is an interesting climate. Some believe if you’re not out protesting or being vocal in the streets, then you’re wrong. But you may be offering messages in a hospital where you exemplify your strengths; that may be the venue for you. Just because you’re more outspoken or more political or more versed, doesn’t mean you’re the only one who can help lead a movement. Everyone plays a part so we shouldn’t be rushing to judgment.”

Kevin encourages his colleagues and friends to band together and support others, providing resources and serving at shelters. “You have to give hope. The youth don’t know who to reach out to or how to do it. They may be scared. We need to reach out and let them know we’re here and we’re in this together. Having awareness and showing your character speaks volumes about who you are regardless of race.”

Growing up in New York, Kevin spent summers in Jamaica, where his parents originated. “Traveling there one to two times a year has been a real motivating force in me — shaping the way I look at things. A lot of people there aren’t afforded the same opportunities I have here.” Kevin, his mom and his sister now reside in Florida and his brother lives in a diverse community in Atlanta. “Regardless of where you live, it’s nice to be part of a community in which you feel welcome.”

The adrenaline-seeking enthusiast who loves driving motorcycles, scuba diving and playing sports, remains hopeful. “People are suffering because of the color of their skin. I hope more people will start treating others as human beings who deserve to be treated equally. This inequality isn’t an issue that goes away in one week or one month or even one year from now. We have to continuously work at it and take steps forward to make it everlasting. My hope is that if my kid wants to grow his hair out and have dreads like I did, that he won’t have to worry about how he’s perceived. That he will sit down at a job interview and be reviewed by what he did to get there, not by what he looks like. And that I won’t have to have the same conversations with my kids that my mom had to have with me about being treated differently or being fearful just because they’re Black.”