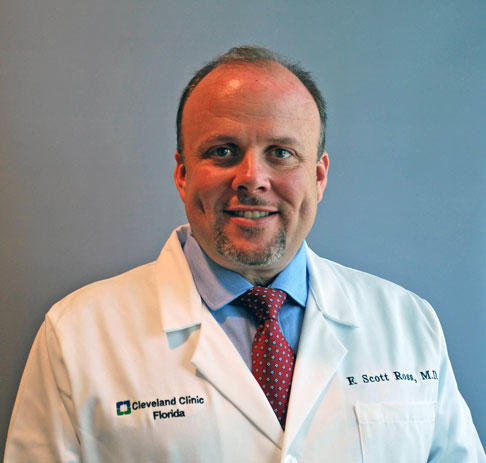 F. Scott Ross, MD ’10 always knew he wanted to study medicine. He initially applied to medical school after graduating from the College of Charleston in 1992 with a BS Biology degree.

He was waitlisted by his instate public medical schools. His mother had passed away from colon cancer at the age of 42 that same year. In retrospect, he feels that perhaps he came across during his admission interviews as wanting to pursue medicine for all the wrong reasons. He would go on to accept a job with South Carolina Electric and Gas Company and eventually be named Manager of Residential Sales for the entire state of South Carolina.

In 2006, during a mission trip to Trinidad, he would be reminded of his lifelong dream of becoming a physician. Initially intrigued by the name alone, he applied to Ross University School of Medicine and ultimately embarked on a medical school journey with his entire family. He graduated in 2010 and matched into his first choice of residency programs, Cleveland Clinic Florida Internal Medicine. He served as Chief Resident during his PGY3 year. He graduated from residency and became board certified with the American Board of Internal Medicine in 2013. He stayed on as a staff physician at Cleveland Clinic Florida and currently serves as Chair of the Department of Hospital Medicine and Clerkship Director for the 4th Year Internal Medicine Sub-I elective rotation.