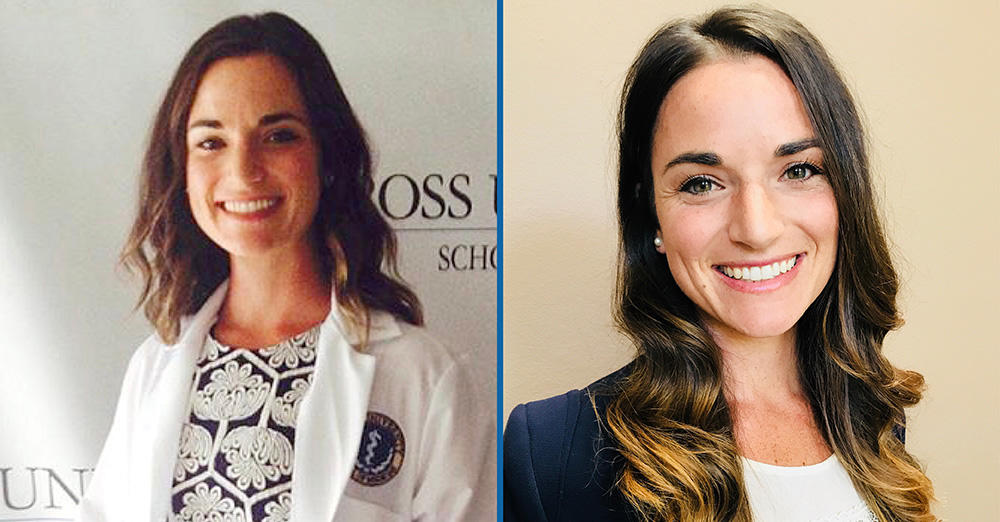 FOR ONE RUSM ALUMNA, BECOMING A DOCTOR IS AKIN TO BEING A SUPER HERO

Raised in a family of healthcare professionals, Keena Kohl, MD ’19, has wanted to be a physician for as long as she can remember.

“My grandfather and both of his brothers were physicians and my mom is a nurse,” she said. “It seemed that every family gathering turned into an informal clinic, so at a very young age I saw the sense of relief that someone with a medical background could provide to someone [else who] didn’t know what was happening to their body. That seemed like a superpower to me, and I wanted that superpower.”

She entered college with the intention of going to medical school afterward, but ended up majoring in History after being told that undergraduate school was the optimal time to explore avenues of a non-scientific nature. Doing so also allowed her to run cross-country, but led to her graduating without finishing her pre-requisites for medical school. So, she moved back home and took a job as an operating room assistant in an orthopedic hospital. While she was there, she developed a rapport with the anesthesiologists who took her under their wing.

“I’d never had any experience with anesthesia or knew anything about anesthesia besides what anyone else would know – that an anesthesiologist puts you to sleep,” she said. “But once they found out I wanted to go to medical school they took the time to teach me and would take me to different hospitals [for cases]. My first surgery that I ever sat in on was an open heart case – it was a nine hour case and they walked me through the whole thing and I was standing at the head of the bed the whole time just fascinated.”

Kohl learned about Ross University School of Medicine (RUSM) while at the hospital from some of the doctors who worked there. Having been waitlisted from U.S. medical schools, she decided to apply.

“RUSM is such a unique experience. Unless you’ve done it, you don’t know what it’s like to leave your family and everything you know behind to go study medicine on an island. So when you’re there, you make friends in such a family oriented way because everyone is in the same boat and that experience bonds you in such a unique way and when you go back to the States you carry that same sense of community wherever you go,” she said. “I’m very proud to be a part of that community and I definitely won’t be shy about saying I went to Ross University [School of Medicine] because I think it’s a special place.”

Kohl entered RUSM with the hope of specializing in Anesthesiology; however, she recognized the importance of keeping her options open.

“I knew it was competitive, so it was always in the back of my head but until I took [the United States Medical Licensing Exam®] Step 1 I didn’t want to set my heart on it,” she said. “In third year, I was waiting for that feeling of falling in love with a specialty and hadn’t had it yet and then trauma surgery [at Atlanta Medical Center] changed my life. It has the reputation of being the most intense rotation so I was really scared of that rotation and it ended up being my favorite. It was the hardest I worked, it was the most sleep deprived I’ve been, but I loved it [because] I really felt part of a team. And the reason I chose anesthesia specifically was because my favorite part about trauma was stabilizing patients and I found that anesthesiologists are the masters of stabilization. So, all roads kept coming back to anesthesiology.”

For Kohl, learning that she had matched in her specialty of choice at Rush University Medical Center in Chicago was an amazing experience; however, she noted that learning where her friends had matched was almost more enjoyable.

“Match day is exciting for you, but it was so exciting to hear when your friends match at the programs they wanted to match in, so I was almost more excited to hear about them. Everyone matched at such great places and it was so great to have gone through this together,” she said.

Kohl noted that she will begin residency with a renewed sense of confidence in herself, which she credits to her time at RUSM.

“The biggest difference is that I’m just more confident in myself overall,” she said. “Going into medical school, I had a chip on my shoulder for sure, and that chip made me do well at RUSM because I was like, I’m going to prove all those people wrong [and show] that I can do this. And now, being on the other side and doing well and having matched at a good place, I’m just confident in myself, and I think that’s the best way to go into [residency]. I don’t know everything, but I’ve been at a point where I didn’t know everything before and I figured out a way to learn it, and residency is going to be the same way. I know it’s going to be hard, but I also know that I can do it.”