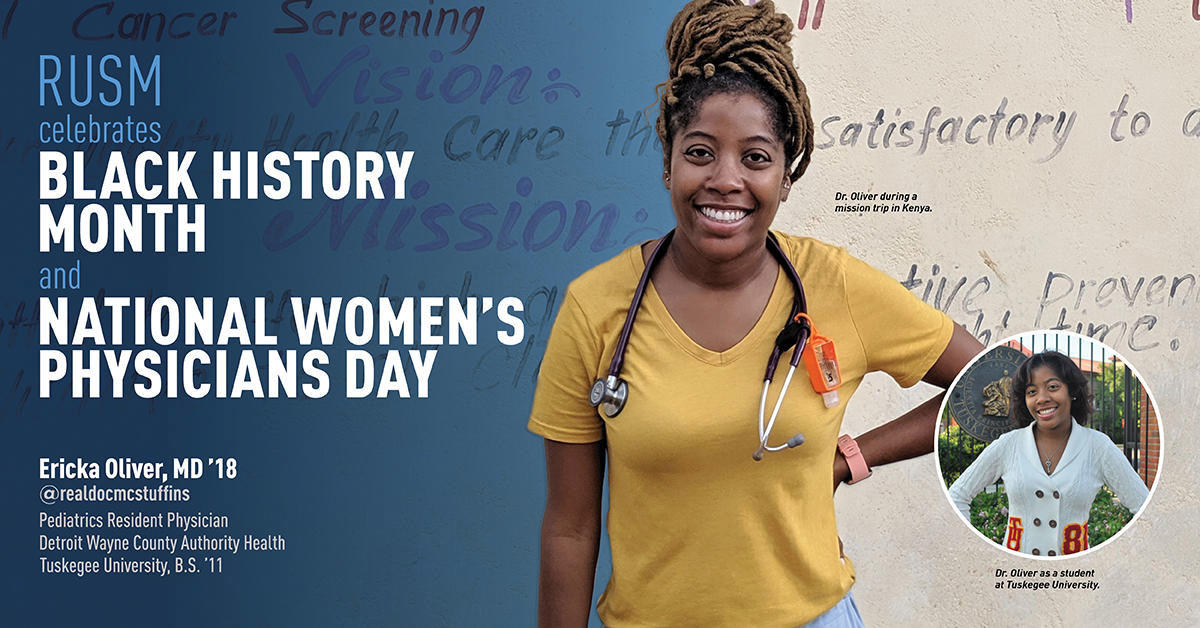 For One RUSM Alumna, Being a Pediatrician Is a Dream Come True, And So Much More

A senior pediatric resident in Detroit, MI, Ericka Oliver, MD ’18, is thrilled to be in a position where she can be an example for, and mentor to, young girls who have dreams of becoming physicians – just as she had as a child.

Oliver has wanted to be a physician for as long as she can remember. Her grandmother, with whom she shared a very special bond, was ill when she was growing up, and Oliver vividly remembers accompanying her to various doctor’s appointments and being fascinated by everything she saw there.

“From the time I was a toddler, I had an interest in medicine,” she said. “I was a candy striper at a hospital in middle school, and all through high school I was in a health occupations track [which] exposed me to all different areas of medicine, so I’ve always been very focused on going into medicine.”

After receiving her bachelor’s degree from Tuskegee University and her master’s from the University of South Florida, Oliver began applying to medical schools in the United States. Like many Ross University School of Medicine (RUSM) students, Oliver was a strong student who struggled with standardized tests. After taking the Medical College Admission Test® (MCAT) three times, she decided to look into alternate options. While researching Caribbean medical schools, she learned that RUSM was holding an Information Seminar close to her home in Atlanta. She decided to attend, and after hearing firsthand about other alumni’s experiences, decided to apply.

“My experience at RUSM was amazing,” she said. “On my way, I had a layover in Puerto Rico and [met] a girl who was also starting at RUSM and we became inseparable. First semester, that was hard, but I had a lot of support education-wise, so that was good. If I had known about RUSM while I was at Tuskegee, I would have applied no questions asked because I definitely believe it’s the same level of education [as U.S. medical schools].”

“I’m really happy about RUSM’s partnership,” she said. “Knowing what all of our options are as far as going into medicine is really good. There aren’t a lot of black physicians, we could definitely use more, so I think the partnership is great. I’m looking forward to seeing how it works and what the outcomes are. Ross University [School of Medicine] was no doubt the best place for me to attend medical school.”

She noted that her residency location – Detroit Wayne County Authority Health – is located in an area where she would like to see more black physicians, which is one of the reasons it was her first-choice National Resident Matching Program® (The MATCH℠) pick.

“One of the reasons I came to Detroit was so these little ones can see someone who looks like them,” she said. “As a physician, I want to stay very involved in the community and promote children going into medicine, especially minorities. I’ve always had a mentor mindset and been open to talking about my journey. I like to give encouragement and let people know that it’s not necessarily going to be easy, but you have to keep going.”

As Oliver goes into her second year of her three-year pediatric residency, she recalls her nerve-wracking first day as being a real eye-opener.

“It was like, oh my god, I don’t know anything – which is what you think in the beginning – but once you’re in and they’re asking you questions, you find that you know a lot more than you thought. It’s been a great experience,” she said.

After residency, Oliver has her sights set on a neonatology fellowship, which is something she has been working toward since spending a month in the NICU at Cook County Hospital in Chicago during her clinicals.

“I absolutely fell in love with these little baby warrior ninjas. So much can happen with them and the physics behind what’s going on. And you get continuity with these babies because usually they’re with you for a while,” she explained. “Once all my training is done, I would like to move back down south closer to my family, hopefully have a family of my own, practice in an urban area and continue to focus on advocacy work.”

When asked why she chose pediatrics, Oliver noted that for her, there was no other specialty that even came close.

“I was either going to be a doctor or a daycare owner,” she said. “The resilience of the children, the fact that they are moldable so even if they’re going down the wrong path you can push them on the right path, and [the fact that] in most cases parents will do what is best for their child were all factors. You go into a room with a child and they’re running around playing and not even caring that they’re doing chemotherapy or something, which just makes going to work every day even better – kids are just awesome.”

Forever grateful for being given the chance to pursue her dream, Oliver said that to her, RUSM is “everything.”

“Really everything. I would not be where I am right now if it wasn’t for RUSM. A physician – a pediatrician – is something I’ve always wanted to be and if RUSM didn’t come along I still would be chasing the dream, but who knows when I would have gotten to it?” she said.

“They gave me a chance, they helped me through the process, and now I’m a great physician. So yes, RUSM means a lot to me.”