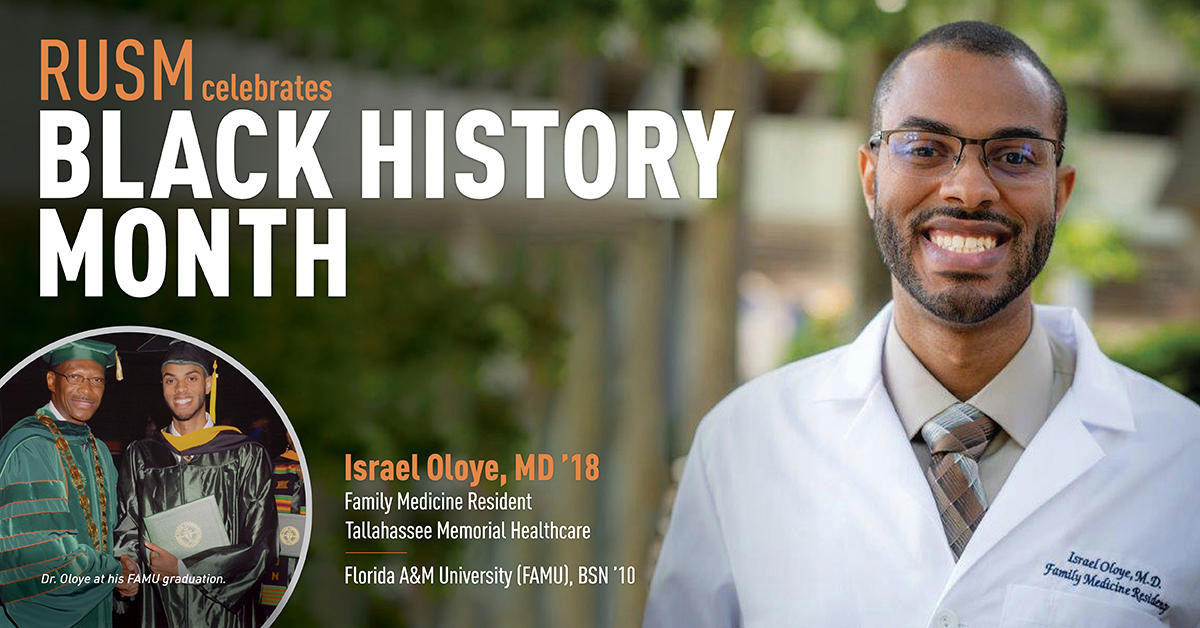 For One RUSM Alumnus, Being a “Nontraditional” Student Took Him Exactly Where He Wanted to Go

Ross University School of Medicine alumnus Israel Oloye, MD ’18, always knew he wanted to be a physician; however, he opted to follow a somewhat nontraditional route by becoming a nurse first.

For Oloye, obtaining a bachelor’s degree in Nursing at Florida Agricultural and Mechanical University (FAMU) was a “practical step” toward medical school.

“I wanted to get practical experience in medicine and thought if I majored in Nursing and got a taste for medicine first-hand, I could see if pursuing a MD would be something I was interested in. It turns out it was, and I’m happy to be here,” he said.

By “here,” Oloye is referring to Tallahassee Memorial HealthCare, where he is poised to start his second year of residency in Family Medicine (FM).

“Tallahassee was my first choice,” he said. “In my heart of hearts, I knew I was going to match here. I had a good relationship with the hospital and knew the staff [and] the community. But finding out gave me a sense of satisfaction and affirmation. You put a lot of time and effort into something and one email puts it all together and gives you a real sense of accomplishment.”

Oloye spent three years as a nurse before starting medical school, and actually found out about RUSM from one of the physicians he worked with who had also gone the nursing route before earning her MD. Encouraged by his colleague’s story, Oloye decided to start an application, but got busy and wasn’t able to complete it right away. But then a RUSM admission associate provided him with the encouragement he needed to finish his application so he could be considered for admission.

“I was thinking to myself that I could do, offer, and learn more, but I was also comfortable where I was,” he said. “RUSM gave me a little push by calling to remind me to finish my application, and I got motivated by that call to follow through.”

Like many RUSM students, it took Oloye a bit of time to adjust to life as a medical student on a Caribbean island, but once he did, his described his experience as “very positive.”
“Going to the Center for Teaching and Learning was a big help [and] a great resource. Being within a diverse student body [with] all the clubs [and] the activities that we were involved in was great, and being able to go through those last years and travel and see everything that I saw was really inspiring,” he said.

In his last two years as a medical student, Oloye was able to experience several other countries’ healthcare systems firsthand by doing rotations in both the United Kingdom and Dominican Republic. Those opportunities, as well as being able to participate in patient care in Dominica, helped shape him as a doctor.

“You see patients from all walks of life in medicine, and going to RUSM helped prepare me for all the things I’ll see in my lifetime,” he said. “My time on the island was especially humbling because you see that a lot of the things we have here in the U.S. are not so readily available in other places. It’s good to get perspective and understand that the approach to medicine is not universal and not everyone has the same resources at their disposal, so you learn to make due with what you have.”

In fact, adaptability is one of the most important lessons he learned at RUSM, and is something that will help him be successful as the Family Medicine physician he is today, and the hospitalist or Urgent Care physician he hopes to be in the future.
“One thing you get from going to RUSM and being in a whole other environment is adaptability,” he said. “Coming from the U.S. and being used to a certain way of doing things and then going to a whole other country – a whole other lifestyle – you learn to adapt. And that’s something I’ll carry with me for the rest of my life.”
For Oloye, going into his senior year of residency is somewhat reminiscent of going into his first.

“The highlights of residency are learning and transitioning to become the physician you are hoping to be,” he explained. “It’s kind of overwhelming at first. Going from medical school to residency can be quite a transition. Day one, [taking] it all in and realizing you have come so far and this is the beginning of the rest of your life, is pretty surreal. And then at the end of intern year, it’s a repeat sensation all over again knowing that you need to start taking on the new interns and teaching them. I am looking forward to it because in the act of teaching you learn more about yourself, so there’s the opportunity for growth.”

As both a RUSM and FAMU alumnus, Oloye understands the challenges that medical school hopefuls can sometimes face, which is why he is particularly excited about RUSM’s new pathway program with FAMU to increase physician diversity.

“The partnership is fantastic,” he said. “I really wish they had this program going when I was an undergrad. Anyone who is at a HBCU/HSI, if they have even the slightest interest in going to medical school, it’s highly recommended. RUSM is an opportunity, first and foremost. You have everything you need to be successful, and with that you’ll be able to make use of the tools that are offered and become who you want to be.”

When asked what kind of physician he is working to be, Oloye responded, “Well versed. Of course, happy. And having a very compassionate, holistic approach to patient care. Being a community resource. And just making sure you do right by the people you serve in the community.”

After graduating from Florida Agricultural and Mechanical University (FAMU) with a bachelor’s degree in Nursing, Israel Oloye, MD ‘18, was inspired to apply to Ross University School of Medicine (RUSM) so that he could do, offer, and learn more.

After graduating with his medical degree from RUSM in 2018, Oloye began a Family Medicine residency at his first choice program at Tallahassee Memorial HealthCare, where he is poised to begin his senior year and begin teaching first-year residents. He is looking forward to his new role as a mentor, and hopes to continue to grow into the physician he hopes to be – one who is compassionate and who does right by both his patients, and his community. Oloye considers lifelong learning to be of paramount importance, and in the future would like to continue his education as a Hospitalist fellow or Urgent Care physician.