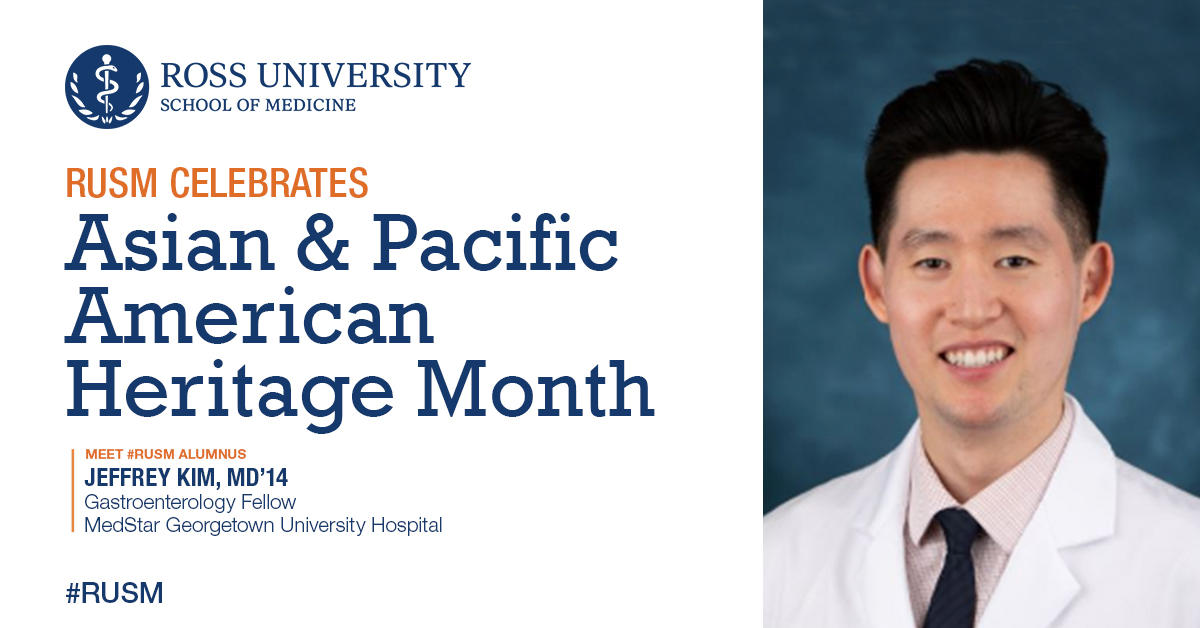 From Maryland and Back Again: An Alumnus’ Journey Comes Full Circle

While no two international medical student’s journeys are alike, at some point along the way, each will wonder how the path before them will unfold, and ultimately, conclude. For one Ross University School of Medicine alumnus, the journey brought him right where he wanted to be – geographically, professionally, and personally.

The son of a well-respected gastroenterologist in Maryland, Jeffrey Kim, MD ’14, became inspired to become a physician in high school after going on several medical mission trips to places such as Peru and Mexico. Growing up in a medical household, he knew that the need he had witnessed abroad for expert medical care was something that was lacking in certain areas of the United States as well, and became determined to help meet it.

After graduating from the University of Maryland with a degree in Biology, Kim began applying to US allopathic schools. After being waitlisted, he spent a year doing clinical research at Maryland Digestive Disease Research Center.

“That’s where I started not just liking medicine, but gastroenterology specifically,” he explained.

Kim found out about Ross University School of Medicine (RUSM) from one of his father’s physician colleagues, whose son was a student there.

“I ended up talking to him and he told me that he was currently rotating at various  hospitals in Maryland, and I started thinking how nice that would be – to go abroad for 16 months and then come back home to complete my clinical rotations.”

Soon after, Kim learned that a doctor that he knew from his church was also a RUSM graduate. More than a little intrigued, Kim decided to look into RUSM for himself and, liking what he learned, went ahead and completed an application.

“It seemed like a great opportunity, and I could start right away, which was very appealing,” he said. “I didn’t want to risk waiting another extra year to begin my training. By the time I was done with the basic sciences program and on my way back home, I’d probably just be hearing back or starting school in the States.”

So, after talking things over with his father, Kim made the decision to go to RUSM.

“RUSM was the only Caribbean school I applied to,” he said. “After hearing positive experiences from two people around me who were already, or on their way to being, doctors – that was pretty much all I needed to know.”

From start to finish, Kim’s experience at RUSM was very positive, especially from a logistical perspective.

“What I’d hoped would happen as far as my clinical rotations were concerned is exactly what ended up happening,” he said. “After my fourth semester, I commuted to hospitals from my home for all but six weeks – and those just happened to be in Miami during the summer, so that was pretty awesome.  I was away for 16 months but at home for two and a half years with my friends and family.”

When it came time to apply for The MATCH℠ (the National Resident Matching Program®), Kim applied to Internal Medicine knowing that he wanted to go on to do a Gastroenterology fellowship. After scoring well on the USMLE, he ended up interviewing at several well-known university hospitals on the East Coast, but had his sights set on Drexel University College of Medicine, where he ended up matching.

“It was awesome to be able to have these choices,” he said. “I felt that the whole match process was set up pretty nicely and that I had good options. To be able to match in your first choice in an awesome city was such an amazing opportunity.”

After completing his IM residency, Kim applied for, and was accepted to, a Gastroenterology fellowship at Georgetown University Hospital, where he is about to start his third and final year.

“It feels great to be following in my dad’s footsteps,” he said. “My path was a little different then the traditional route, but my dad always says I’m actually doing better than him and he is very happy for me.”

According to Kim, there was one key aspect to going to medical school abroad that he believes was very beneficial.

“You get to see and experience first-hand how medicine is practiced in different health systems and you’re exposed to a high level of diversity, both at the school and at the hospitals you rotate at,” he said. “It translates well into real-world practice where the patients we treat also are very culturally diverse.  I believe that this experience has made me a more complete physician.”

Looking back on his medical school experience and where he is now, Kim noted that he has mixed emotions.

“I finally proved to myself what I knew I could do all long, despite a few setbacks earlier on in my career,” he said. “RUSM to me means hope and an opportunity to pursue your dream.  I’m grateful for the opportunity that I had, and when I think about other prospective students who have reached out to me for advice, I am very humbled and excited for their futures. Honestly, I am just your average person who stayed positive and worked hard. If I can do this, there’s no reason why anyone else can’t also fulfill their dreams at Ross if they stay positive and committed to the journey.”