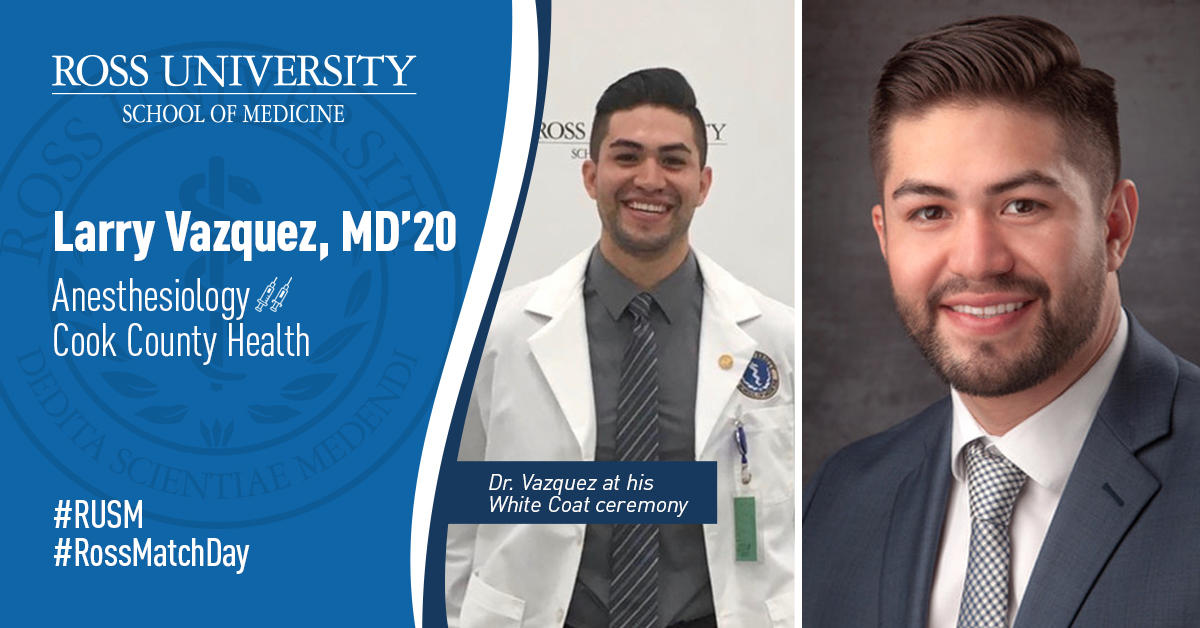 When Larry Vazquez, MD ’20, was growing up, heath concerns impacted his very close family to such a significant degree that he was motivated to become a physician. First, his older sister was diagnosed with epilepsy when Vazquez was 13, and just a few years later, his grandmother suffered a stroke.

As a result, Vazquez found himself going to a lot of doctor appointments where he helped his family understand the more scientific aspects of their prescribed care, and often acted as their translator. His interest sparked, Vazquez initially pursued Physical Therapy in college; however, he quickly realized that while the care physical therapists provided was impactful, they weren’t the ‘leader’ of their patients’ care – which is ultimately what Vazquez wanted to be.

As he switched his focus, Vazquez realized he needed to go to medical school, so he started discussing options with his family. As chance would have it, his sister had a friend who was going to Ross University School of Medicine (RUSM). At her suggestion, he reached out to learn more about her experience and, liking what he heard, decided to apply.

“I did a lot of my schooling really close to home and wanted to be more independent, and Ross offered that, as well as the chance to follow my dream,” he said. “I didn’t apply to any other medical schools – only Ross.”

Sadly, only two weeks prior to the start of his first semester, Vazquez’s sister passed away.

“It was a really difficult time and I was actually on the fence about going, but my mom sat me down and said that now there was an even bigger reason for going – that I had to go for the whole family and for her – so I went and they supported me every step of the way,” he said.

Adjusting to life in Dominica turned out to be an exciting adventure for Vazquez that provided him with the independence he had been seeking.

“I got to live on my own for the first time, and even things like going to the grocery store were exciting,” he said. “The thing I most regret is that I didn’t enjoy the island as much as I should have, but I wanted to do really well in medical school. I knew I couldn’t waste the opportunity.”

Vazquez’s strong academic performance helped make him a competitive ©MATCH (the National Resident Matching Program) contender in his specialty of choice – Anesthesia – and he ultimately matched at Cook County Health in Chicago.

“I am so excited to finally begin residency and start my training as an anesthesiologist. Medical students work so hard to finally see those words, ‘Congratulations, you have matched!’” he said. “It is such a surreal experience and very rewarding. I am so thankful for RUSM for giving me the opportunity to become a physician. I am also thankful for my family and partner for supporting me along the way. I could not have done it without them.”

When asked why he choose to specialize in Anesthesia, Vazquez explained that his first surgery in his surgery clerkship was a trauma case led by a neurosurgeon. The patient was in his twenties and the surgery, which was only expected to last three hours, ended up taking 12. Right at the end, the patient went into cardiac arrest and neither the neurosurgeon nor the nurse anesthetist knew what to do. In the end, the anesthesiologist was called in and was the one who handled the code and successfully resuscitated the patient. Vazquez was duly impressed.

“When I think of a doctor, I think it’s really important to be the person who can handle a case in that type of high-acuity setting,” he said. “You want someone who is able to stay calm and manage a patient when they most need it, which is what I saw in Anesthesia and why I picked it.”

He went on to explain that Anesthesia also offers a lot of opportunities down the road, should he choose to specialize.

“I’m not sure that a lot of people even know this, but you can do critical care anesthesiology where you get to do a lot of procedures and be really hands-on,” he said. “Specializing in critical care would offer the opportunity to follow patients and provide continuity of care in a hospital setting, which I would love.”

As Vazquez looks toward the start of his medical career, he is also trying to take some time to reflect on how far he has already come.

“I’m never complacent, so I have to take time and remind myself to be proud,” he explained. “I’ve been on the go ever since starting medical school and now, talking with my parents, they tell me that I need to stop and recognize my accomplishments. So, I’m trying to use this time to be proud, but mostly I’m just excited to start residency and be that person who actually manages patient care – I think that’s amazing.”

He continued, “Ross has given me an opportunity to accomplish my career goals. Now on the brink of starting residency, I really want to one day be in a position to help other IMGs [International Medical Graduates] get into the more competitive residencies, such as Anesthesiology.”

His advice for anyone considering medical school is to make amazing connections and enjoy the experience.

“If medicine is the only thing you want in life, then Ross will for sure give you that,” he said. “Focus on doing well in your classes and boards, but also take time to enjoy the whole experience. Enjoy the struggle – you’ll never experience anything else like it,” he said.