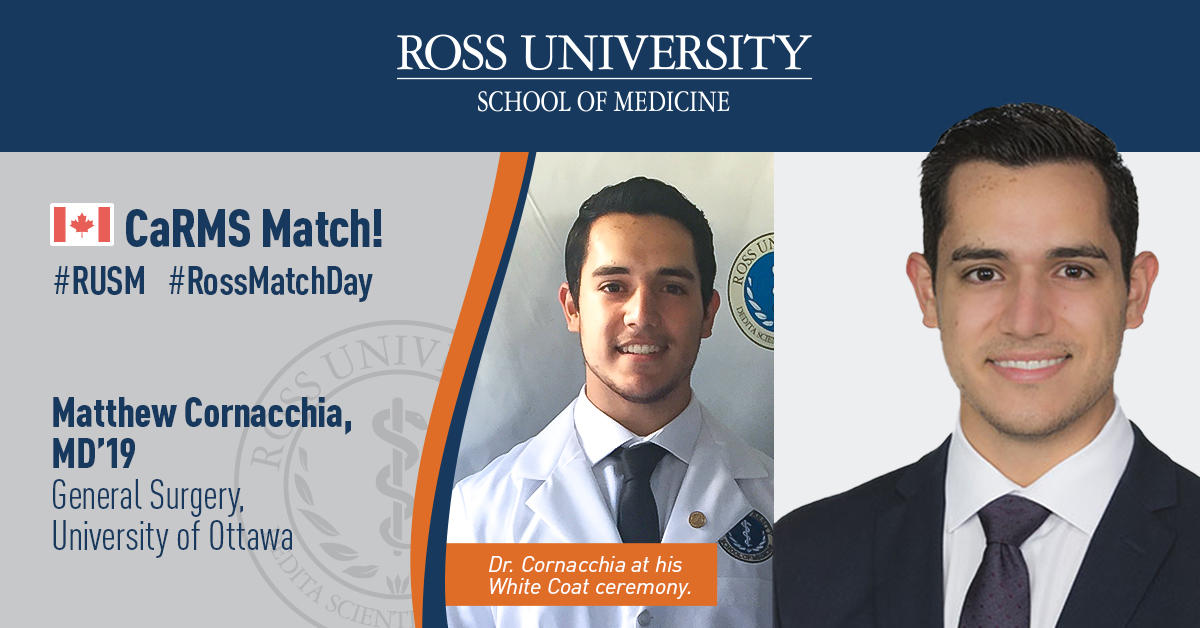 Headed to: General Surgery, The University of Ottawa

A medical mission trip to Costa Rica and Nicaragua during Matthew Cornacchia’s, MD ’19, fourth year at York University in Toronto inspired his decision to become a physician.

“Becoming a physician wasn’t something I knew I wanted to do early on,” he said. “I was in my senior year at university and started looking into what I wanted to do career-wise, and I knew I wanted a career that would allow me to help people as much as possible, but I wasn’t completely sure what that was yet.”

While on the mission trip, Cornacchia assisted doctors who were serving in underserved communities and got to see firsthand the impact they had on their patients.

“I was a biology major and I really enjoyed my courses in human biology, so I had started thinking about becoming a doctor, but working with the physicians on the trip was really what secured my decision,” he explained.

Having made the decision to become a physician so late in his undergraduate career, Cornacchia knew that it would be difficult for him to get into a Canadian or U.S. medical school on his first try.

“Getting into medical school in Canada is competitive at any time, and I was just real with myself,” he said. “Pursuing medicine was something I discovered late, and I knew I had some catching up to do.”

Rather than wait, Cornacchia decided to look into alternative options and happened to run into an old friend who had just been accepted to Ross University School of Medicine (RUSM).

“I didn’t even know Caribbean medical schools existed until then,” he said.

Intrigued, he decided to look not only into RUSM, but at other Caribbean schools as well, in addition to medical schools in Australia and Ireland.

“I looked at all my options and what attracted me to Ross was their high Step 1 pass scores and ©MATCH [the National Resident Matching Program] rate. They also took quite a few Canadians who were doing well in the MATCH, so that intrigued me, and then also I saw that students had the opportunity to do community service in Dominica, which was something I wanted to continue doing. So, I ultimately applied and was accepted.”

Cornacchia had a great experience at RUSM, making new lifelong friendships, immersing himself in a different culture, and making a difference in the local villages through health fairs held by the Surgery Interest Group, of which he was a member.

“It was such a big change, and I was surprised that I was a lot more adaptable and durable than I had expected,” he said.

Cornacchia chose to pursue a career in Surgery after his third-year surgery rotation at Norwalk Hospital in Connecticut.

“I really wanted to have a career that was more hands-on and not just treating the simple things,” he said. “I wanted something that was going to challenge me and I really liked the idea of being able to make an impact with your own two hands. The mentors I worked with at Norwalk helped solidify my decision. While shadowing them I got to see how knowledgeable they were and what a diverse skillset they had. Having that diversity and knowledge and being able to make that kind of impact was something I wanted for myself.”

While Cornacchia entered the U.S. MATCH as well as CaRMS (the Canadian Resident Matching Service) as a Surgery candidate, his sights were always set on returning to Canada for his residency.

"Matching into General Surgery at the University of Ottawa was a dream come true,” he said. “After four years of hard work and sacrifice, I could not be more excited to begin the next phase of my medical career. It was my goal to match into a program in Ontario and I was beyond thrilled to see that all the effort and time I put into making it a reality paid off. I’m incredibly grateful not only for the opportunity given to me to pursue my medical degree, but now to become a surgeon in Canada. I can’t wait for what residency has to offer."

As he waits for his new life as a medical resident to begin, Cornacchia is taking a well-deserved break to reflect on how far he has come.

“It feels great and surreal at the same time,” he said. “It’s been such a long journey that is, in some ways, just beginning. When I was cleared for graduation I felt so proud to have accomplished this goal because there was a time when I wondered if it was ever going to happen. Ross means a lot to me because they gave me the opportunity to achieve my career goals, and I’ll be forever grateful for that.”