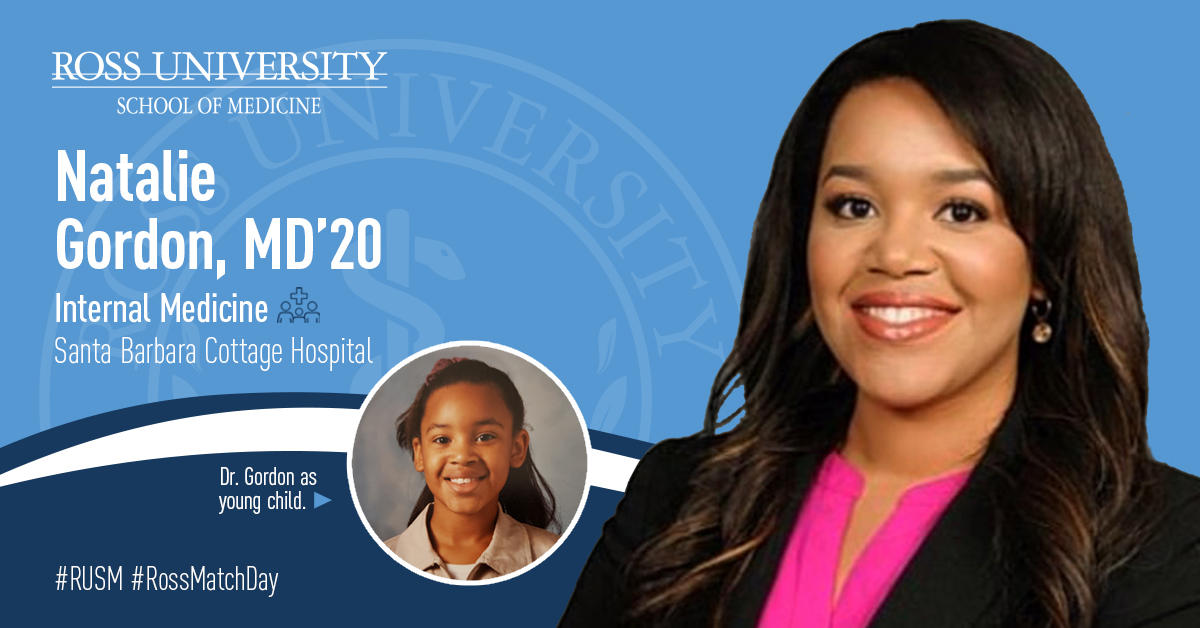 Growing up, Natalie Gordon, MD ’20, always talked about becoming a doctor. Some of her earliest memories are of accompanying family members to various doctor appointments and of watching the Discovery Health channel’s Operation Smile, a show that presented real accounts of physicians providing free surgeries to people around the world.

Gordon decided at an early age that she wanted to follow suit and travel to different countries to help people in remote communities; however, as she grew older, she realized that there was a need closer to home – especially in underserved areas – for physicians who had a better understanding of these communities and the people living in them.

“When I got into college, I started to become more aware of the health disparities in America, especially among certain races or socioeconomic classes, and also hearing from family members who weren’t having the best experiences with their doctors, and I felt like I might be just as useful here,” she explained. “Wanting to give back to the community was my biggest reason for wanting to become a doctor.”

Another of Gordon’s goals growing up was to be the first member of her immediate family to go college. She applied, and was accepted, to The University of Texas (UT) at Austin, where she received a degree in Human Development and Family Sciences.

“I always knew I wanted to pursue medicine, but in college I wanted to explore something outside of a typical premed degree. I thought it would be helpful to understand the development of human relationships and how they impact healthcare decisions,” she said. “This became a great talking point in a few of my residency interviews.”

After graduating from college, Gordon enthusiastically moved out on her own, got a full-time job, and starting working on her medical school applications – all while studying for the MCAT.

“It was definitely a lot to deal with in one summer, and I didn’t put together the best application the first time,” she said. “After taking my MCAT a second time and going through another round of applications, I started hearing about Caribbean medical schools from a friend, but at the time I didn’t really know anything about them.”

On a whim, Gordon decided to attend a Ross University School of Medicine (RUSM) Information Seminar in San Antonio.

“I went from thinking there was about a 10 percent chance of applying on the way there to 100 percent wanting to apply,” she said. “The alumna who was speaking had a story that resonated so much with me – it was just completely in line with mine – and it seemed like the school had a bigger purpose that resonated with the reasons I wanted to become a doctor. So, I ended up applying and going the following May.”

Gordon noted that she felt a great deal of support from RUSM during her medical school studies, which was something she was extremely grateful for.

“I felt supported right from the beginning,” she said. “You have to do your part and stay on top of things, but Ross shows you the steps to take as you go. It’s your responsibility to do the work and find the resources that will help you learn the material, but Ross does provide all the tools you need to be successful.”

She continued, “When I’m a resident, no one is going to do my work or make decisions for me. Being a ‘Rossie’ became an advantage during my clinicals because they could see we were self-driven and there to work hard. I know this will definitely benefit me in the future.”

Almost from the get-go, Gordon’s had her heart set on securing an Internal Medicine residency at Santa Barbara Cottage Hospital – which is exactly what she did.

“I was super excited after I got my first invitation to interview,” she said. “Overall, I got 26 invitations and went to about 13 of them. “My interviews were an eye-opening experience because I was sitting next to people from the top medical schools [and] that’s when I realized that we’re all given the same equal shot to a residency opening, which was amazing to see.”

She went on to explain that she chose Internal Medicine because it’s the “basis for everything,” and because she was drawn to the inpatient experience of working with different teams, interpreting daily labs and imaging, and talking with her patients in an acute setting.

“Whatever area you decide to go into, you need to have that basic pathophysiology knowledge,” she said. “Going forward, I do have an interest in specializing in Gastroenterology, but am thinking more Hospitalist at this point. I really enjoy my time developing relationships with patients on the hospital floors.”

She continued, “I feel like I’ve come full circle. This program is a perfect fit for me since it combines all my desires of helping underserved communities, having the opportunity to mentor International Medical Graduates like myself, and finish my training where it all started – by the beach! I've always wanted to go to California and am excited for this new chapter in my life to begin. People thought these dreams would pass with time, but for me, they grew even stronger. It’s kind of surreal knowing that you finally achieved what you always set out to do. I’m happy to say that it’s finally all about to pay off.”