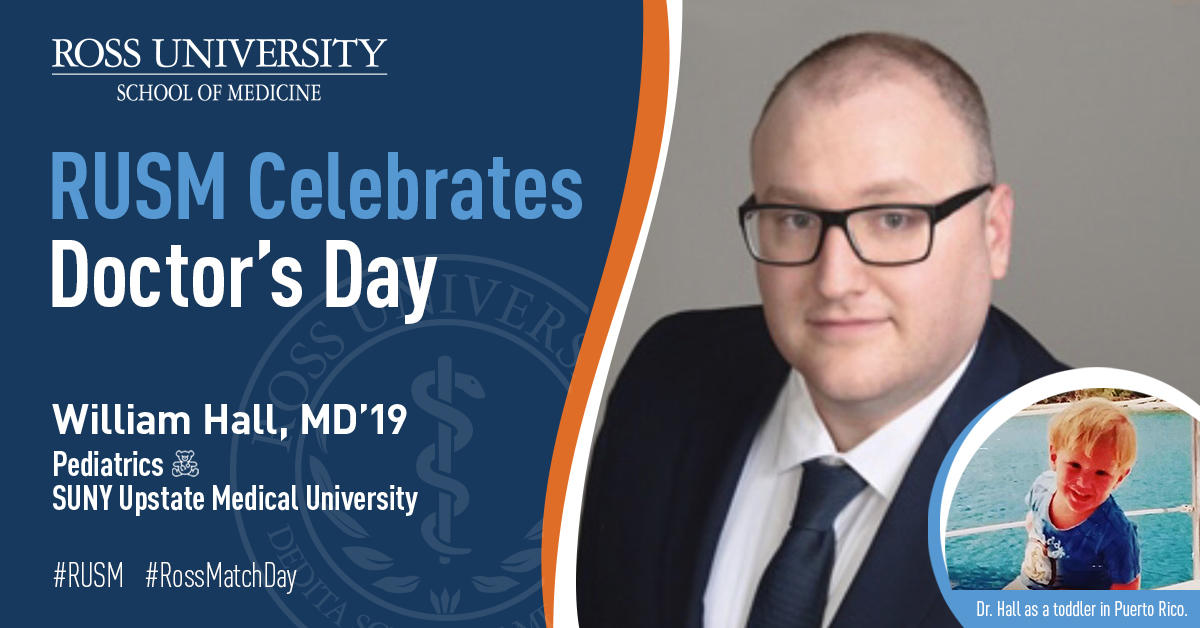 William “Billy” Hall, MD ’19, isn’t exactly sure where his desire to become a physician came from. The first physician in a family where only a select few had gone to college before him, Hall started doing EMT work after high school and discovered he had a love for helping people that, over time, grew into more.

“I’ve always loved figuring out how things worked, but as an EMT I wasn’t getting a lot of information as to why I was doing what I was doing. It was more about following protocol and there was never any good information and I wanted to know more, and that really started it all,” he said.

In high school, Hall had always excelled in the sciences so he decided to “go for it” as a premed student at Florida Atlantic University (FAU), where he helped start an organization that helped children with physical disabilities learn water resistance training by teaching them how to swim.

“It was called Adaptive Aquatics at the time and still exists under another name but has evolved to include kids with other disorders, such as ADHD and autism,” he explained. “I had already kind of decided on Pediatrics before even going to college, but doing that and then my core rotations helped to solidify my decision.”

Before even graduating from FAU, Hall had gone to a Ross University School of Medicine (RUSM) Information Seminar and come away impressed by the school and its offerings. So while he did apply to U.S. medial schools, RUSM was the school that “gave me the opportunity,” he said.

“RUSM interviewed me and three weeks later they accepted me and at that point I was like I’m going, even if I get interviews for U.S. schools it doesn’t matter, because I’m going to RUSM,” he explained.

Always one to keep busy, once he got to RUSM Hall joined the Pediatrics Club, the Student Government, and the Ross Band.

“I was a student council rep for two semesters and president for one and the band was great. We played gigs on the island all the time,” he said.

He noted that going to RUSM – and his time in Dominica specifically – was a learning experience for him in ways he hadn’t expected.

“It humbled me to see how others lived. We would set up clinics for the locals in their own villages and if we hadn’t they wouldn’t have gotten medical care for who knows how long because they would have had to shuttle to the capital that was hours away. Seeing how other people live and how much we take for granted here, that humbled me like crazy,” he said.

Having grown up as the oldest boy with six siblings, Pediatrics almost seemed predestined for Hall.

“I’ve always taken care of kids,” he said. “I enjoy their honesty. They tell it like it is. As of right now, I’m leaning toward pediatric emergency or pediatric cardiology, in addition to being interested in preventive care.”

Now poised to begin a Pediatric residency at SUNY Upstate Medical University, Hall is eager to begin his career as a physician and grateful to have been given the opportunity to achieve his dream.

“It feels so amazing that a hospital decided to choose me over thousands of applicants for this position,” he said. “I am beyond excited and super ready to start residency at SUNY Upstate.”

He added, “RUSM changed my life. They gave me what I needed to succeed and I feel ready for residency. It’s taken a long time to get here.”