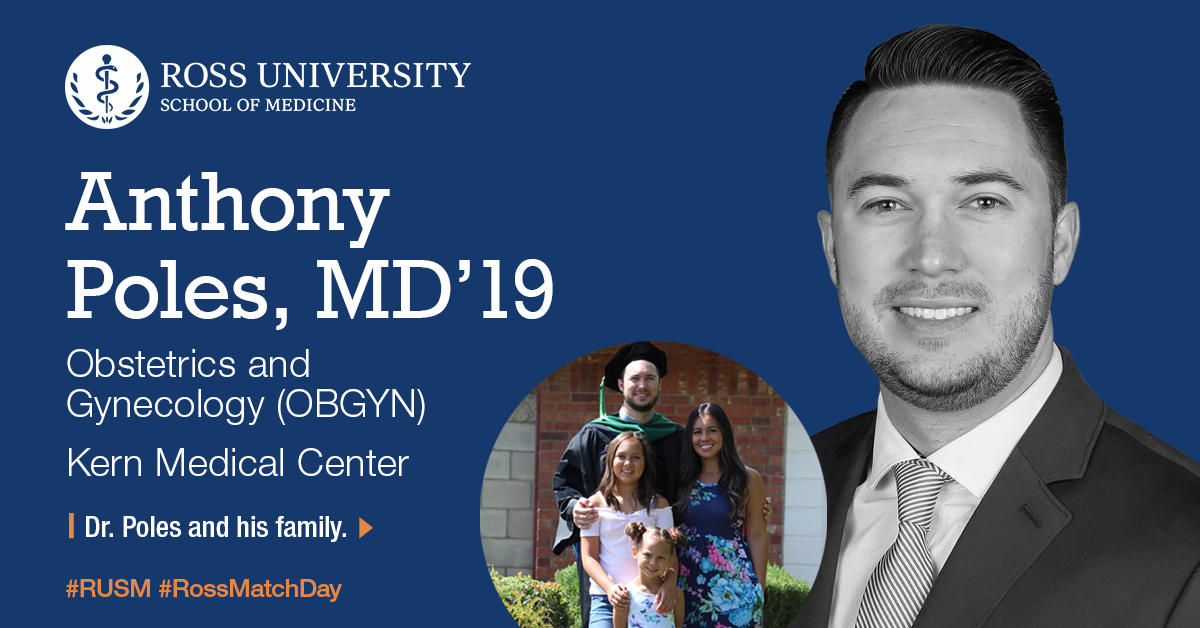 In a class with a strong 95.2% first-time residency attainment rate, Anthony “Tony” Poles, MD ’19, stands out as being one of four individuals to attain a residency in the particularly competitive specialty of OBGYN at Kern Medical – an accomplishment that, for him, “no words can describe.”

Poles was inspired to become a physician in college after his grandmother, with whom he was very close, began experiencing a series of health issues that ultimately resulted in a stroke.

“Up until that point, I had been going back and forth between engineering and medicine. After the whole situation with my grandmother, however, I ultimately decided to go into medicine,” he said.

Poles learned about Ross University School of Medicine (RUSM) from two friends who were in attendance there. After doing his own research and speaking with the admission staff, he decided to apply, and was subsequently accepted to the September class of 2015.

“I was particularly interested in the fact that Ross had a tracked clinical program in Bakersfield, because California was ultimately where I, and my family, wanted to be,” he said.

His arrival in Dominica coincided with the arrival of Tropical Storm Erika, which resulted in a somewhat rocky start for him; however, Poles couldn’t help but be impressed by the way the RUSM students and staff and Dominicans worked to “put things back together.”

“When I got there, a lot of people were suffering. But people really pulled together, which was great to see. It was a lot of new experiences all at once,” he said.

A husband and father to two children and a wife who were back in the States, Poles noted that it was challenging at times to find a balance. He eventually found his groove, however, and even became a sort of “father figure” to his fellow students.

“I was a parent to all my friends,” he joked. “That may have helped me and kept me more grounded. Knowing I had something I wanted and that I couldn’t let my family down helped me to stay focused.”

While Poles entered medical school certain that he wanted to specialize in OBGYN, he found himself drawn in other directions along the way, especially once he started his clinical rotations.

“It’s kind of weird how it all ended up happening exactly how I wanted it to,” he said. “I did everything from start to finish at Kern Medical. I really enjoying surgery, so I kind of tiptoed in to OBGYN not really knowing what to expect.”

It didn’t take long for him to discover that OBGYN was still the right fit for him, however.

“It was the only rotation that I literally could not wait to come back to the next day,” he said. “When I’d hear the stories of the patients, tears would come to my eyes and I knew automatically that this was the right choice for me.”

Poles also knew that Kern Medical was the right fit for him for residency, but realized that the smart thing to do – especially when applying for a competitive specialty such as OBGYN – was to cast as wide a net as possible.

“I applied strictly to OBGYN and knew my chances were more heavily on the East Coast, but I had worked really hard at Kern to make a good impression, just hoping that whatever I did would help me solidify having a chance here.”

“Words can’t describe how it felt when I found out I’d matched here,” he said. “I was working when the email came through so I read it, excused myself to call my wife, and then went right back to work. But it was a great day for sure.”

When asked what he is most looking forward to as a resident, Poles said, “Working hard. That’s all I want to do. I’m going to do whatever I can to help my patients and give them the best care I can.”

As he sets out to embark on the career he’s been dreaming of for so long, Poles is very conscious of the opportunity he’s been given, and never misses a chance to promote his alma mater to aspiring medical students who cross his path.

“Without RUSM, I never would have been able to achieve my dream and I will always be thankful for that,” he said. “I’m steering people toward RUSM as well. When friends of mine have kids who want to go to medical school I tell them, if you want a good education and you’re going to work hard, RUSM is a great place. Go for it and give it all you’ve got.”