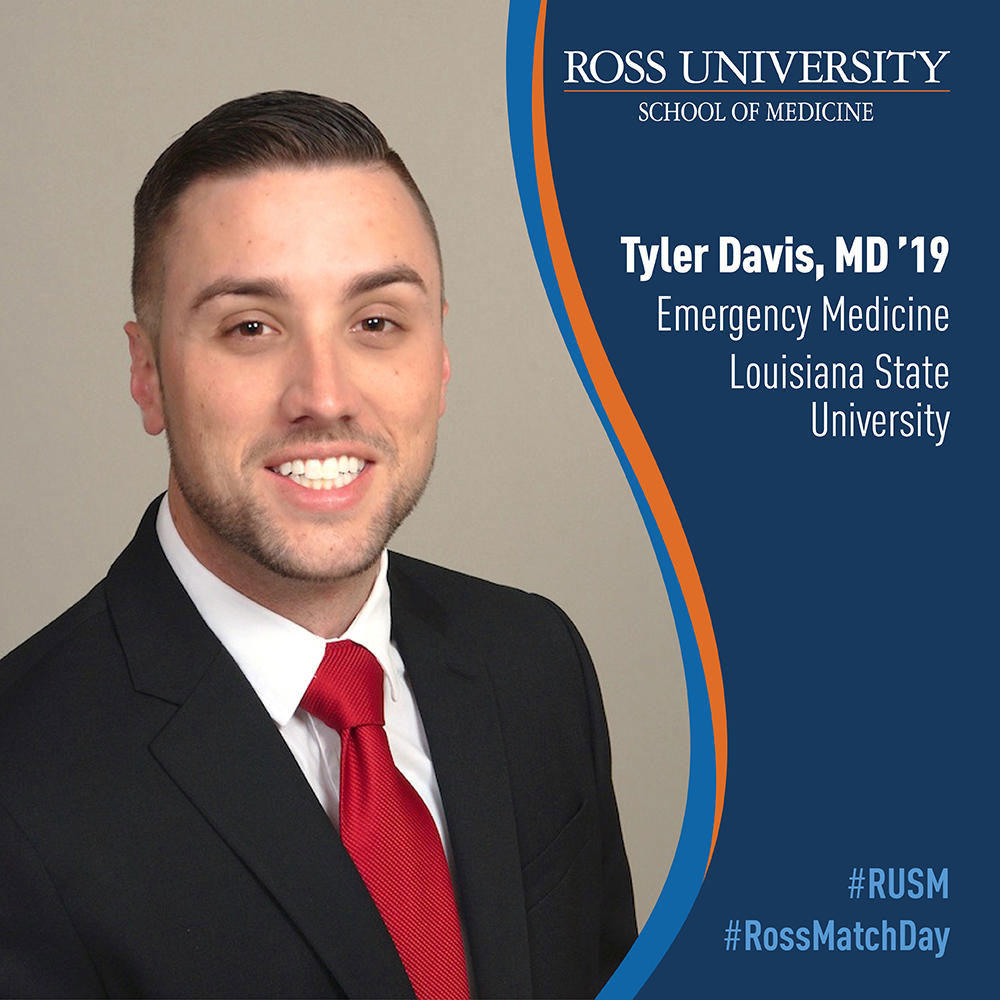 HOW A 2019 RUSM ALUMNUS WENT FROM MEDICAL STUDENT TO PHYSICIAN AT 31,000 FEET

For many medical school graduates, the realization that they have transitioned from student to doctor doesn’t fully sink in until residency begins, but for one 2019 Ross University School of Medicine (RUSM) alumnus, the transition occurred somewhat earlier than he’d anticipated – on the flight to commencement, in fact.

Tyler Davis, MD, was en route to this year’s RUSM graduation ceremony with his family when an announcement came across the intercom asking if there were any doctors or medical professionals on board. When no one responded, Davis found himself rising to his feet and going to the back of the plane, where he found a passenger in the midst of a seizure. No sooner had he stabilized that patient when another passenger also began seizing, and he found himself tending to that person as well. Once both patients were stable, he was then put in the position of having to decide if the flight should continue or land prematurely – and in that moment, the full weight of the fact that he was a doctor really hit home.

“Prior to that flight, I have never witnessed a medical emergency on an airplane, ever. So it’s bizarre that one occurred back-to-back on the way to commencement. It truly put things into perspective and made becoming a physician feel real,” he said. “I felt honored to be able to assist those two passengers. Ross has given me the tools and confidence needed to truly be able to help people in an emergency setting.”

Because Davis’ father is a physician, he was exposed to the profession from a young age. He explained that the “countless” times strangers would approach his father to thank him for taking care of them or a loved one had a strong impact on him, and inspired him to want to follow the same path.

Davis learned about Ross during his time as an emergency room scribe in college and liked the fact that its location offered few distractions.

“You get to focus,” he said. “Throughout my time on the island I would frequently go to the beach to study. This allowed me to reset my mind in a peaceful, beautiful environment.”

Another aspect of Ross that Davis will forever be grateful for is the strong friendships he formed while in Dominica.

“One of the things I absolutely love about Ross is the camaraderie,” he said. “You make friends with people who are going through the same situation as you and an unbreakable bond develops. You push each other day in and day out. I definitely made lifelong friends on that island, no doubt.”

Having matched in Emergency Medicine at his first choice hospital in his home state, Louisiana State University, Davis’ sights are set on the future and he is looking forward to serving in the community in which he was raised.

“I’m passionate about Emergency Medicine. I love the idea of being able to help a complete stranger in their darkest hour. I enjoy the fast pace as well as not knowing what could come through the ambulance bay doors at three in the morning. This specialty encompasses a large scope of practice, and that is something I admire,” he said.

He noted that he feels prepared for the rigors of residency because of the training he received at Ross, and because of the growth he experienced in himself during his time there.

“In every aspect of life I feel I’ve grown,” he said. “I have self-pride knowing I completed something so difficult and demanding as medical school. I can remember being on the island and just going day in and day out and being like is this ever going to be over, because it’s rough. There is nothing easy about it, but it’s one hundred percent worth it.”

When asked how he would describe Ross to aspiring medical students, Davis responded, “Ross gives you every tool necessary to be successful, but you definitely have to want it. You have to be hungry for it. Ross gives people an opportunity to pursue their dream when no one else will, and I will always be appreciative of that. Success is yours for the taking, you just have to put in the work.”