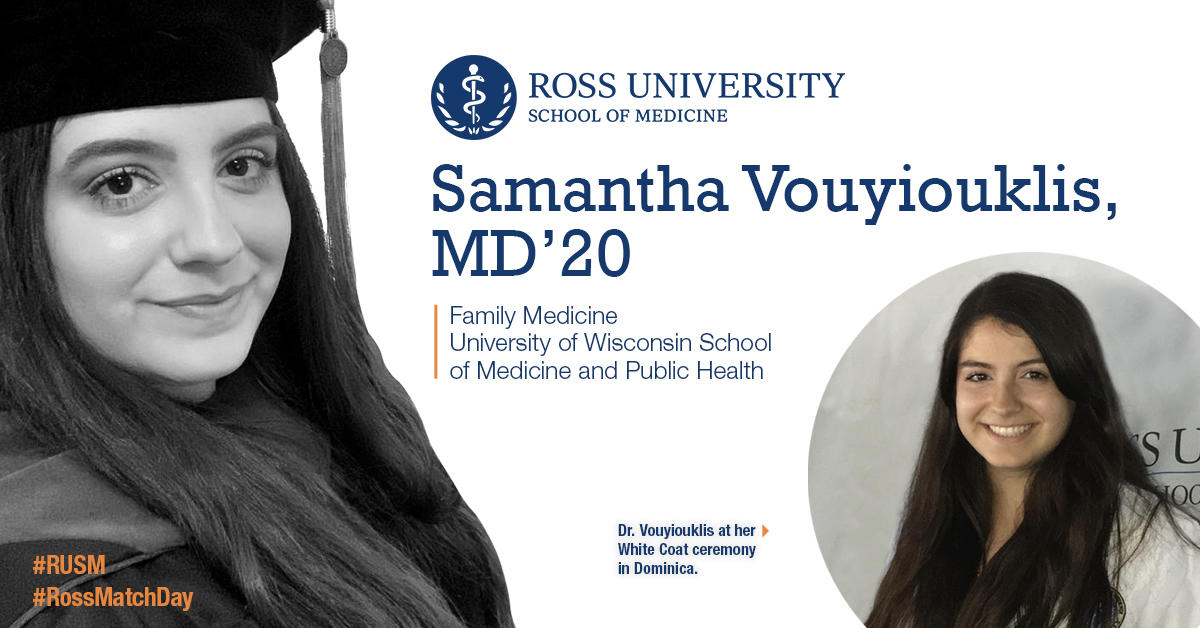 When Samantha Vouyiouklis, MD '20, graduated from high school, she received an award for being the ‘student who knew what they wanted to be from their very first day of school.’ As her Biology teacher gave it to her, she said, “You’re going to be a doctor. I can see it in your eyes.” And on March 31, 2020, when Vouyiouklis received her MD from Ross University School of Medicine (RUSM), she did just that.

Growing up, Vouyiouklis was very close with her grandmother, who had a series of health issues in her later years. Some of Vouyiouklis’ earliest memories are of accompanying her family to various appointments, where the doctors left a great impression on her. No one more so, however, than her grandmother’s primary care physician, who always took the time to make sure that her grandmother, and the rest of the family, were coping well and clear on the details and implications of her grandmother’s health concerns and care. “What he did for us is what I want to do for others – pay it forward,” she explained. “Even though it was challenging to take care of my grandmother, we always left her family doctor’s office knowing what we had to do and what to expect.”

As a premed major at Brooklyn College, Vouyiouklis was in the midst of preparing to take the MCAT when a tragic event in her family caused her to delay.

“I was not in the proper mindset to take an exam that was going to determine whether or not I was going to get into medical school,” she explained. “I didn’t take it until my senior year of college. At that point, I had friends who had great [MCAT] scores and GPAs who weren’t getting into US schools, so I started to weigh my options.”

Vouyiouklis’ older brother, who is also a physician, had gone to medical school in the Caribbean, and she knew they could offer her more flexibility.

“The US timeline just didn’t work for me,” she said. “My brother encouraged me to look into RUSM. Within a week of applying to RUS<, I had my interview and was accepted. It was the best decision I ever made. I have friends who decided to go the US path and they have quite some time remaining before they finish.”

From start to finish, Vouyiouklis’ experience at RUSM was “great.”

“I was so happy to be in medical school. My friends at RUSM told me I walked around campus with a smile on my face all the time,” she said. “It was hard, obviously, but you’ve got to make it through. There’s always someone at Ross you can turn to for support, and you also have the support of your fellow students, which is rare to find in most medical schools. Not only did my dream of becoming a physician come true by going to Ross, but I also made wonderful bonds and friendships with my colleagues. I enjoyed every minute of my journey.”

Given her background, one might think that Vouyiouklis would have had her heart set on Family Medicine from the start, but that wasn’t the case.

“Although I didn’t decide that I wanted to pursue a career in Family Medicine until my third year core rotations, I entered medical school certain that I wanted to go into a specialty that would allow me to make strong connections with my patients and their families,” she said.

She continued, “When I walked into Family Medicine, I knew that was it. The shoe fit, just like in Cinderella. It was my moment; however, I didn’t choose a wedding dress or a shoe, I chose my specialty.”

Having decided on her specialty of choice, Vouyiouklis started making preparations to enter the 2020 National Resident Matching Program® The MATCH℠, but once again, timing was not in her favor.

“Like many other medical students around the world, I had difficulty in finding a USMLE Step 2 Clinical Skills examination date,” she explained. “After months of what felt like an infinite number of times of refreshing the scheduling page, I finally found a test date for August 16in Philadelphia.”

The date was just three days away from when Vouyiouklis was scheduled to take the USMLE Step 2 Clinical Knowledge exam in Chicago; however, after a helpful pep talk from her brother, she knew her only path was forward.

“I did what any other RUSM student does when their strength, determination, and capabilities are tested,” she said. “I buckled down and studied, as I was determined to knock those exams out of the park.”

Her efforts paid off, and by September, her inbox was “flooded with interview invitations.”

“I actually had to take two months off from rotations to go to my interviews,” she said. “I was in a state of disbelief. Having gone through so many obstacles and bumps along the way, I often asked myself, is this really true?”

When she learned the news that she had matched at her top choice – the University of Wisconsin, Eau Claire – Vouyiouklis could hardly believe it.

“It was the exact program I wanted,” she said. “I was looking for a hospital in which Family Medicine is the only residency program, as it provides more hands-on experience to its residents. I’m also very interested in Obstetrics, and am hoping to do an Obstetrics fellowship once I complete residency. The University of Wisconsin has a strong Obstetrics curriculum and all of their Family Medicine faculty is trained in Obstetrics. So it was really a no-brainer for me.”

When asked what she is most looking forward to in residency, Vouyiouklis said, “I’m so looking forward to finally being in a position in which I have to start making decisions. As a student, you’re part of the team and are expected to have information no one else has, and from that little bit that you do you feel so accomplished. So, I can only imagine the feeling when you are the person to help make the decisions that will impact your patients’ health and life.”

As she takes some time to reflect on how far she has come, Vouyiouklis noted that the fact that she is finally a physician still feels surreal at times.

“I can’t even describe the feeling. I have to look at my name with the ‘MD’ at the end to make sure it’s real,” she said. “When I realize I have earned these two letters and what they mean, it’s such a sense of accomplishment. Two little letters, but they mean so much!”