He understands the challenges of a being a Black man with Nigerian family roots. He also recognizes the urgency of providing the Black community with doctors who share their identity and best understand their physical and mental-health struggles. As the first physician in his family, Ross University School of Medicine (RUSM) fifth-semester student Ifeanyichukwu Ozobu aims to change the trajectory of Black representation in medicine. 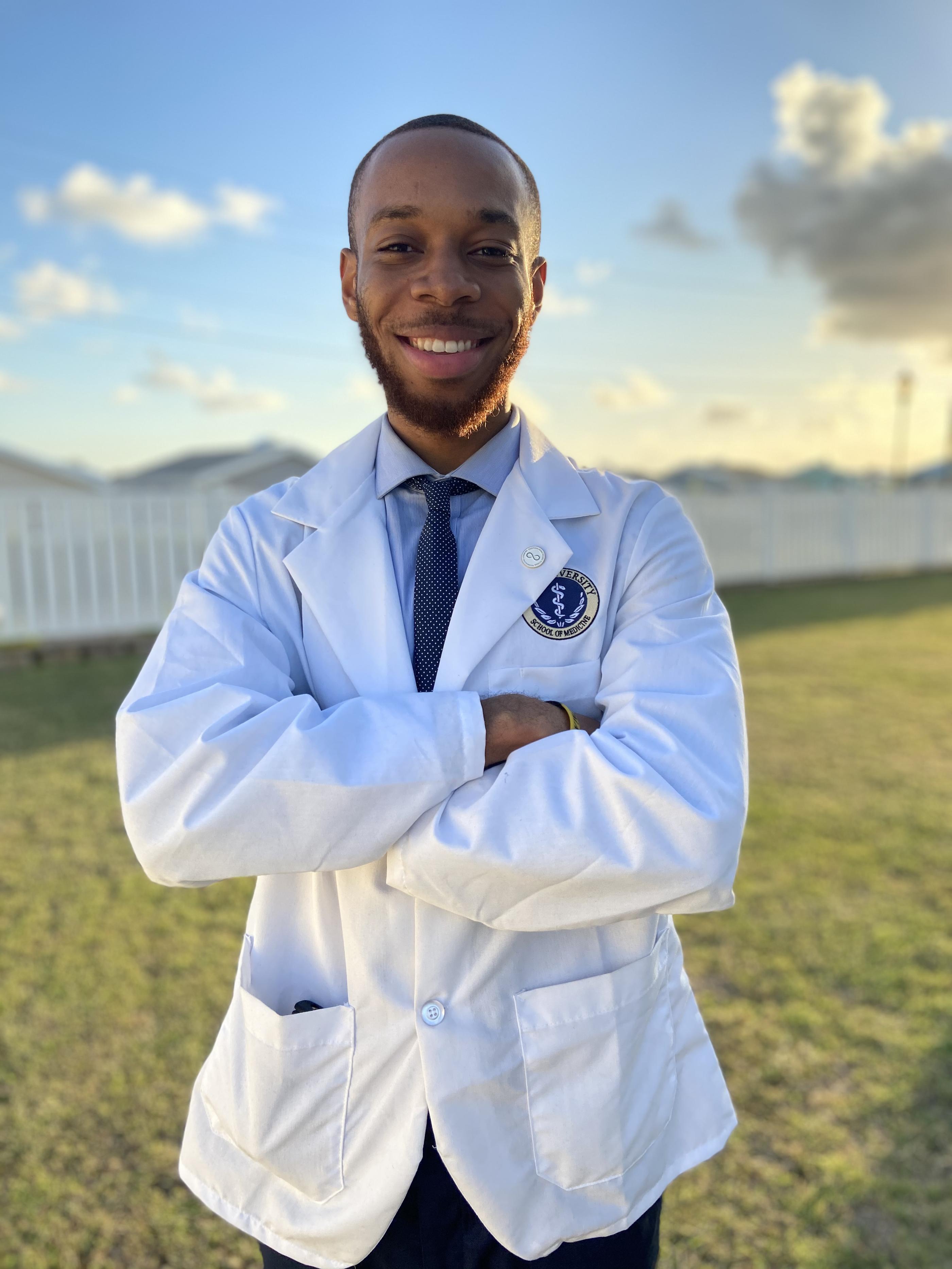 “There are not  many Black males or females in medicine, so we need to keep that group close knit and help them along the way,” said the co-founder and past president of the Black Male Doctors (BMD) organization, which provides a supportive space for Black and other students from under-represented groups who crave emotional and academic support. Ifeanyichukwu, along with classmates Michael Garrick and Marcellas Knight, started the RUSM club in 2019, and the enrollment of medical sciences students has nearly doubled since its launch.

“We need to introduce STEM programs to Black students starting at a younger age such as in middle school and elementary school,” Ifeanyichukwu said about how to begin balancing the scale. The future physician is connecting with his former high school counselor to emulate the RUSM partnership with Historically black colleges and universities (HBCUs) and Hispanic-Serving Institutions (HSIs). “We need more support from institutions to create a better overall system. We need to start early if we’re going to change the mindset. We need to show students that it is possible for Black people to be successful in other areas besides sports and entertainment.”

On the Right Path for Change

Though he experienced some discrimination during his undergraduate years, such as receiving non-supportive comments about his medical future and experiencing unfounded police interrogations because of his skin color, Ifeanyichukwu only looks forward. He believes there’s a building momentum for change that began last year after the senseless deaths of Black individuals by the police, but he’s also cognizant that the pace must remain steady and eventually expand for ultimate success. “It’s not enough yet and there’s still so much more that needs to be done. We need ongoing efforts to ensure there’s going to be a real impact.”

While Ifeanyichukwu studies for the United States Medical Licensing Exam Step 1, he is developing a community support system for clinical students, right now through a group chat. “We need to find a way to stay connected with a network of people to help us if we get hit with obstacles.” He is hopeful that someday there will be a medical mentoring program that matches Black students with Black advisors. “Once you see a positive role model who looks like you, you realize he’s been in my shoes and understands what I’m going through. That motivates you to want to keep going because you can see yourself in that person.”

Clinical rotations are next on the docket and Ifeanyichukwu is ready to adapt to different situations in the hospital, a skill he learned as a medical scribe before RUSM. “I got a clear view of how things can change quickly. You have to be prepared.” He also appreciates the need to practice self-care, especially as a medical student. “Most people are afraid to get help but as future doctors, we have to foster both physical and mental health. It’s ok to practice that now and take a rest to do things you enjoy.”

Growing up in Maryland in a family-oriented, academically driven household, Ifeanyichukwu is the oldest of four children. He enjoys spending time with loved ones and participating in community-service charitable projects, sponsored by his college fraternity, Alpha Phi Alpha. The soccer, basketball and track enthusiast describes medical school as “an endless fire hose of information” that’s manageable and rewarding.

Reflecting on a recent BMD-sponsored video that illustrates Black culture, Ifeanyichukwu said, “We saw the injustice last year and we wanted to create something that was powerful and provided a source of motivation and positivity during a time of bleakness and darkness. It’s a powerful video symbolizing Black people’s importance in society and being more than what they are stereotyped as.”

Make sure to check out our Black History Month Alumni Spotlight seminar.

A group of 16 RUSM students, faculty, colleagues and alumni have begun leading a holistic review of diversity and inclusion at the University and will soon deliver a report of short- and long-term recommendations. This is the first of many steps to sustain change at the infrastructure level.