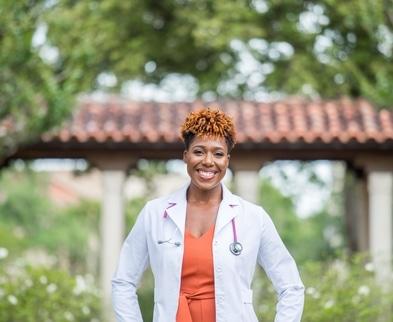 It Only Takes One: 2019 Alumnus Achieves Her Dream, Becomes a Trailblazer for Others

Laurenie Louissaint, MD ’19, is all about breaking barriers. This courageous Ross University School of Medicine (RUSM) graduate has gone from Division 1 athlete, to athletic trainer (AT), to personal trainer, to doctor – and as she so eloquently put it, “The story doesn’t end there.”

Louissaint’s mother and grandmother, who were known as the caregivers of their community, inspired her interest in the medical field.

“I always knew I wanted to help others, but in terms of pursuing medicine, it was a scary thing to own up to initially,” she said.

A first-generation student, Louissaint’s parents moved from Haiti to Montreal, Canada, when they were in their teens and worked hard to give Louissaint the kind of opportunities they didn’t have.

“I come from a family where I was the first one to get a graduate degree,” she said. “No one has [done] post-doctorate studies and there are no doctors or anything like that. But my perspective was always, why not? What’s stopping me?”

Louissaint’s path to medical school was shaped by several key choices that she made both during and after college. She attended Florida International University in Miami on an athletic scholarship, where she developed an interest in athletic training.

“I decided to go down the AT track, which was amazing,” she said. “It created a foundation of knowing how to connect with my athletes, which one day would become my patients as a physician, and understand what they go through having injuries and the whole rehab[ilitation] process.”

Louissaint was in her last year of graduate school and considering a career as either an AT or physician assistant (PA), when someone asked her a very pointed question.

“I remember one of the therapists saying, ‘Why do PA when you can become a doctor? What’s holding you back?’ And I started thinking about it,” she said.

Soon after, Louissaint explained that her world was completely rocked by the news that a catastrophic earthquake had hit Haiti in 2010.

“I’ll never forget that moment because it felt like an out of body experience and [I] just wanted to run to Haiti and be with my family and help,” she said. “I remember reaching out to so many organizations and everyone telling me no, you’re not a physical therapist, you’re not a doctor, you’re not a nurse, you’re not qualified to go and provide care. I was so frustrated. It was a culmination of that and also hearing in my AT program that this is outside of our scope of practice, the physical therapists do this, the doctors do this, and we just do this. I’m someone who doesn’t do well being boxed in and was like, you know what? I’m going to go to Haiti and I’m going to help.”

Louissaint did go to Haiti, and came back determined to pursue her medical degree so she could return one day and provide care on a more advanced level. First, however, she completed her graduate degree and then spent a few years as a personal trainer, gaining experience and figuring out what her next steps would be. Along the way, people kept mentioning Ross to her, and she decided to apply.

“I’ve always been a person who was up for what everyone was scared to do and when I heard of Ross and where it was and [how] it was an opportunity to pursue medicine I was like, why not?” she said. “The first cycle I had only applied to U.S. medical schools and didn’t get one interview. My main issue was my MCAT [Medical College Admission Test] score. That second cycle, Ross was my only interview. The exact words my mom said were, it only takes one. And when I got that acceptance I was like, this is where I’m going.”

Louissaint noted that she loved her experience at Ross, especially the respite that Dominica provided.

“There was a peace and calm in the middle of the stress of medical school that was the perfect balance. It came with its ups and downs obviously, but I loved it,” she said.

Now that Louissaint is graduating from medical school and finally has those important credentials behind her name, she is looking forward to the next chapter, which includes residency at her first choice hospital, Icahn School of Medicine at Mt. Sinai in New York City (NYC) in Physical Medicine & Rehabilitation (PM&R). Before heading to NYC, however, she will spend a transition year through the University of Central Florida at North Florida Regional Medical Center in Gainesville, FL.

“Ross gave me the opportunity that no one else did, and through that I’ve developed a level of grit, motivation, ambition, and passion for medicine,” Louissaint said. “There is a Haitian proverb that translates to: there are mountains beyond mountains. The idea being that you’ve climbed one mountain and succeeded [in achieving] one goal and are now equip to accomplish the next goal as well. I’ve already climbed one mountain, so I have the mentally and grit and motivation to get over the next one.”

Alumni
, Residency
, and Tips for Students