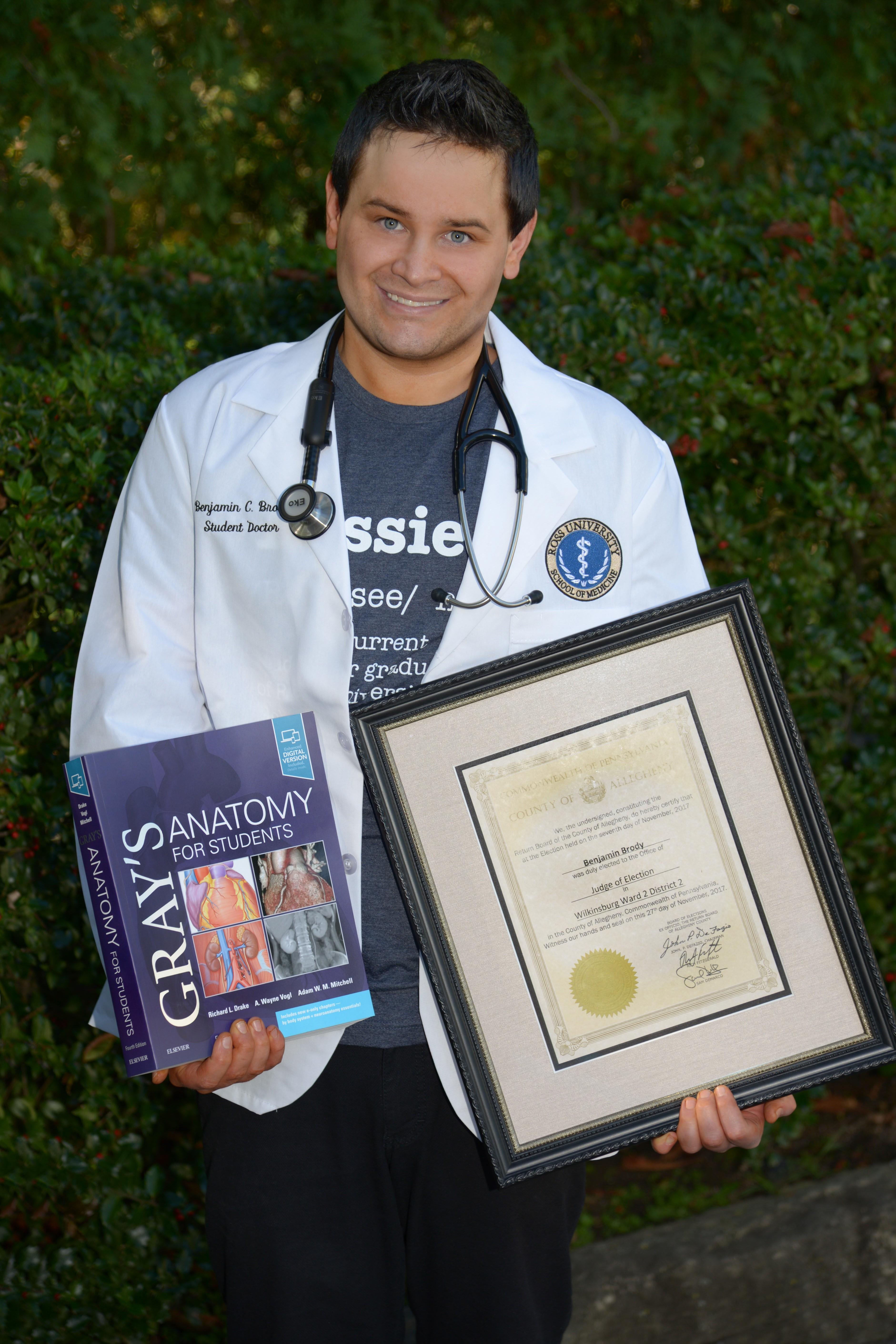 In a burst of strategic career moves, Ross University School of Medicine (RUSM) student Ben Brody, JD, started as a mediation lawyer, advanced to a criminal defense litigator and then was elected to uphold and protect the integrity of the electoral system. Like any true decision maker, the now supervising election judge who just completed primaries, decided to weigh his professional options before heading further into politics. He reached a unanimous verdict — Ben will follow his childhood passion, exchanging his gavel for a stethoscope, still serving the greater good of the people but now as a healer.

“Medicine is such a pure way of helping people,” said the proud incoming September 2020 student, surrounded by anatomy books in his Pennsylvania home office. “As a lawyer, there’s not a lot of purity of heart — the DA wants to win, the defense wants to win and the judge wants to come away unscathed. Medicine just seems more pure.”

Though medicine was his passion, Ben decided to utilize his debate skills in a court room and turned to family law after witnessing his parents’ ugly divorce that landed in the Supreme Court. He earned his juris doctorate simultaneously with a master’s degree in dispute resolution and then founded a mediation firm to help a couple part amicably. After four years, he joined a criminal defense team and landed a few high-profile cases. “I’m a big believer in putting pressure on every point possible before the courts.”

Then he set his sights on judgeship. Though the role — now as supervisory judge — has been rewarding, Ben couldn’t resist daydreaming about his childhood hopes of becoming a physician. He remembers shadowing his anesthesiologist father during a 10-hour Whipple procedure when he was only 14. “It was incredible. I thought of that and just realized I have to go for it. This decision comes from a place of love and I know it will tremendously enrich my mind. I’m signed, sealed and delivered at Ross University. I can’t wait to begin this amazing journey with an institution that has already won my heart. As an older student as well as an elected judge, I want to show others the diversity and tradition of excellence RUSM is renowned for.”

Ben declined acceptances to many medical schools including top-ranked institutions in the U.S. because he was enamored with RUSM’s reputation. “Leadership isn’t afraid to make tough calls,” he said about RUSM’s exit from Dominica after Hurricane Maria. “I have a lot of respect and admiration for what they’ve done.”

A Pittsburgh native who enjoys traveling, Ben is leaning toward a surgical specialty and taking it in stride that his first semester won’t be on campus in Barbados. “It’s just one of those things — a balancing act of getting a good education while keeping safe.”

Recently, Ben recited the Hippocratic Oath via video conference in preparation for his virtual White Coat Ceremony. “The Geneva just moved me,” he said. “Pledging to use your talents and knowledge in the right way lays the groundwork for what I’ve been saying — being a doctor comes from an incredible place of purity.”

RUSM’s Fall 2020 Virtual White Coat Ceremony will take place on Friday, September 11, 2020 at 3:30 pm ET. The ceremony will be broadcast on RUSM’s Facebook and YouTube pages.