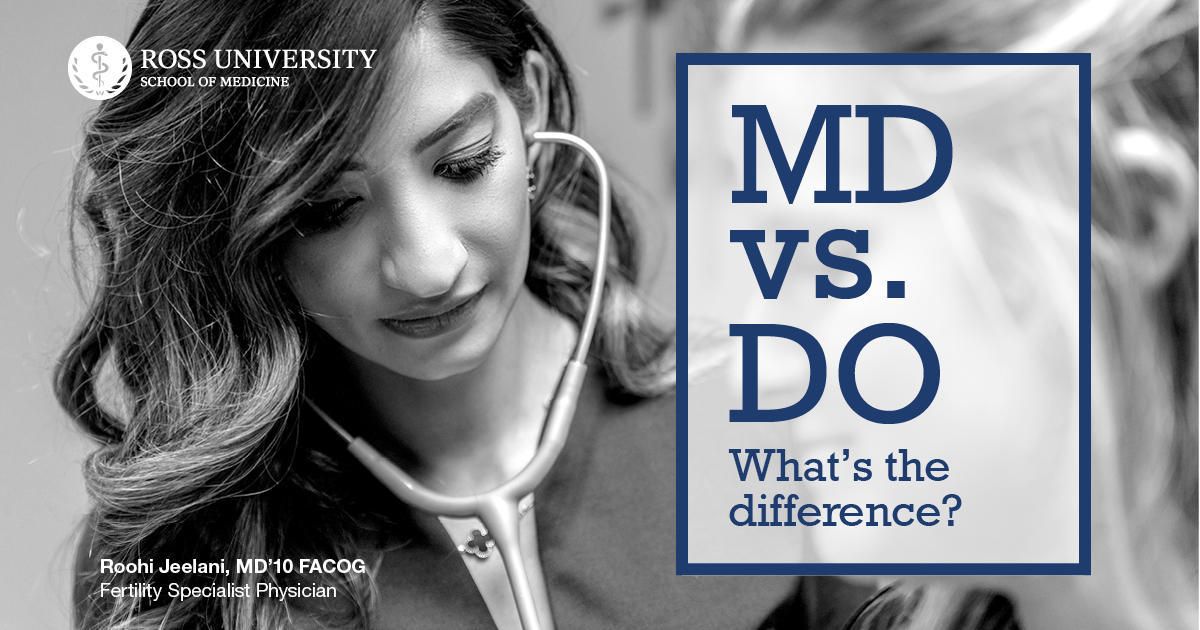 MD vs. DO: What’s the Difference? And which is right for me?

These questions are being asked more than ever before by prospective medical students today. As the academic and licensure differences between the two continues to shrink, the decision of which path – MD: Doctor of Medicine, or DO: Osteopathic Doctor – is right for you may ultimately rest on personal preferences, and your professional goals as a physician.

According to the American Medical Association (AMA), although the percentage of those choosing the DO route is rising, the overwhelming majority – or ~75% – of all medical students ultimately decide to pursue an MD.

While the decision is highly personal, there are several factors that often play a vital role in the final call. These may include: reputation, salary potential, degree of specialization, residency opportunities, and the prospect of professional opportunities abroad.

How are the MD and DO similar? In the United States, both MDs and DOs undergo rigorous study in the field of medicine, receive licensing credentials from the same licensing boards, are required to meet the same standards for practicing medicine, and are eligible to practice in all 50 States. It should be noted that while the DO degree is now recognized in 44 countries abroad, including Canada, as the equivalent of the MD, the degree itself is only offered in the United States, according to the American Association of Colleges of Osteopathic Medicine (aacom). DOs should also not be confused with osteopaths (the term used for foreign-trained practitioners who practice osteopathic manipulation) who are not licensed physicians, according to the aacom.

How are MDs and DOs different? The most prevalent difference is philosophy of care. MDs practice an allopathic approach to care, and DOs take an osteopathic approach. An allopathic physician focuses on contemporary, research-based medicine, and often uses medications or surgery to treat and manage symptoms, while an osteopathic doctor focuses on the whole body, with DOs often focusing on preventive care.

This is not to say that MDs cannot, or do not, take a whole body approach. On the contrary, over the last decade there has been a shift in focus to more holistic approaches to care within many allopathic medical schools, as noted by Steven E. Barkan in his book, Health, Illness, and Society, Second Edition.

According to a recent Forbes article, “Will I Limit My Career Path by Pursuing DO instead of MD?” when it comes to specializing, in the United States, MDs tend to gravitate toward specialties that include radiology, neurological surgery, orthopedic surgery, and plastic surgery. Conversely, DOs tend to specialize in family medicine, pathology, physical medicine and rehabilitation, and psychiatry more than other specialties.

This same article points out that residency rates can differ between the two as well, with 91.8% of US allopathic seniors matching in the preferred specialty, and 82.6% of US osteopathic seniors matching in theirs. These numbers were recorded pre-July 2020, when the accreditation councils between the two were separate. Now that both have merged to form a single GME Accreditation system, some predict the competition for residency spots will become even more competitive, with MDs perhaps having the advantage. Of note, Ross University School of Medicine’s (RUSM) first-time residency rate was 95.2% in 2020 for 2019 - 2020 graduates.

The issue of annual salary and who makes more, an MD or a DO, was tackled by Dr. Murtaza Ahmed on his blog, MyHeart.net. According to Dr. Ahmed, the salary difference is related more to the specialties MDs and DOs gravitate to than any actual difference in salary rate. Location also plays a part, he notes, with DOs gravitating to more rural areas, where salaries are typically lower, and MDs gravitating to more urban areas, where salaries are typically higher.

What all of this boils down to is that there is no definitive way to ascertain whether becoming an MD is “better” than becoming a DO – or visa versa. However, because of the deep personal and financial commitment both degrees require, it can be argued that one should pursue the degree that, at the end of the day, he or she will feel proudest of. For many, the simple truth is that only the “MD” will do.

Below are a few key thoughts from RUSM alumni and students:

“With the merging of MD and DO residences, it seems unlikely that DO students would be as competitive in MATCH [National Resident Matching Program® The MATCH℠] applications. As an International Medical Graduate (IMG) MD who will have a three-digit Step score, I’m likely to be just as competitive as a US DO student in the MATCH for certain specialties. If the DO schools are now preparing students for Step exams, it’s hard to say how quickly or thoroughly than can switch gears. I’d have more faith in an institution that has a long history of teaching towards Step, rather than one that has a newly retooled curriculum taught by professors who may have never taken Step. I’ve worked with some great DO doctors, but at the end of the day, I never want to have the ‘I’m a real doctor, too!’ conversation with a patient. The MD recognition goes a long way with patient trust. I’d [also] like to work overseas on medical missions at some point [and] don’t want my credentials to be a hindrance. – Eric Simms, Current RUSM Student, Class of 2023

“Medicine is a universal language. I really liked the fact that MD is internationally recognized, rather than just an exclusive US based degree. Although the playing fields are level, I believe that a stigma exists in society regarding DO. With that said, I feel that being an MD carries slightly more weight in people’s minds not only here at home but throughout the world.” - Ryan Azarkhail, Current Student, Class of 2022

“I would agree that the universal recognition of MD is a huge plus to pursuing an MD over DO. For me, I know without a doubt that I want to go into research, and so that takes precedent.”– Kristin Ezell, Current Student, Class of 2023

“Deciding on whether to pursue an MD or DO degree can be a very difficult decision – definitely a personal one. When I was researching schools and options, I realized that while osteopathic medicine is an important field, it was not the type of medicine I wanted to ultimately pursue. RUSM gave me the chance, the tools, and the resources to earn my MD degree and I could not be happier as I am a practicing hospitalist.” -  Melissa Woo, MD’16, Hospitalist, Cleveland Clinic

“I chose to pursue an MD because I want a degree that is recognized worldwide in case I want to practice overseas in the future.” - Philip Lee, MD ’13, Psychiatrist, Kern Behavioral Health & Recovery Sciences

“From a career standpoint, MDs have less of a barrier to entry into sub-specialties, most importantly in interventional fields where all the minimally invasive innovation is occurring.” - Tejas Shah, MD ’16. Interventional Pain Fellow, Rutgers Robert Wood Johnson Medical School

We’re here to help. While only you can answer this important question, we realize that having all the facts can help in your decision-making process. For more information, or to talk through your options with one of our knowledgeable admission counselors, please reach out to our Office of Admissions directly at 754.707.5547 or [email protected]