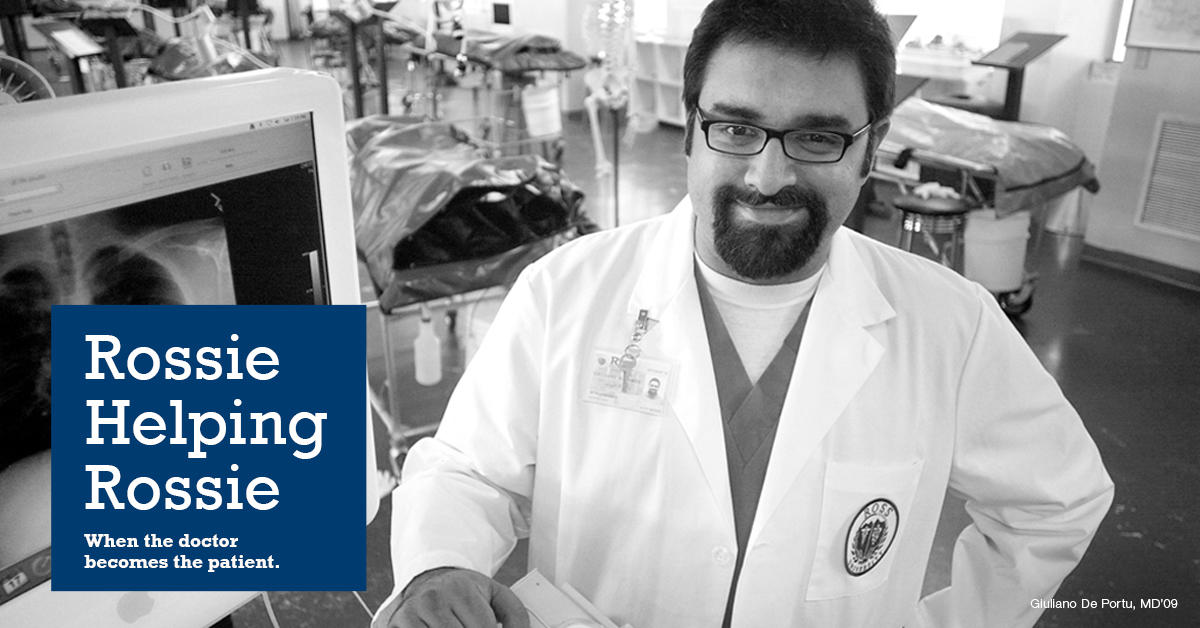 What happens when the doctor becomes the patient? Giuliano De Portu, MD ’09, an Emergency Medicine physician at the University of Florida, found out first hand when he ended up in his hospital’s own Division of Cardiovascular Health with a high-grade atrioventricular block, and subsequently found himself in the skilled hands of another Ross University School of Medicine (RUSM) alumnus.

Dr. De Portu always knew he wanted to become a physician. One of his earliest memories is of going through his grandfather’s Encyclopedia Britannica, which had a section on anatomy with pages that were transparent, allowing him to move around organ systems.

“Growing up, there were no doctors in my family, so there wasn’t any direct exposure. But it was something I always felt a passion for even in high school and college and so on,” he explained.

During college, Dr. De Portu volunteered in a trauma center in San Juan, which was his first exposure to Emergency Medicine.

“I was immediately attracted to the amazing work that was done, and the variety,” he said. “I worked as a photojournalist for the Associated Press and for newspapers in Puerto Rico before medical school, and the cool thing about that was the variety. You could be doing a press conference in the morning, taking a portrait of a chef in the afternoon, and then suddenly you were sent off to a fire. For me, Emergency Medicine was kind of the same.”

Although Dr. De Portu enjoyed great success as a photojournalist, he still dreamed of becoming a physician, and applied to medical schools several times over the years – all to no avail. He eventually found out about RUSM and was accepted into the Medical Education Readiness Program (MERP).

“People thought I was crazy. I was 33 when I started medical school, but I was so happy to have the opportunity,” he said. “I realized when I went to MERP that I had never really known how to study before. MERP gave me the preparation I needed to be successful in medical school.”

“Getting to learn from such passionate teachers made me want to try to emulate them,” he said. “I work with residents and medical students every day. Emergency Medicine is humbling because things change in a matter of minutes. You think a patient has one thing, and then you’re thrown a curveball. I tell my residents to take a deep breath, we’re all human, we’re all tired, but let’s try to figure out why this person is here.”

Dr. De Portu experienced a curveball in his own life when he was at work one day and his heart started behaving strangely.

“I was sitting down and felt a little bit ‘funny,’ which is the worst complaint to get because it could literally be anything,” he said. “I checked my pulse and it was in the 40s but I felt fine, so I kept working. A short time later it happened again, and that was when I said, okay, I’m not going to be a superhero here, and got admitted to the hospital for observation.”

When no other incident occurred overnight, the cardiologist team initially discharged him; however, as he was preparing to leave he underwent a third episode and was told he wasn’t going anywhere.

With his diagnosis came the realization that he would need a pacemaker, which came as quite a shock.

“I remember thinking that morning, no way do I want a pacemaker, and then by that afternoon I’m thinking, oh gosh, I’m getting a pacemaker,” he said.

As the cardiovascular team readied him for his procedure, Dr. De Portu made a mental note of the fact that one of their last names was Ross.

“I didn’t have much time to think about it then, but did make a comment to my wife just remarking on how funny it would be if it turned out that he had gone to Ross as well,” he noted.

While in recovery, Dr. De Portu’s curiosity got the better of him, and he discovered that a fellow “Rossie” had indeed been a part of his care team.

“The last time I saw him before discharge, he came into my room and I said, ‘Well Dr. Ross, I would have brought you a cold Kubuli if I’d known,’ and he immediately laughed and we had a genuine ‘Ross moment.’ If I hadn’t had that journalist mind, I probably would have left and never known.”

As for Steven Ross, MD ‘15, a Cardiology Fellow, he remembers the incident with fondness as well.

“Dr. De Portu definitely surprised me when he told me he wanted to buy me a Kubuli. I thought, how does he know about Kubuli? Then it hit me,” he said. “We started talking about memories from Dominica and the times we had on the island. There is definitely an immediate connection you form with someone when you realize they had some of the same unique experiences as you.”

He continued, “It felt very gratifying to know that I was treating another Ross graduate, and made me especially proud to be a Ross graduate myself knowing the quality of physician Dr. De Portu is.”

As for Dr. De Portu, he felt much the same.

“I had amazing care. Everyone at the University of Florida is very patient-oriented and passionate about their work, so I wasn’t surprised they were taking good care of me. Still, I felt really happy and proud to see another Ross graduate doing great things,” he said. “It was a very ‘full circle’ moment. I’m from Ross and am having an issue, and here is another Ross graduate taking care of me. I felt very emotional about it and thought it was a great thing and great story.” ​