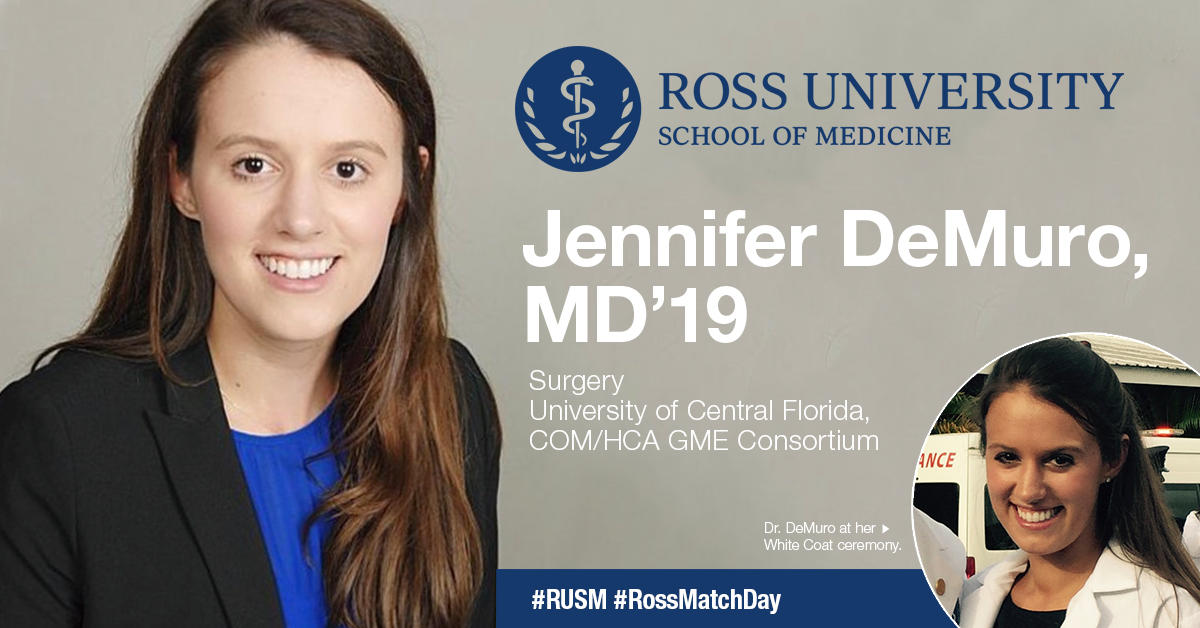 Defined as a driver of achievement and success, “grit” is something DeMuro has in spades – as was evidenced time and again throughout her medical school journey as she faced a devastating cancer diagnosis and other hurdles along the way. Through it all, DeMuro didn’t just persevere – she thrived.

DeMuro’s love of science led her to major in Biology at the University of Connecticut, which in turn led her to begin considering careers of a scientific nature that would also give her a sense of fulfillment. She went on to pursue a graduate degree at Quinnipiac University before worked for a year as a nurse assistant at Hartford Hospital. It was there that she realized that she wanted to become a physician.

“I absolutely loved it, but I’m not the type of person who does something half way,” she said. “I needed to be absolutely sure this was what I wanted to do.”

Having made the decision to go to medical school, DeMuro decided to take the MCAT and got a great score her first try. Wanting to do even better, she took it again – only to score lower due to unforeseen circumstances. Unfortunately, her second score was the one the US medical schools she had applied to took into account, and she was denied entry. Not being content to leave things there, she retook the test again and scored higher than her first try – leaving her with a big decision.

“I knew my score was high enough for me to probably get into a US school, but that would entail waiting another year, which I didn’t want to do. I wanted to start my life,” she said.

DeMuro had heard about RUSM from a lab partner in graduate school, who had actually left half way through the program to go to RUSM.

“Through his experience, that was how I felt comfortable with it. He told me so many things. I decided that was the way I wanted to go,” she explained.

DeMuro arrived at RUSM and immediately threw herself into medical school. She loved the island and was happy to finally be pursuing her dream; however, in the middle of her first semester, she started to get sick.

Thinking she had tonsillitis, DeMuro kept her focus on her studies. A freak incident on a medical mission trip led her to seek care at the RUSM medical clinic, where they noticed that her thyroid was enlarged and prescribed an ultrasound.

After getting the scan done and being told that there was no immediate concern, DeMuro decided to finish the semester and visit her doctor while she was on break.

Once she reached home, DeMuro immediately went to her local doctor, only to have her concerns largely disregarded. Still thinking her chief ailment was tonsillitis, she went next to an Ear, Nose, and Throat (ENT) physician, who recommended their removal. As part of the surgery, a biopsy was performed, but DeMuro felt so much better afterward she was sure the problem had been solved.

The day before she was scheduled to leave for Dominica for her second semester, DeMuro went for a recheck at the ENT.

“I walked in thinking everything was great and they said, we have to talk about your biopsy results,” she said. “It turns out, I had thyroid cancer. I was devastated.”

Still, she was told at the time that there was little reason for concern and that she could return to medical school and have it taken care of at a later time.

“So, that’s what I did,” she said. “Knowing what I know now, I would never have done that. But I wanted to keep going. I loved my life.”

Once she returned to RUSM, she started talking to her professors and fellow students, and quickly realized she needed a second opinion.

As chance would have it, DeMuro’s father had a connection at Yale School of Medicine who was a thyroid specialist, and when he read her scans, he was very concerned.

“He told me the cancer had been growing for about seven years,” she said. “It needed to be taken care of immediately.”

Still not wanting to interrupt her studies any more than necessary, DeMuro asked if they could remove the cancer and she could return to medical school within a two-week timeframe.

“I was told it was possible, so that was the plan,” she said.

Before she left, DeMuro “studied her butt off” for her exams, and ended up taking one of the top spots in the class for the semester.

Unfortunately, surgery revealed that the cancer had metastasized extensively, so her two-week leave of absence ended up being an entire semester.

“It was rough, but I was determined to keep up with my studies,” she said. “Studying was the only thing I could hold onto. I watched all the lectures and my mom would quiz me in my hospital bed. I needed to keep my mind off things and keep moving forward.”

Through it all, the support RUSM provided was “amazing,” DeMuro noted.

“I don’t know if I ever got to thank them enough, but everyone at Ross was so wonderful at getting me through it. Ross really took care of me,” she said.

Upon her return, DeMuro again threw herself into her work – but it wasn’t easy.

“I was focused on finishing,” she said. “Semesters two to four, I received honors every semester and was president of Phi Delta Epsilon. I was so thankful and happy that I was alive and could do this.”

Still, all that work took its toll and by the time she arrived home she needed to take another short break before taking Step 1. Needing to address some financial concerns as well, DeMuro began bar tending again, which had helped her pay for schooling in the past.

“I always worked two or three jobs, so this was no different,” she said. “I had customers quizzing me at the bar. People were so supportive.”

By the time her clinical training started, DeMuro had a clean bill of health. She also had an amazing Step score.

“I overcame and did great and went on to my clinicals, and that’s when I started becoming interested in surgery,” she said. “Even though I was healthy, there was a comfort level in being close to home and Yale, and RUSM came through again and helped me secure my rotations in Connecticut.”

When asked what it was about surgery that attracted her to it, DeMuro was quick to point out that she likes to be hands-on and active.

“I love the technical aspects of surgery that I can master, and the fact that I can make a direct impact on someone’s life,” she said. “I want to be a different kind of surgeon. After what I experienced – it was hard – no one ever asked how I was feeling. At medical school, I loved being able to explain things to my patients and see if they were anxious and address their concerns. If I can give one thing back, I want to be able to make the healthcare experience better for other people because I know what it’s like, and I think the system can be improved.”

In the end, DeMuro’s grit and tenacity paid off. She received 23 categorical surgery interviews and went on 20 of them.

“Everyone kept telling me to have a backup plan, but I didn’t really think I needed one,” she said. “Still, I was nervous.”

When she received the news that she had matched in Surgery at the University of Central Florida, COM/HCA GME Consortium, she could hardly believe it.

“I don’t know how they do it, but they really do seem to match you where you need to be,” she said.

Because of all she’s been through, DeMuro noted that she doesn’t like to look too far ahead, but she is “super excited” to begin residency.

“I’m going to be the one making the decisions and changing my patients’ outcomes, and also doing surgery, so I’m really excited about all of that,” she said. “Being able to put everything I learned as a medical student into action is going to be amazing.”

She continued, “RUSM gave me a chance not only to pursue my dream but also to go get better and come back, and it means everything. My future is finally here, and it feels great.”