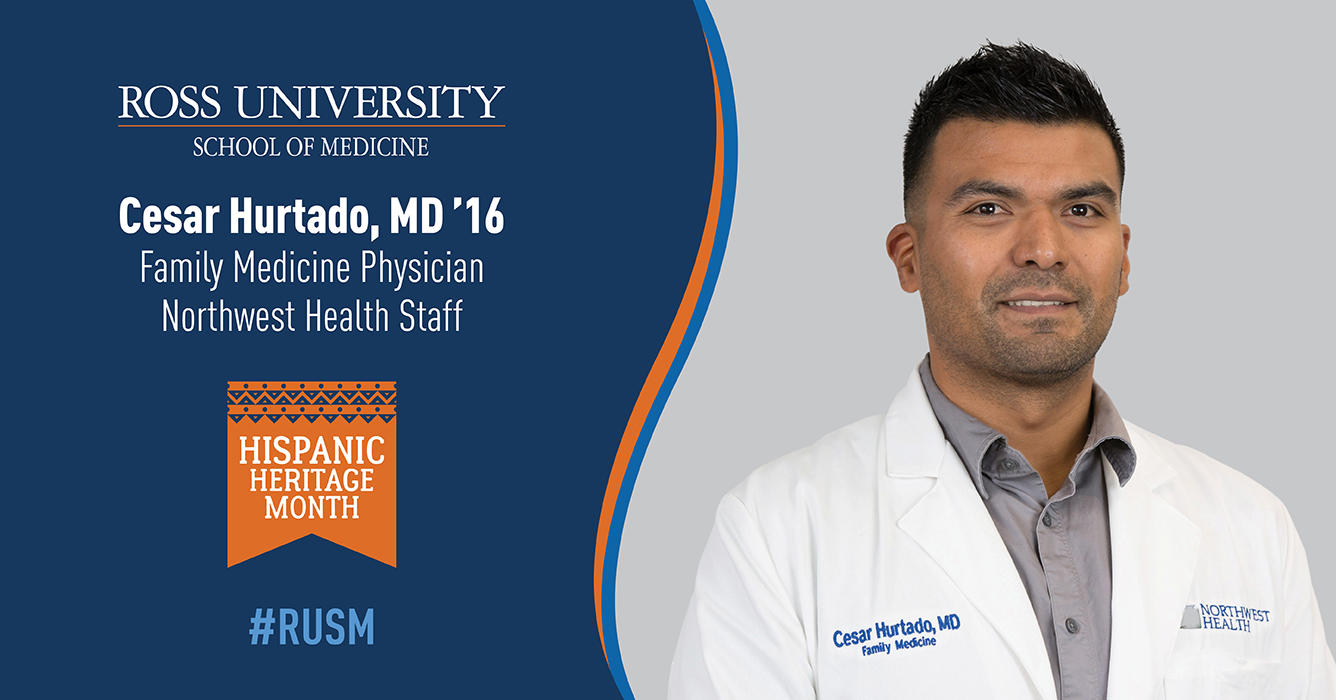 Ross University School of Medicine (RUSM) joins the nation in paying tribute to the generations of Hispanic Americans who have positively influenced and enriched our country, and would specifically like to recognize Latinos’ growing impact on science and medicine. Over the last 40+ years, it has been our privilege to have graduated many Latino physicians, including Cesar Hurtado MD ’16, whose perseverance and determination helped turn his dream of becoming a physician into reality.

Hurtado found his way to becoming a physician through his work as an emergency medical technician (EMT) both before and during college. After working in a factory for a short time, Hurtado was looking for a position that would be both fulfilling and interesting and decided to see what being an EMT was all about. He found what he was looking for, and so much more.

Wanting even more, Hurtado decided to go back to school at the University of Arkansas, where he majored in Health Sciences with the goal of graduating and going on to medical school. Upon graduation, however, he met a roadblock when his MCAT score led to his being denied entry to U.S. medical schools twice. However, that was when he remembered a Ross admission representative who had visited the University of Arkansas and told him about RUSM.

“It was a good thing I knew about Ross because they took my whole background into consideration,” he said. “I applied, and in a few weeks was invited for an interview and was accepted about a week after that. Because they take three classes a year, as opposed to one, it was a pretty fast process.”

Hurtado noted that it was a bit frightening at first to leave his family and home and go to an island he had never heard of, but he would not let anything dissuade him from reaching his goal. And while medical school and being a husband and father of young children was nothing short of a juggling act at times there was, he felt, no other choice for him but forward.

“I had the support of my family, and I knew I had to do this for the kids,” he said. “My family is very important to me.”

Hurtado grew up in a very close family, and although things were difficult at times, he had a happy, protected childhood – which, he noted, may seem strange given his circumstances at times.

“I came across the border as an undocumented immigrant when I was very young and don’t remember much about it,” he explained. “We went back to Mexico and returned a few more times before our legal status became final, but what I remember most is that I was with my family. I didn’t realize what a precarious situation we were in at times, but looking back, it was probably motivation from those experiences that got me where I am today as well.”

Once acclimated, Hurtado described his experience at RUSM as “life changing.”

“The work was, of course, challenging, but that was to be expected. The times I found to be the most memorable were actually the times when I wasn’t studying,” he joked. “I was actually a breakdancer in my past and after my first semester I started practicing again and by the end of my fourth semester I had a little crew going. We even did a show for a talent contest, which was pretty amazing.”

Given his background as a paramedic, Hurtado went into medical school thinking he would specialize in Emergency Services; to his surprise, however, his Family Medicine rotation made him rethink his trajectory.

“I fell in love with Family Medicine,” he said. “There is something about being able to follow patients throughout their lifetime that really resonated with me. Plus, I am a father of three children and after eight years of schooling and residency, I needed to find a way to balance my family with my work. I found that in Family Medicine.”

Having recently completed his residency in Family Medicine at the University of Arkansas, Hurtado is now a Family Medicine Practitioner at Northwest Health in Springdale. While new to the practice, he already finds the work rewarding.

“I’ve been here for almost two months and have a few patients who I’ve seen a couple of times and it feels great to be able to get to know them a little bit better and focus beyond the medical part of it. You begin to pick up on other things that help you get to know them as people, and not just patients.”

Hurtado also keenly understands his position as a role model for Hispanic children who aspire to become physicians one day as well.

“I’ve been called to speak to high school and college students and tell them about my journey, and I feel it’s important for them to see that an undocumented kid from Mexico can become a doctor. It’s motivating, and I’ve heard that some of them are actually following my example,” he said. “I tell them to have no fear. If they really want to become a physician and make something better of themselves to follow their dream and don’t let people steer you away or fear of money or leaving family steer you away from achieving something you want to achieve.”