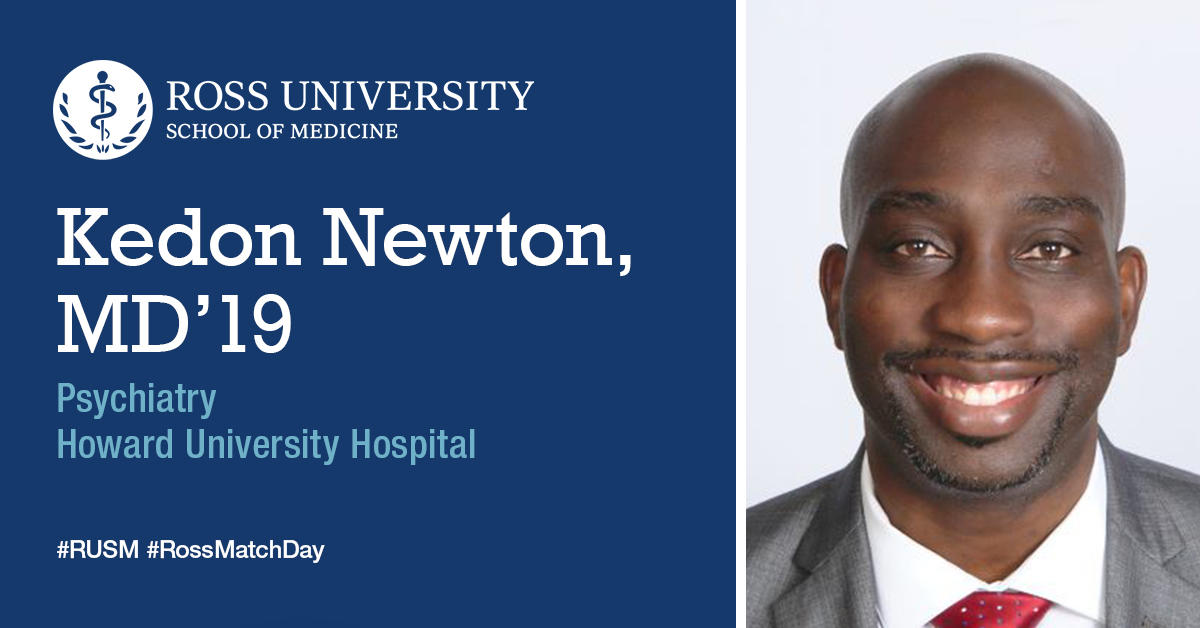 A naturally curious person, Kedon Newton, MD ’19, decided to pursue medicine at an early age as a way to marry up his two greatest passions – science and public service

“I realized that I liked science and the challenge of it, but I wasn’t absolutely sure what path I was going to take at first,” he said. “I wasn’t sure if I was going to be a doctor, a scientist, or an astronaut. But I also really liked serving, and what better way to marry the two?”

Newton grew up in Jamaica and Toronto and is no stranger to new experiences. Having decided to become a physician by the time he was 17, he actually moved to the US because he thought it would increase his chances of getting into medical school, but quickly discovered that wasn’t exactly the case.

“I went to undergrad at Oakwood University, and then went on to get my MBA in Healthcare Administration from Loma Linda University. From there I applied to medical school [in the US], but was having challenges more so from immigration because I was actually considered a foreign student at the time. I was between a rock and a hard place.”

Undeterred from his dream but needing to take some time to figure things out, Newton took a position with Accenture, a management and technology consulting firm in Toronto, before moving on to work with and joining the board of the BBPA, a nonprofit organization. He officially moved to the US full-time in 2014, and matriculated to Ross University School of Medicine (RUSM) in 2015.

“I had some friends from my undergraduate years who had gone to RUSM and were in residency,” he said. “Through everything, I always kept my faith in the Most High, [and] my MCAT score current, and that, along with the fact that I’d gone through graduate school, helped me get into RUSM.”

Given his upbringing in Jamaica and his years as a student and professional, Newton adapted to life in Dominica, and medical school, quickly.

“I was a mature student and lived in Jamaica till I was 12, so I enjoyed [Dominica]. It is a beautiful country filled with beautiful people. I also understood that it is really on you to do what you need to do to succeed. RUSM will provide the tools, framework, and support, but the rest is going to be self-directed. RUSM students are self-motivated, resilient, and resourceful.”

Having decided to pursue Psychiatry, when it came time for Newton to enter the National Resident Matching Program® The MATCH℠, he decided to approach it very strategically.

“I’m passionate about mental health and helping reduce the stigma associated with mental health issues, but as I was going through the MATCH, I quickly learned that Psychiatry had become extremely competitive, so I applied very strategically. I did my homework, pared the list down, applied to about 75 or 80 programs, and had all but one of my five interviews in Psychiatry.”

Newton matched at what he described as his top choice – Howard University –though he admitted that all of the programs he interviewed at were top notch.

“When I got the email I’d matched [at Howard], it was a surreal feeling that is kind of hard to describe,” he said. “I was just really happy and fulfilled in that moment.”

When asked what he is most looking forward to as a resident, Newton responded,

“I’m happy that I’m going to be able to serve my community in a way that I think is really meaningful. I came into medicine to serve, and I want to be able to be a part of the change for this patient population that I feel exists relatively in the shadows. There are so many stigmas associated with psychiatric disorders. I’m excited to be a part of breaking down those stigmas.”

For Newton, having finally achieved his dream of becoming a doctor has been a “truly humbling experience.”

“Recognizing that it’s now my turn to give back is more humbling than anything else,” he said. “RUSM was the pathway to achieving my dream.”