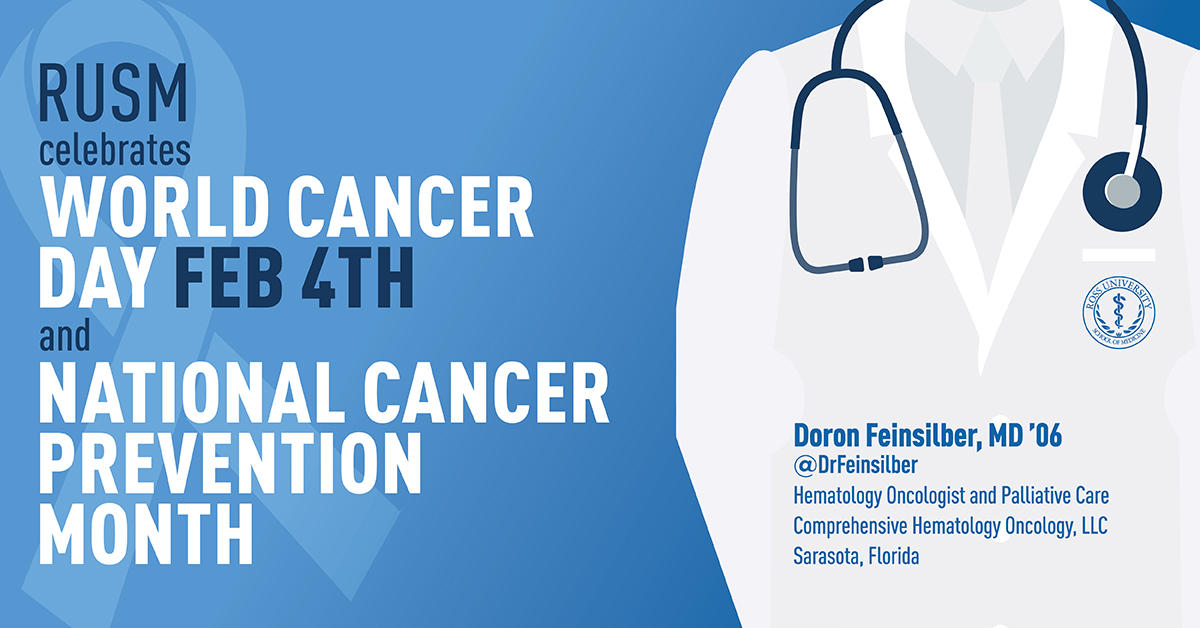 RUSM Support World Cancer Day 2020: I Am and I Will

Every year, World Cancer Day aims to save millions of preventable deaths by raising awareness about cancer. Ross University School of Medicine (RUSM) joins the global campaign to support the Union for International Cancer Control (UICC) and its continuing efforts to boost public health awareness and action against cancer.

Clinical development of targeted and immune-based anti-cancer therapies have put us in a better position than ever before to fight this ongoing battle, according to Doron Feinsilber, MD ’06, a medical oncologist in southwestern Florida.

“These breakthroughs give us new reason to hope,” said Feinsilber, who recently completed his fellowship training at the Medical College of Wisconsin Froedert Cancer Center. “I’m excited about the possibilities these new therapies provide that hopefully will make treating cancer a lot easier.”

An avid contributor to medical cancer research, Feinsilber had the good fortune to work with Daniel Von Hoff, MD, FACP, a longtime giant of cancer care, shortly after graduating from RUSM.

“He was the person who really solidified my decision to go into oncology,” Feinsilber explained.

It was during Feinsilber’s time at the University of Illinois College of Medicine in Chicago as a PhD student that the idea to become a physician first took root. While he enjoyed the program on an academic level, it left him with a desire to see the direct efforts of his work in real life.

“I enjoyed the physiology and biochemistry and genetics that was involved in the science, but was frustrated because I couldn’t see how it translated onto another person,” he explained.

About this time, he started to become acutely aware of the presence of the medical residents he would see each day on his lunch break at the student union.

“It was almost like a little tease,” he said. “I’d see them literally every day, and eventually I started thinking that there was no reason why I couldn’t be one of them.”

The flame to become a physician fully lit, Feinsilber sought entry into ICM’s MD/PhD program, but was waitlisted. About the same time, he learned about RUSM from a college friend and decided to look into it. Liking what he discovered, he applied and was accepted to the following May term.

“It was perfect timing because May was about the time when I would have had to start my qualifying exams for my PhD program, and at that point it would have been harder to leave. As it was, I made the decision to go to Ross and it was the best decision I ever made,” he said.

For Feinsilber, going to RUSM was a learning experience on many different levels.

“I really grew as a person,” he said. “RUSM was the conduit for me to do everything I wanted to put my mind to.”

While Feinsilber was more than up for the challenge of medical school on an academic level, he noted that he had a few lessons to learn in other areas.

“I don’t think there’s any one person who goes through medical school without finding out that they have both strong and weak points,” he explained. “Discovering those weak points was actually good for me and my development. The entire experience allowed me to become more human - it humbled me.”

After completing the basic science portion of his medical school education, Feinsilber found himself back at UIT-affiliated Mercy Hospital & Medical Center, where he completed the majority of his clinical rotations.

“If anything it was just like I was in the MD/PhD program at UIT,” he said. “I felt like I’d gone full circle.”

After graduating from RUSM, Feinsilber obtained a preliminary Internal Medicine position at the Jewish Hospital of Cincinnati. It was through that opportunity that he secured a PGY-2 categorical position through the Johns Hopkins-affiliated Greater Baltimore Medical Center.

After the completion of his residency, Feinsilber worked first at JFK Medical Center in Atlantis, Fla, before taking a hospitalist position in Arizona, where he volunteered to work at Translational Genomics and subsequently found himself working with none other than Dr. Von Hoff himself.

“Every major chemotherapy drug that’s come out in the last 24 years has been because of Dr. Von Hoff,” he said.

Feinsilber then took a faculty position at the medical college of Wisconsin Froedert Cancer Center as an oncology hospitalist, where he fine tuned his clinical and research skills and subsequently completed his Medical Oncology fellowship.

Currently a partner track associate at Comprehensive Hematology/Oncology, LLC, where he is the site clinical director for the new office branches in Fort Myers and Sarasota, Feinsilber has a keen interest in phase 1 clinical trials and has hospital consultative privileges at Lee Health, Venice Regional, and Doctors Hospital of Sarasota.

“In a very creative way, it all ended up working out,” he said. “I went from all that to becoming a full medical oncologist, and I couldn’t be happier.”

He continued, “RUSM has been such a great part of this journey, one that I’ll always be thankful for.”