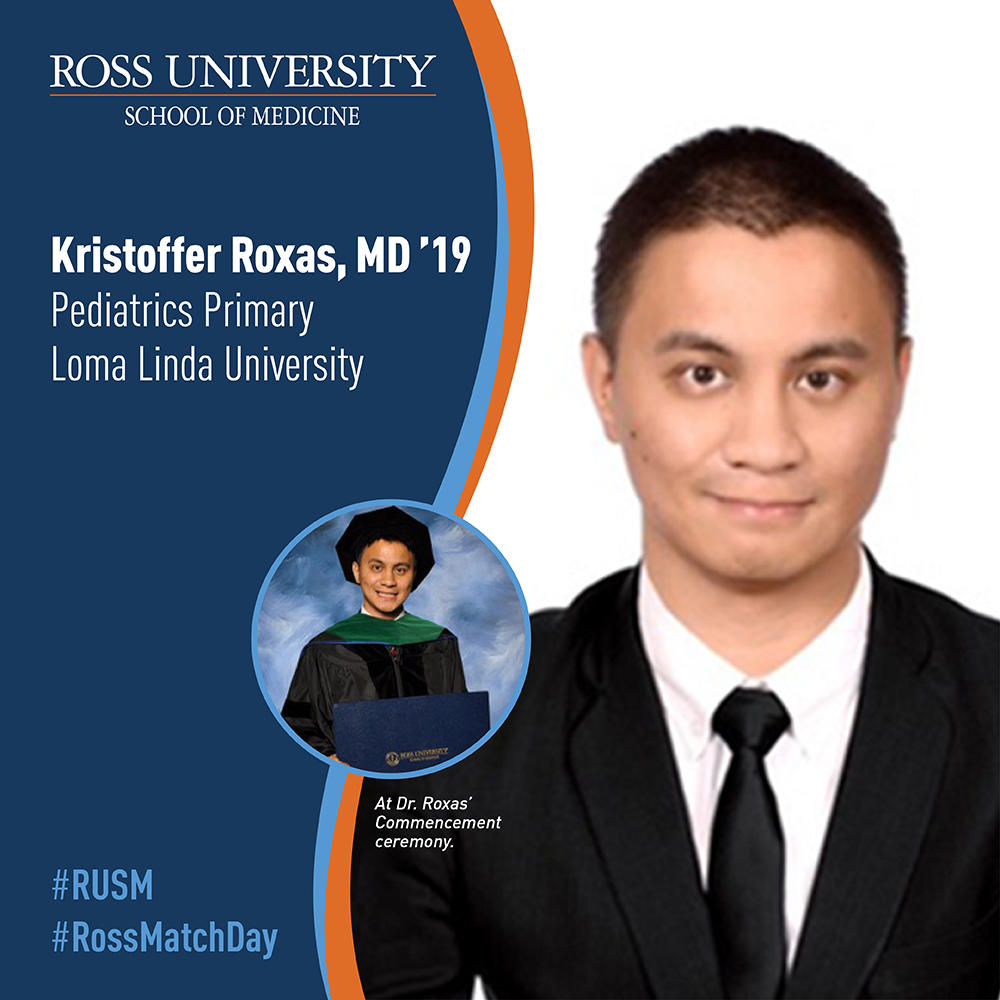 Fresh from graduating with his medical degree from Ross University School of Medicine (RUSM) and about to begin residency at his first choice hospital in Southern California, Kristoffer Roxas, MD ’19, feels “prepared for anything!”

Born in the Phillipines, Kristoffer immigrated to the United States when he was 13 and was inspired to become a physician as a result of that experience.

“I decided to become a physician to put myself in a position to help the sick and vulnerable,” he said. “My life was impacted by the kindness my family received upon immigrating to the United States, and I promised myself that I would acquire the knowledge and skills to help those in need when my time came.”

“Their motto is ‘To Make Man Whole,’ and I believe in holistic medicine and making sure that you address every aspect of the patient – not just physically and medically, but emotionally as well,” he explained. “Also, fate is important to me and Loma Linda encourages you to pray for patients and address their spiritual needs, so it’s a very holistic approach and their values are centered on faith and serving people, which is something that speaks to me as well.”

When the email announcing his residency placement location was sent, Kristoffer was en route to Thailand and didn’t learn the news for nearly 24 hours.

“I wanted to be in a beautiful place when I heard the news and was in the airport when the email came and I stopped myself from reading it,” he said. “I had to wait almost an entire day, which was very, very difficult, but I wanted to share the news with my family as well, so I Skyped with them and we opened the email together. It was my first choice and I worked hard to be able to match in that program.”

Specializing in Pediatrics, Kristoffer hopes to be able to make an impact on his patients’ lives from an early age.

“Physicians have the privilege of making a lasting impact in [their] patients’ lives, so why not start at a young age?” he said. “And contrary to popular belief, children are some of the most grateful and cooperative patients I’ve had the pleasure of working with. I’m also looking forward for the chance to inspire at least one child to become a great doctor!”

Kristoffer noted that he will be beginning his medical career with both hunger and humility.

“Humility is important to have in any stage of medicine, even as a resident or attending,” he explained. “Once you enter the field with that, it’s easier to become a team player, to take criticism, to learn, and to be open to being part of a group. I think humility played a big part in the tools that RUSM gave me, and also hunger because we would always have to prove ourselves as international students, so that hunger to work the hardest, to be excellent, [and] to prove yourself to others. These things are very important and useful in medicine.”

Forever thankful for being given the chance to follow his calling, Kristoffer said, “There are so many students with a dream to become a doctor, and if that’s your passion, then what RUSM does is give you the opportunity. That is something I’m always going to be thankful for to RUSM, for giving me that chance to prove myself – not just to others, but to myself as well. You really have to believe in yourself and your training and your story and go for it.”