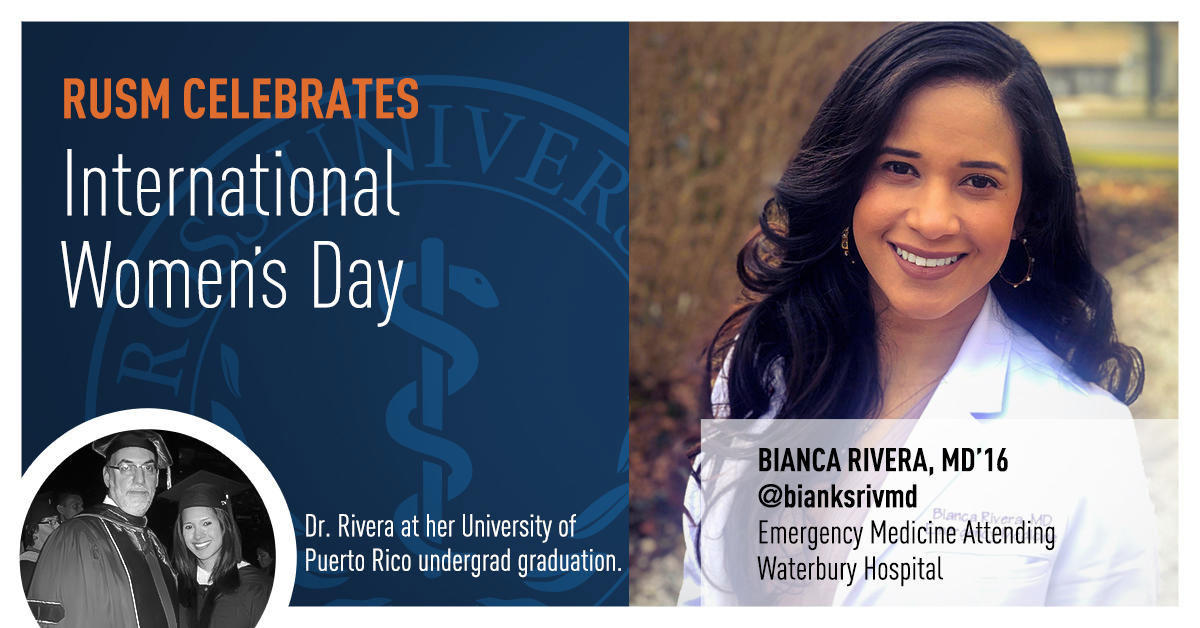 Born in Queens, NY, Ross University School of Medicine (RUSM) alumna Bianca Rivera, MD ‘16, moved with her family to her parent’s native home of Puerto Rico when she was in the fifth grade. An avid scholar with a love for the sciences, Rivera didn’t decide to become a physician until college when a phone call caused her to rethink her plans for the future.

“My mother was an OBGYN, and as I was growing up she spent long hours in the hospital and was on-call most of the time, so I didn’t know if being a physician was right for me,” she explained.

She was studying cellular molecular biology at the University of Puerto Rico when her sister called to ask what she knew about a rare autoimmune disorder called Henoch-Schönlein purpura, which her niece had just been diagnosed with.

“She asked me if I knew anything about it and I definitely didn’t know anything, I was just taking my biology class and learning how to dissect frogs, so I was researching online and felt very helpless and didn’t know what other advice to give her. And since I did feel so helpless, it inspired me to go into medicine,” she said.

Having made the decision to go to medical school, Rivera began sending out applications to schools in Puerto Rico, but was waitlisted. Frustrated, she turned to her mother for advice, who suggested she take a look at RUSM.

“She completed her residency and was an attending in New York at Jamaica Hospital Medical Center and had many RUSM students under her wing and was impressed with how they executed their rotations and how well they knew their material,” she said.

Rivera did apply and flew to Miami for an interview. She received her acceptance a short time afterward and decided to leave her friends and family behind for the first time and attend.

“At first, it was bittersweet. It was nice because it was a new journey, but I was sad because I was leaving my family behind. But Dominica reminded me so much of Puerto Rico, so I liked that about it, and I immersed myself in it and found my friends and study groups,” she explained. “I loved it because it was its own melting pot. Even though I’m from New York and that’s a melting pot on its own, it was definitely something completely different at RUSM. It was interesting to get to learn about different cultures and customs I wasn’t aware of.”

Unsure of which area of medicine to specialize in, Rivera ended up taking her elective rotations ahead of her cores and found a perfect fit in Emergency Medicine (EM).

“Emergency Medicine is amazing!” she said. “[It] was my first elective rotation and I was like, ‘Oh my goodness, I’m going to have to help resuscitate people and do compressions, I don’t know if I know what I’m doing!’ but I absolutely loved it. For me, Emergency Medicine was very similar to my personality – I’m bubbly and I like to get things done quickly and I like the fast pace and the fact that I see the patient, stabilize them, and disposition them accordingly. I went through every other rotation just to make sure, but nothing else compared to it at all.”

A highly competitive specialty, Rivera was thrilled to find out that she had matched at the University of Puerto Rico.

“I wanted to come back to [my parents],” she said. “It was good being away from them for four years to immerse myself in something completely new, but I needed to come back because that’s where my heart was.”

As a resident, Rivera was told by her attendings that they admired her “go-getter attitude,” which is something she credits RUSM for.

“RUSM helped me to be perseverant and to work hard for my dreams, and that helped me in residency. RUSM helped me be very strong and resilient as well because medical school is not easy, but RUSM gave me the appropriate tools for me to be a strong leader, especially a strong female leader in a community such as Emergency Medicine,” she said.

Being a strong Hispanic female leader is very important to Rivera, who notes that it is an honor to be able to set an example for the next generation of Hispanic female physicians, just as her mentors did for her.

“When I was doing my [EM] elective rotation, my attending physician – who is female and Cuban – sat me and one other female medical student down and said, this is a world where you really have to make a name for yourself as a Hispanic woman, and she helped me stick up for myself and speak for myself. She, along with other female mentors I had in residency, inspired me to be the strong female leader I am today. If it weren’t for them, I wouldn’t be here.”

In keeping with this, Rivera is excited about RUSM’s developing HSI partnernships, which will allow more aspiring Hispanic students to follow their dreams of becoming physicians.

“I think it’s very positive, especially for Hispanic potential medical students going into the Ross University [School of Medicine] system,” she said. “For there to be an organization helping Hispanic students get accustomed to medical school, I think that’s very positive. And it helps those students who can get homesick not be so homesick because you have people just like you who are around and who you can hang out with.”

She noted that it helped her tremendously to find other Hispanic students at RUSM, saying:

“When I was able to find students who were just like me, that were female, Latina, [and] away from their parents – those times hold a special place in my heart. We were able to bond over that, away from our comfort zone.”

Having just completed her EM residency, Rivera is excited to begin the next chapter of her medical career as an attending Emergency Physician at Waterbury Hospital in Connecticut. She hopes to be the director of an emergency room someday, and had this advice for anyone who is dreaming of becoming a physician:

“It’s not an easy path and no matter what obstacles come your way, stick through it and fight through it as your perseverance and discipline will be your best ally to attain your goals.”