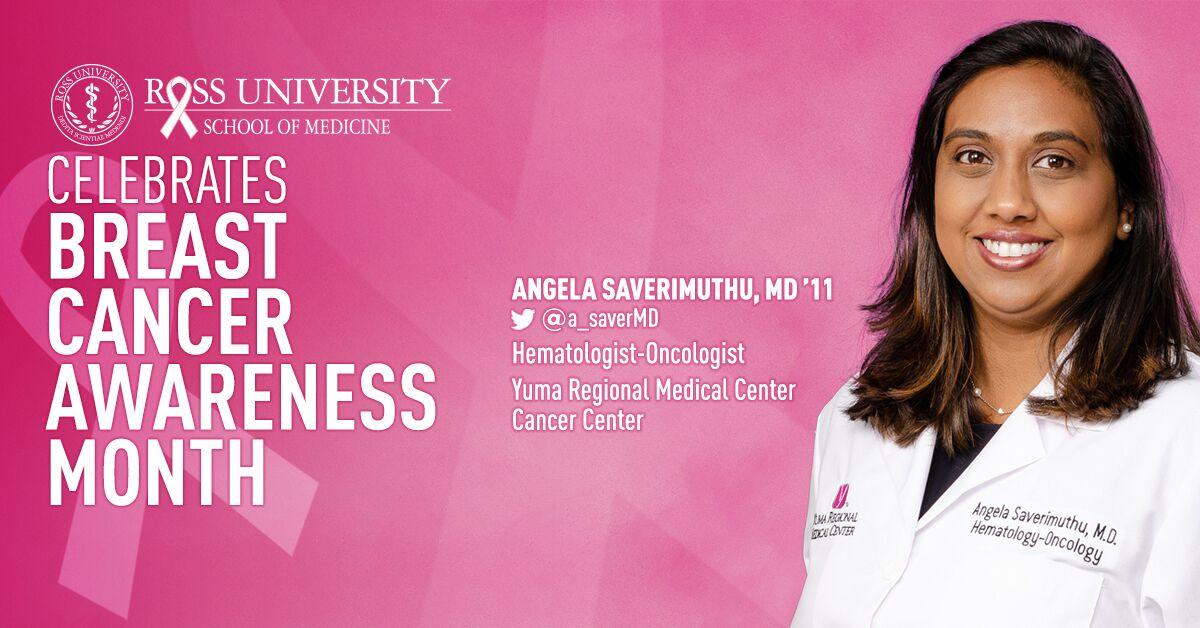 In recognition of national Breast Cancer Awareness Month, Ross University School of Medicine (RUSM) is joining the medical community in helping to raise awareness about this prevalent disease and the importance of early detection through mammography, which is the best tool we have to find breast cancers, according to RUSM alumna Angela Saverimuthu ’11, a breast cancer specialist at Yuma Regional Medical Cancer Center in Yuma, AZ.

“Breast cancer is common – it affects one in eight women – and screening awareness is so important because if we can detect the disease early, we have a much better chance of making patients disease free versus catching it at a more advanced stage,” she said. October is an important month also because it brings more awareness to those with the disease, and the need for continued research to find a cure, she noted.

A native Canadian, Saverimuthu’s desire to become a physician stemmed from a need to help people in a very tangible way. She studied biochemistry at Concordia University in Montreal and applied to Canadian medical schools after graduating. When she didn’t get in, a friend – who was a student at RUSM at the time – encouraged her to apply.

“The competition in Canada was very great and it was discouraging,” she explained. “At one point, I thought that I wasn’t going to be a doctor and then when my friend went to Ross it reopened the possibility of becoming a physician. It was an amazing opportunity to let me achieve my dream of becoming a doctor.”

She noted that the memory which stands out the most from her time at RUSM was arriving on the island with a bus of fellow students who quickly became some of her best friends while at medical school, and who continue to be good friends to this day.

“It was challenging, but character building,” she recalled. “It was the first time I was living on my own, and in a different country, so it was definitely a culture shock, but despite those things I pushed through and that is something that definitely came from my time at Ross: finding a way to persevere and overcome obstacles no matter what.”

Saverimuthu actually went to RUSM with the intent of becoming an OBGYN, but found herself gravitating toward hematology/oncology even before she began her clinicals.

“My professors made learning about chemotherapy and the pathophysiology of cancer so interesting it started to pique my interest,” she explained. “I ended up taking a hematology/oncology elective early in my third year at Maimonides [Medical Center] to see if I would enjoy it, and the doctors I rotated with were so knowledgeable and their decisions made such a critical impact on the patients that it drew me toward the field. So much so that I decided to shift gears and pursue hematology/oncology instead.”

After graduating from RUSM, Saverimuthu continued her medical journey at Maimonides Medical Center, first as an Internal Medicine resident, and then as a Hematology and Medical Oncology fellow.

“It was a really positive experience overall. Even though Brooklyn is huge and Maimonides has over 700 beds, by the end of my training I felt like it was really small because I knew everyone who worked there and we were a family,” she said. “The community that Maimonides serves is very diverse, which led to seeing a lot of different pathology and really interesting cases. My transition to residency at Maimonides was pretty easy because I had done my clinical rotations at Ross in all five boroughs of New York, so I got to see how it was treating people of different socioeconomic and ethnic backgrounds, which really helped.”

At Maimonides, Saverimuthu met several key individuals who, she says, were instrumental in helping her succeed and who taught her strong leadership skills that contributed to her being chosen as Chief Fellow.

“I never thought I’d end up on the West Coast, but I’m really liking it,” she said, explaining that one of her mentors from Maimonides whom she met during her RUSM rotations actually reached out to her about the opportunity in Arizona.

“I had visited Arizona on vacation with my family and fell in love with the state because it is beautiful and the people are really nice, so I decided to come and check it out as a potential place to practice. We have this saying that the people here are as warm as the weather, and it’s so true. I was ready to try something different and I would be working with someone who I trusted and knew from before so it just made sense.”

She continued, “Perseverance is what got me here because there were a lot of peaks and valleys, but because I wanted to attain this end goal, I persisted. It’s really rewarding seeing patients and making medical decisions on my own. Ross gave me an opportunity I couldn’t get anywhere else.”