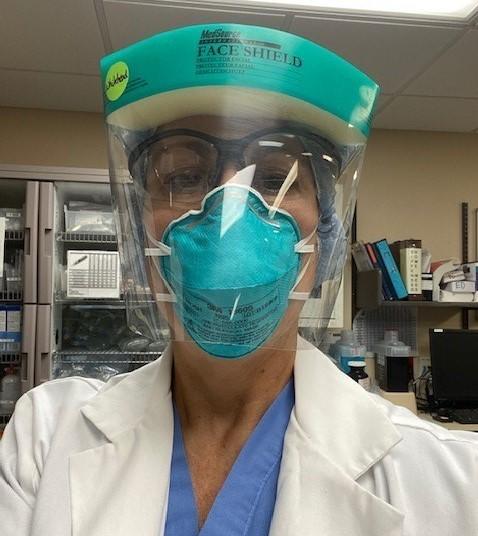 She’s half of a two-physician household on a medical mission to care for others. Every month, Ross University School of Medicine (RUSM) alumna Kathrine Jebian Whitehead, MD, and her husband leave their eight children in Georgia and drive seven hours to southern Illinois to work 10-12 shifts in the emergency room (ER), just like they always have. But now, they leave with tears in their eyes, not knowing if COVID-19 will strike harm to their well-intentioned medical efforts.

“Medicine is like missionary work except we were chosen to work in southern Illinois rather than Africa—we see it as a noble field, one stop behind a priest or a nun because we are truly taking care of people.” Kathrine said she appreciates sharing her work life with her husband and is grateful they are only away for one-third of each month. “It helps that we both go together and work at the same time. But when we pull away and are driving, we cry because it’s worrisome that something could happen to us. We still have kids to raise and watch grow up.”

Over the last two decades, the couple has mastered the work/home juggling act, relying on help from family members and a team of nannies. The separation has taught the children independence and how to be self-sufficient plus they’ve all exceled academically. “We have great students with many valedictorians.” And, besides the oldest who’s interested in film, their children plan to follow in their healthcare footsteps, with one daughter now studying for her medical college admission test (MCAT) and hoping to attend Ross Med.

The Whitehead children range in age from 10 to 23 years old, the first of which arrived shortly after graduation. “We have four boys and four girls—they all have a dance partner.” Kathrine matched in preliminary surgery in Hawaii but her husband landed residency in Connecticut so she declined her spot and took five years off. They welcomed five children in just shy of five years and decided surgery was not the right path for a large family.

“For women, it’s hard to find a balance between family and medicine.” So they both entered the world of family medicine and found it allowed them the flexibility they needed. “People can have a large family this way and still do what they were called to do medically.”

In 2004 with five children in tow, the Whiteheads accepted jobs vacated by a husband-wife ER team in Georgia and fell in love with the new community. But when it was time for their oldest to enter ninth grade and there wasn’t a Catholic high school nearby, the couple planned to move and began interviewing for jobs in neighboring states. They both landed positions with the same practice near St. Louis but ultimately decided to keep the family rooted in Georgia; thus, beginning the Whitehead commute. “At home, we’re just parents. We work or we parent but we don’t do both at the same place.”

Credit must be given to the Whitehead parents when it comes to rotating their shifts around their children’s sporting schedules. “Most times, you don’t see both parents at an event, let along full-time physicians and full-time parents. Our schedule allows us to be super parents and do both.”

Though the children participate in many sports, one daughter has led the pack in the parents’ schedule adjustment—their seven-sport athlete who was team captain and a starter in cheerleading, volleyball, cross country, basketball, competitive cheer, track and soccer plus valedictorian of her class. “The coaches knew they needed her so they could continue to come in 1st and 2nd place. We truly rotated our schedule around her.”

And now it seems, the children are taking a page out of their parents’ playbook. With the pandemic putting a pause in school schedules and causing nannies to stay homebound, the five college students returned from the University of Georgia and now spearhead Camp Whitehead— “the college kids are taking care of the schooling for the younger kids, dressing them in uniforms, giving them PE time by walking around the neighborhood and conducting spiritual time.”

Kathrine said though current times are uncertain, she’s grateful for the downtime. “It seems less stressful because we were probably overextending ourselves with schedules before so now we get a break and can concentrate on the positive side of all this—spending time with the kids and becoming so much closer.”

She credits her experiences at Ross Med for helping her through the current pandemic. “We saw some rare things there and it gave me a different perspective. Ross Med was the best of both worlds—hospital time and training. I felt if people were willing to go to Dominica for their education, they were definitely committed to medicine. There’s a different feel to it—we didn’t have Target around the corner in a third-world country. You had to go for groceries once a week. It was a great foundation and has prepared me for what’s happening now. I’m very proud of where I came from and for the friends I made there—it’s a strong bond. You become a Ross family.”

Now Kathrine spends her on-call days caring for other people’s families. “I have a high respect for this virus. It doesn’t act like the flu, it’s very contagious and it presents in lots of ways. It’s like Russian roulette—you don’t know if you’re the one who will just have body aches or the one who goes downhill.”

Working with COVID-positive patients has forced Kathrine and her husband to have serious conversations with their children about their wills and how to pay bills if they become infected. “It makes you very aware of how easy life was pre-coronavirus,” Kathrine said, describing the extra precautions they take when they return home such as leaving their bagged clothing in the car for three days before laundering. “It’s scary because there’s both of us leaving our kids each time and they’re not little but they still need us.”

When asked about the near future, Kathrine admitted, “I don’t know how we transition out of this. It’s like life before 9/11 and after 9/11. We fly differently now than we did before. Shaking hands and hugs are pre-COVID. Masks may be the way to go now. But we keep moving on. We leave our families to do what we feel we’ve been called to do. We’re not heroes. We’re doing our job. This is why we went into medicine—to take care of people.”

Alumni
, COVID-19
, Wall of Gratitude
, and Care for Caregivers