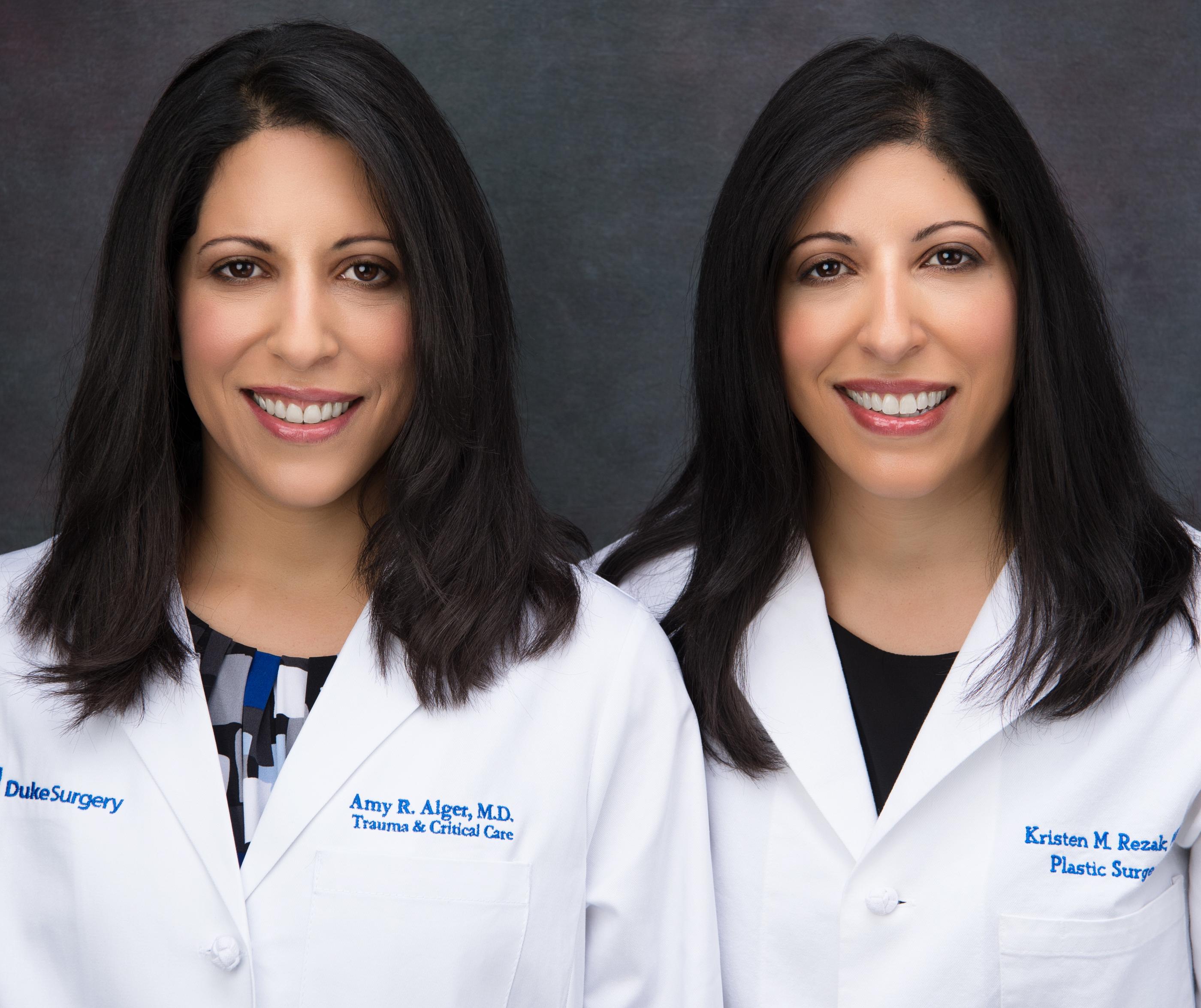 Growing up in upstate New York, the Rezak sisters were always fascinated by the human body. While most kids were watching cartoons, the sisters watched live surgeries. Observing their aunt receive a kidney transplant, continually battle kidney disease and ultimately cancer, that struck a deep chord with the sisters and they decided to pursue a career in medicine to help patients like their aunt.

After graduating from SUNY Binghamton with a B.S. in Biology, Dr. Kristen Rezak considered completing a post-baccalaureate program to complete a Master's in a single year before entering medical school, since she did not receive a competitive MCAT score to apply for medical schools. Encouraged by her sister, Amy, who was also motivated by a resident from Ross University School of Medicine, Kristen applied to RUSM. With RUSM's broad approach to interviewing applicants, considering more than just scores and GPAs, Kristen was accepted.

During college at SUNY Albany, Dr. Amy Alger continued to explore her medical profession options. She became an EMT and was President of the College Ambulance Squad, called Five Quad Ambulance. She was also a volunteer firefighter in her hometown of Syracuse on the weekends and during school breaks. After graduating with a B.S. in Biology, she remained on the Board of Directors for Five Quad Ambulance and worked as a Nursing Assistant at Albany Medical Center. She worked on the Medical Oncology Floor, and thoroughly enjoyed working with patients, but quickly became interested in the deeper aspects of diagnosis and treatment in patient care. It was there she met the RUSM Resident that encouraged her to apply to Ross University School of Medicine. She listened, encouraged her sister, Kristen, to apply also, and they were both accepted.

Starting at RUSM together in January 1998, the sisters thrived as they lived and studied together. Kristen received an award for scoring in the top tenth percentile on all 3 US Medical Board step exams at RUSM. The sisters made countless memories and lifelong friends in Dominica, they would often gather and hang-out at the 'Pink House' where a few of their friends lived. Also, they survived Hurricane Georges in September 1998 - they both recall sealing all the windows shut and hunkering down since they were unable to book a flight out; power and water were unavailable for a week after and they both remembered studying by candlelight for upcoming finals. Kristen also recalls an end of the year party, where they paddled on the river through the forest with the night sky only lit by the lantern at the head of their boat. As they slowly paddled, they made their way to a clearing and came upon a restaurant that was completely lit and ready for the revelers.

Dr. Rezak matched in general surgery at Stony Brook University Medical Center. During her residency, she was awarded the David J. Kreis, MD award for excellence in trauma surgery and was nominated administrative Chief Resident her final year. Upon completing her residency, Dr. Rezak continued onto other fellowships, including Post Bariatric Body Contouring Surgery at Beth Israel Deaconess Medical Center through Harvard Medical School. She then completed a Plastic and Reconstructive Surgery Residency at the Cleveland Clinic and a final fellowship in Microvascular Reconstructive Surgery at University of Pittsburgh Medical Center, after a few years in private practice. Dr. Kristen Rezak then continued on as an Assistant Professor of Plastic Surgery at Albany Medical College and practiced at Albany Medical Center, covering all aspects of plastic surgery, including cosmetic and reconstructive procedures.

Dr. Alger initially thought she'd specialize in Emergency Medicine, but realized she wanted to specialize in Surgery after completing her surgery clerkship in Brooklyn, NY. She matched at her first choice in surgery at Waterbury Hospital in Connecticut and learned she was drawn to trauma or trauma was drawn to her; it was incredibly busy every time she was on call. She followed up with a fellowship at Brigham and Women's Hospital in Surgical Critical Care and Acute Care Surgery. She continued and stayed on staff as the Attending for Trauma, Burn and Critical Care Department. Shortly after becoming an Attending, she joined the US Army Reserve Medical Corps to broaden her medical care experience. Currently, Dr. Alger is an Assistant Professor of Surgery at Duke University School of Medicine, and continues to care for trauma and critical care surgery patients and is still active in the US Army Reserves.

The Rezak sisters both found their calling to serve and help others early in life as they watched their aunt battle kidney disease and cancer. They took similar roads but their paths deviated as they both specialized in different surgery skills. Their paths have paralleled once again, Dr. Rezak recently joined her sister, Dr. Alger, at Duke University School of Medicine as an Assistant Professor of Plastic Surgery, specializing in reconstructive surgery for cancer, trauma and patients after massive weight lost, restoring in patients what they may have lost. They’ve both enjoyed confusing staff, patients and students since they are twins.