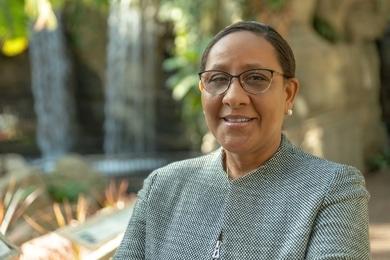 Dr. Rhonda McIntyre is the Associate Dean of Medical Sciences. Dr. McIntyre was previously the Dean of the Satellite Campus in St. Kitts for RUSM, focused on bringing learning and other opportunities to students on the Satellite Campus. While still serving in her prior role as Director of Health Services from September 2016 she brought with her a dedication to patient advocacy while delivering expert care. Her profession as a Pediatrician involved in medical education combined with clinical practice, comes against a background of many years of clinical experience, leadership roles and working in underserved communities.

Her portfolio includes Director of Health Services and Director of the RUSM HEART Training Center where she demonstrated her leadership and passion for improving lives through the enhancement of health care delivery by developing Emergency Cardiac care in the RUSM Community. She has been instrumental in forging a collaboration with the American University the Caribbean, AUC and merging their training site with the RUSM HEART Training Center.

During her long standing past role as Associate Professor (RUSM) and later professor of Pediatrics while serving as Head of Pediatrics at Princess Margaret Hospital she brought an infectious enthusiasm to learning the art of clinical Medicine amongst her students, both as a clerkship preceptor and as later Director of the Advanced Introduction to Clinical Medicine Program (2007-2014). In this role she taught both on the Miramar and Dominica PMH Campus sites organizing and facilitating small group learning and delivering large group lectures and brought a sought after rich clinical exposure to her students at PMH.
She took on the additional role as Director of the International Health Program in 2012 during which time she organized and led electives to International underserved locations such as Kenya and the Dominican Republic. The highlight of the International Health Program was the organization of two DeVry Education Group International Health Symposiums hosted in Dominica (2015) and in Fortaleza Brazil (2016). This program provided a platform for creating research opportunities for students amongst the DeVry Education Group.

Board certified by the Royal College of Physicians and Surgeons of Canada, a member of the American Academy of Pediatrics (AAP) and a member of the Section on International Child Health of the AAP, she is a graduate of the University of the West Indies with residency training in Canada at the British Columbia Children’s Hospital, University of British Columbia. She holds a Certificate in Healthcare leadership and Change leadership with Ecornell.

With her passion for social justice she is involved with NGO's serving humanity. She directs a nonprofit organization The Dominica Children's Heart Fund of which she is a founding member, engaging in fund raising and organizing tertiary care services for children with critical medical problems. She is a founding member of Doctors in our Circle an organization launched with the primary focus of assisting in the rebuilding of the Health Sector in Dominica post Hurricane Maria.

She is the recipient of two Ron Taylor Awards, the DeVry 2012 Pride award and the DeVry 2014 Teach award for “Doing well by doing good.”

“A survey of dietary habits in children younger than four in informal settlements in Nairobi, Kenya.” The Journal of Global Health, spring 2016 edition. Poster at AAP NCE 2016

A retrospective study of the clinical manifestations of the Chikungunya virus (CHIKV) infection observed in the pediatric patient population in Dominica. Oral presentation at American Academy of Pediatrics National Conference and Exhibition October, 2015 Conference Washington DC