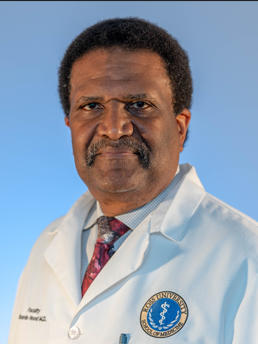 Dr. Ricardo Hood is presently Associate Professor and Vice Chair of the Department of Clinical Medicine at Ross University School of Medicine (“RUSM”).

In 1980, Dr. Hood received a B.S. Degree in Chemistry from Dillard University and in 1984, he obtained his Doctor of Medicine from Meharry Medical College. He went on to complete his residency training in Family Medicine at the Methodist Hospitals in Gary, Indiana in 1987.
Upon completion of his residency requirements, Dr. Hood practiced Family Medicine in Gary, Indiana from 1987 until 2014. He also served two terms as Health Commissioner for the City of Gary from 1993-1996 and 2007-2012. Dr. Hood further served as faculty in the family medicine residency programs at Methodist Hospitals and at Indiana University Northwest. He has provided clinical externships for the nurse practitioner programs at Indiana University and Purdue University Calumet. Moreover, he has served as clinical preceptor for physician assistant students at Samuel Merritt University in Oakland, California.

Upon leaving clinical practice in 2014, Dr. Hood joined RUSM as a full-time Associate Professor. He served as the Semester 3 Clinical Skills Course Director from 2014-2017. He is now the Director of Medical Simulation at RUSM.

Amongst other distinguished awards received by Dr. Hood personally and professionally, in 2015 he received the coveted TEACH award, the highest faculty award presented twice per year worldwide from DeVry University. In 2016, he received the Ron Taylor Award given to DeVry or Ross employees who have gone above and beyond their normal job function.
Dr. Hood endeavors to instill in his students a desire for serving others, innovative medical thinking and hands-on learning.