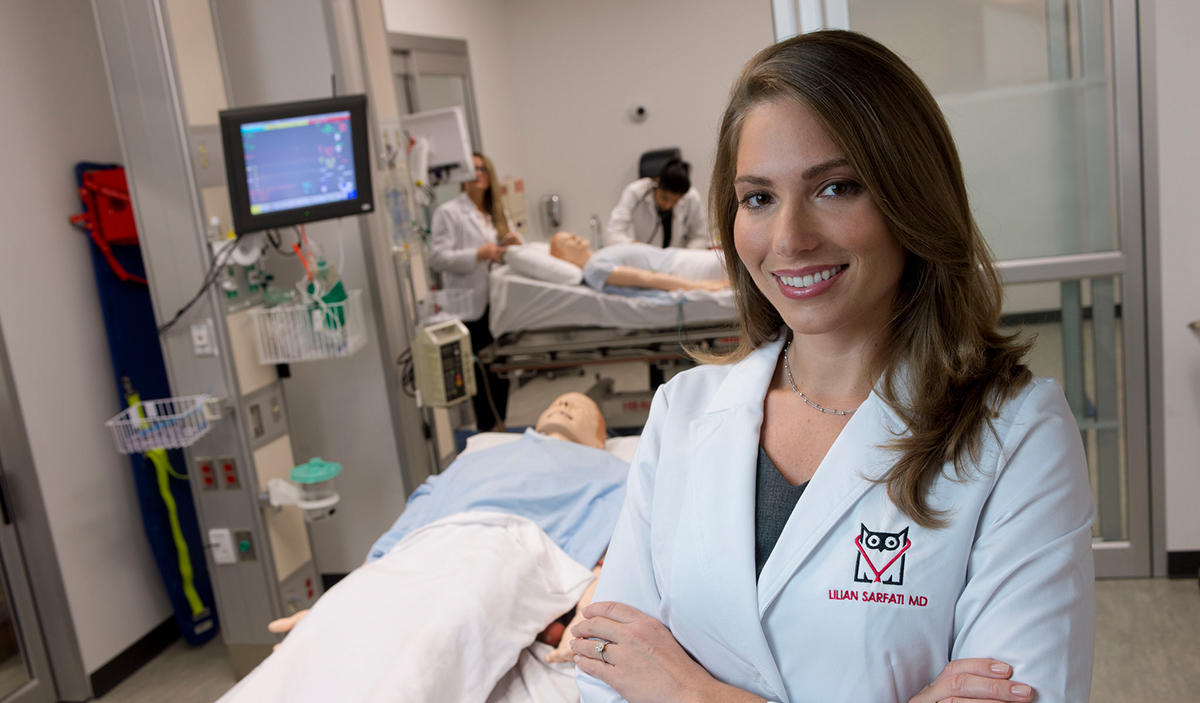 Dr. Sarfati’s now in Texas after completing residency and recently claiming one of two open spots for a dermatology fellowship at the University of Texas Health Science Center (UTHSC) at San Antonio.

There’s this story that Lilian Sarfati, MD (’12), likes to share about her first day of residency.

Sarfati and seven of her resident colleagues get pulled into a room. It’s just them, one nurse, and a patient on a gurney having a heart attack. It’s a patient safety simulation, to be clear—structured to help residents learn to work together as an organized healthcare team—and not a real patient.

But the stakes are still high. After all, it’s the first day of residency. You don’t want to mess this up.

“They threw us into this situation and they tell us ‘OK, just deal with it,’” Sarfati says.

So she thinks for a second, then jumps in, rallying her fellow residents. Okay, so how about you tackle this part of the exercise? she says to one. I’ll take over on this, and you guys can handle this part. “I was running mostly on intuition,” she remembers.

They complete the scenario, and after it ends, the coordinator pulls her aside. Asks her who she is, where she went to school.

“Lilian Sarfati,” she says. “I went to Ross University.”

“Wow,” the coordinator responds. “You impressed us. We thought you were from University of Miami.”

And to think she almost didn’t get an opportunity to go to medical school at all.

Four years later, Sarfati’s now in Texas after completing residency and recently claiming one of two open spots for a dermatology fellowship at the University of Texas Health Science Center (UTHSC) at San Antonio. That fellowship program’s run by Richard Usatine, MD, a nationally recognized leader in dermatology education for family physicians. Now, Sarfati spends five days a week performing minor surgeries and caring for patients with skin cancer, psoriasis, and other conditions.

“I’m in love with what I do,” she says. “All day long. Every day, I look forward to coming to work.”

Sarfati went into family medicine for two reasons: one practical, the other personal.

Her dad was a family practitioner who’d emigrated from Cuba to the United States more than 25 years ago to open his own practice in Hialeah, FL. As a small child she’d go into his office, either as his patient or to just spend some time with him. Her dream started there.

The other reason? While she was in clinicals in the United States, she realized something.

“I really picked family medicine because I fell in love with every single rotation I was on,” she says. By going into family medicine, she’d have a career that included the variety she’d enjoyed so much.

How She Found Her Opportunity

When she was in undergrad at NYU, her college advisor actually urged Sarfati against applying to med school, suggesting she go to nursing school or become a physician assistant instead. All because Sarfati had to repeat a chemistry class, and her MCAT scores were below the national average.

It wasn’t due to lack of ability or knowledge, though—she’d been in gifted programs in high school—but because she’d never had a chance to develop the right study or test-taking skills. But those blemishes would count against her in the application process.

“I thought, ‘Are you serious?’ I just spent four years crying in the library, trying to learn physics and biology and chemistry because of this dream,” she says.

So, at the recommendation of a family friend—a successful allergist—she entered a master’s program while simultaneously applying to RUSM. A week after she handed over the check for the master’s program, RUSM accepted her.

But she gave the master’s program a shot anyway, just to see how she felt about it.

“I’m here in a class with 50 other students, and this is probably one of 100 other programs. I’m taking the same courses I took at NYU, and I wasn’t learning anything different,” she says. “Everyone in this program is trying to beef up their resume to get into an American MD school—but there’s no guarantee.”

She considered the RUSM opportunity one more time.

“It’s two years on the island, two years back in the states [for clinicals],” she reasoned at the time. “So after four years total, I’d have my MD. That’s why I’ve been working so hard for the last five years.”

Sarfati made her decision.

When she got to the island of Dominica for basic sciences, she immediately formed bonds with members of her new medical school class.

“I think RUSM students have been humbled by the fact that they were at the top of their class when they were young, but something happened along the way—whether it was a test or a class in college or a personal emergency that forced them to take time off from school—that didn’t make them an optimal candidate for an American medical school,” she says. “But people go to RUSM, and they’re determined, and they’re thinking, ‘My goal is to become a doctor, and I’m going to do whatever it takes.’”

So Sarfati got to work.

There weren’t any distractions in Dominica, which enabled her to focus solely on why she was there in the first place – to study. To become a doctor.

But it didn’t come easily –she had to repeat her first semester at RUSM after failing an important biochemistry exam—but that didn’t stop her, and it helped her in the long run.

“At first, I was devastated that I failed the semester,” she says. “But I ended up happy, because RUSM put all of the repeaters into a group, where a tutor would give us different study strategies and learning methods,” she says. “I realized that reading, highlighting, and rewriting weren’t going to cut it for med school.”

Once she settled on the right strategies for her, her test anxiety vanished. She never repeated another semester, and she never failed a test again.

She Did it for Her Dad

Sarfati’s dad had always told her: Don’t let things paralyze you. Just keep going. You have to see the big picture.

So when she suffered the loss of Samuel Sarfati, her father, the man she’d called her best friend, her mentor, her everything, she just kept going.

Sarfati was in clinical rotations when he passed away at 63, and after it happened, she felt him guiding her.

“He was with me,” she says, “telling me, ‘No. Don’t sit around grieving for me. Don’t throw away everything you’ve worked so hard for. Show them how passionate you are, how dedicated you are.’”

The added support from fellow students, attending physicians and residents at Cleveland Clinic, FL—where she was undergoing her internal medicine sub-internship—helped, too. They shared personal stories about how they, too, suffered losses while they were medical school students.

“They all empathized with me, supported me,” she says. “I felt like it was better that I was there [in clinicals] than at home suffering about it. It just made me stronger, and it helped me to keep pushing.” After she passed Step 2 of the United States Medical Licensing Examination®—six months after he passed—she was able to properly grieve.

“When I got accepted into the [Jackson Memorial residency], he was my main motivation,” she says.

A Residency That Was a Great Match for Her

When she graduated in 2012 and attained her residency, she found it was a true match for her. “I had a nice chemistry with everyone—not just with my peers, but with my attendings and with my patients,” she says. “It was good, but I’m not going to lie—it was hard. So I was lucky I had developed a relationship with my peers. We were there to help each other out.”

That kinship helped when Sarfati experienced another devastating loss—her mother, Irene, to stroke. And once again, the people around her rallied to support her.

“I brought my mom to the hospital where I worked—and the people were so supportive. They gave her VIP treatment,” she says.

“I was lucky that the quality of the education we were able to get at Ross and my residency program helped me take care of my mom for the four years she was sick at home,” she adds. “Thank God I had that opportunity. Had I not had this, I would have felt completely helpless, so I’m grateful for the knowledge I had.”

Focused on the Future, Wherever it Leads

Sarfati’s path to practicing medicine was filled with ups and downs, all delicately connected, steering the course to her success. But she made it, and she sees nothing but bright things ahead.
“I’m not sure what I’m going to do next,” she says. Option one: teach part-time at the University of Miami, passing along her dermatology knowledge to the next grout of Jackson Memorial family medicine residents. Option two: work for her father’s former practice, which is still in operation under different ownership.

Her third choice? “I really, really want to work in dermatology, to practice as a family medicine-trained skin specialist,” she says.

No matter which option she goes with, one thing is clear: it all started with one opportunity, and she took it, and turned it into many.